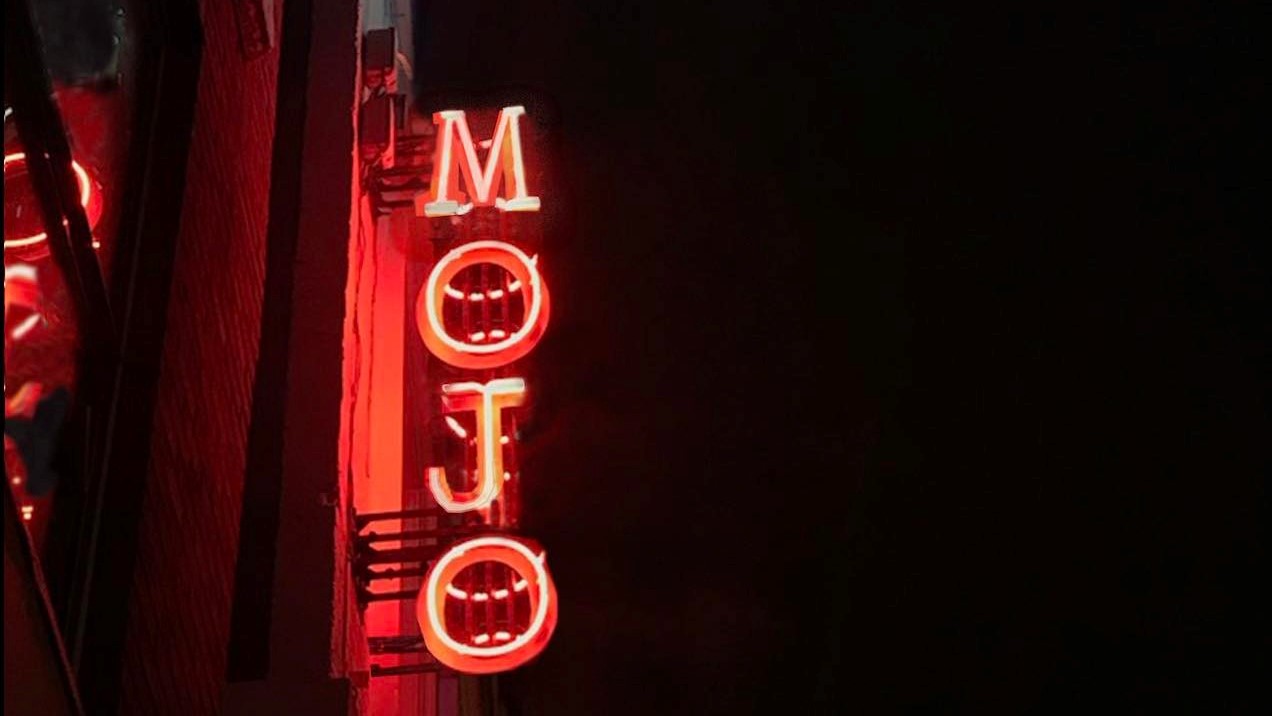 50s rock ‘n’ roll, seedy clubs, pill-popping gangsters – Jez Butterworth’s Mojo has it all. Nocturne Productions’ staging of this 1995 play, directed by Max Morgan at the Michael Pilch Studio in third week, lives up to the sleek grittiness of the nightclub scene in 1950s Soho, where gang strife, self-interest, and drugs collide to disastrous effect.

As the audience came into the Pilch, we were transported from the streets of Oxford into the chic and sinister interior of the Atlantic Club. A couple of whiskey bottles and playing cards, and a sickly-sweet cake, lie on a table in the centre of Teagan Riches’ set, and the walls were decorated with silver tinsel fringe banners, capturing the glitzy sheen which disguised the reality of club corruption in the 50s. For opening night, guests were encouraged by a Facebook post from Nocturne Productions to come in an outfit as part of the dress code of “50s-Soho-Kit-Kat-Club”. A marketing power move, for sure – the Pilch was buzzing with an audience ready to be immersed in the thrill of the evening. And what a thrill it would be.

Mojo tells of two gang leaders from different nightclubs bound in bloody discord over Silver Johnny (Izzy Lever), a sensation on the rock ‘n’ roll scene who is destined for stardom. Caught in the centre of this fight between the big-dogs are Potts (Leah Aspden), Sweets (Emma Pollock), and Skinny (Sam Thomas), who, following the brutal murder of their leader Ezra, are driven witless with fear for their lives in a world which is anything but gentle. With the addition of Ezra’s menacing son Baby (Noah Radcliffe-Adams), as well as Mickey (Stepan Mysko von Schultze), Ezra’s second-in-command who is burdened with trying to figure out their next move, the gang’s unity against their common foe is compromised by internal conflicts.

Butterworth’s script is bursting with opportunities to portray scenes of high tension, and the production takes on each one with a riveting conviction. To say that Mojo is suspenseful would be an understatement – the audience was gripped for the duration of the play. Particularly tense dialogues are punctuated by a beat played by drummer Will Wilson, heightening the chilling crescendo of scenes like the delivery of an ominous silver box which may or may not contain the confirmation of their worst fears.

The cast is fantastic. Although it would have been easy to fall into a caricaturesque portrayal of Butterworth’s larger-than-life characters, each actor embodies their role with a nuance never verging on the farcical. In the play’s most explosive moments, their emotions collide and coalesce to heart-stopping effect, reflecting the disturbing inevitability of the chaos caused when drugs and fear mingle.

Thomas is wholly believable as Skinny, one of the more timid members of the group who shrinks under Baby’s psychotic dominance. Indeed, the clashing dynamic between Skinny and Baby is one of the most entertaining to follow, with Skinny’s indignant gutlessness evoking sympathy in the face of Baby’s brutish bullying (and in the face of his cutlass).

Having seen Radcliffe-Adams in A² Productions’ staging of Harold Pinter’s The Dumb Waiter in Hilary term, I had high expectations for his portrayal of Baby in Mojo. Eerily composed throughout the play, and delivering his lines in calm, steady tones, Baby’s nonchalance resounds unsettlingly against the others’ paranoia. Aspden and Pollock make a hilarious pair as Potts and Sweets, their quarrels over baked goods underscoring the greater turmoil that is at hand. Mysko von Schultze’s Mickey is by turns domineering and meek, trying to conceal how shaken up he is by the threat posed to the gang, and, especially, to him.

The cast handles the dark humour of Mojo with a master’s stroke. The line “my piss is black” (from the new-fangled pills they have been taking) has as much oomph by the time it has been said for the umpteenth time by the umpteenth character as it does the first time.

Allegiances are shaken and questioned, betrayal occurs to the worst degree, and there is blood, blood, blood. Potts laments that he’s had “nothing but sorrow and birthday cake since sun up”, which fittingly encapsulates the essence of Mojo.

You would not guess that this is Nocturne Productions’ first show. Mojo has set the bar high for their upcoming productions, and has proved that they are a vibrant new student theatre company to look out for.