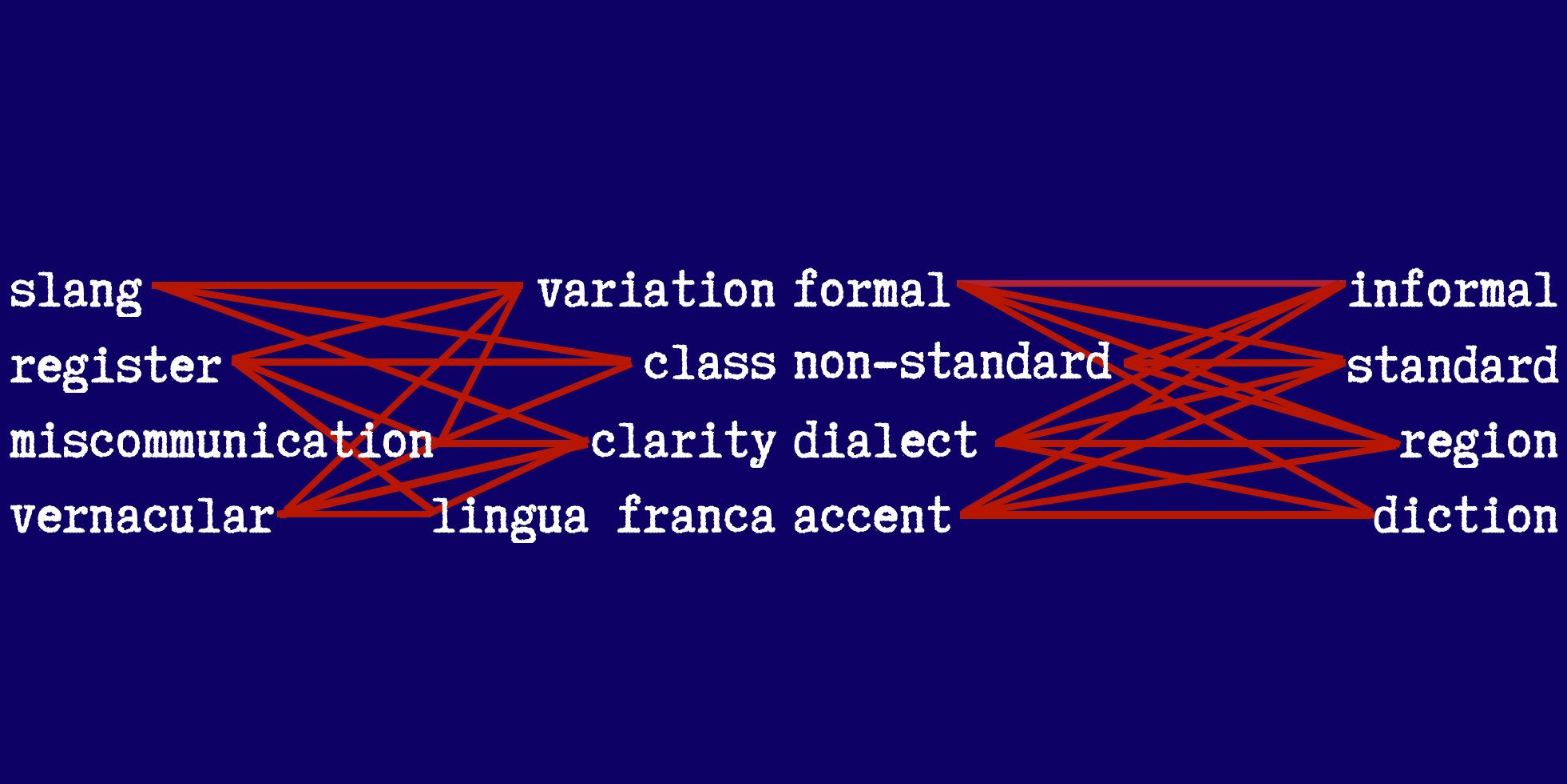 In many classrooms, slang is something forbidden, a recent example being  a London secondary school’s decision to ban words such as ‘bare’, and fillers including ‘basically’ and ‘like’. The idea behind this is that pupils should always use and speak Standard English, as would be expected in formal situations such as interviews. Concerns about slang appearing in pupils’ work, however, cannot be solved by a ban on ‘bad’ English – arguably,  a person’s decision to only use Standard English must be a conscious choice. ‘Code-switching’ is the ability to alternate between language varieties and could be positively encouraged in schools, as suggested by Michael Rosen, the author and professor of children’s literature, who believes that teachers should study the use of everyday language with pupils whenever possible, and questions why different words are used in different situations.

He gives the example of discussing Shakespeare’s use of the slang word ‘coz’ in Romeo and Juliet, a contemporary contraction of “cousin,” to initiate an interesting discussion about how dramatists use language. Rosen also states that we are all capable of being ‘bidialectal’, i.e., speaking more than one kind of language, and there is no evidence that speaking one dialect prevents you from speaking another. It is therefore far-fetched to assume that young people are incapable of communicating differently in different situations. As with our behaviour, we adapt our language according to the situation and the way a person speaks outside of formal settings is not substandard simply because it is nonstandard: for instance, it is considered perfectly normal to speak to your boss in a different way than you would speak to a fellow employee.

Slang usually refers to spoken rather than written language and is considered informal. Anything that falls outside of Standard English can be interpreted as slang, and it comes in many different forms: street slang; slang associated with different dialects; internet slang to form a unique online culture of communication; political catchphrases such as ‘Brexit’, a type of slang, have even become sensationalised. Standard English also suggests that that there is a superior culture that needs to be defended against incursions from non-white and lower-class speakers, which stands in opposition to ideas of diversity. It is therefore worth questioning if slang should be seen as ‘bad English’, or whether we are simply experiencing a shift in our mode of communication to shape everyday language.

Teaching slang as part of standard language teaching is controversial. Whilst it may be considered to be an inferior use of language, it can also be seen as an essential part of everyday communication and therefore necessary to learn. As a modern languages student studying German, I would appreciate a greater emphasis on the importance and usage of everyday language: Denglisch (Deutsch and Englisch, i.e. Germans using English in everyday speech) is a lot trendier than I thought! Of course, language-learning requires standardisation and regulation, but grammar and vocabulary learnt in a classroom are often very different to the way people communicate on the streets (someone once told me I sounded like their grandmother because the language I had learnt was stilted and outdated). In the same way that it can be useful to learn the slang of other languages, it is also beneficial to acknowledge pupils’ use of slang in the classroom and to discuss how language evolves and can be used appropriately, instead of dismissing it as bad communication.

Alongside the development of internet jargon, political buzzwords are equally used to talk about important issues quickly and easily, which become ingrained into daily language. Slang is one of the ways through which languages develop new vocabularies and acquire new meanings to define and embody important world events. In Germany, a Word and ‘Un-word’ of the Year (Unwort des Jahres) are selected annually by linguists, taking words suggested by the public to encapsulate significant events. Language is constantly evolving to reflect reality and an analysis of it reveals how people think, interact with each other, and how words – regardless of whether they appear in official dictionaries – reflect and define contemporary history.

Modern Standard English, or the Queen’s English, is considered to be a prestige dialect and is therefore associated with power and class. The Queen’s English Society defines itself as ‘a guardian of proper English’ to defend against a linguistic decline, suggesting that knowledge of a language and its grammar is associated with reason and intelligence. But is a ‘linguistic decline’ possible, and is it reasonable to assume that one particular form of English is superior? Such a vast number of different dialects did not exist until recently, given the rise of social media and the fact that people often write online in the same way that they speak. But concerns about a crisis of language seem far-fetched given the lack of evidence that we will one day, according to John Humphrys, ‘communicate with a series of grunts’.

English is constantly evolving, perhaps more so in recent years, and older generations can see these changes taking place, but slang does not reduce a person’s expressive capacity, and can be seen as an opportunity for diversity. Some forms of language are valued more than others in certain contexts, an example being at university, where a student from a working class background may feel compelled to adopt a certain tone, possibly contrasting with how they would usually talk. Thus, (classist) assumptions are often made about a student’s ability depending on their dialect. English has also become an international language, used both online and in politics, which suggests the opposite of a decline.

In many ways, a limitation on people’s choice of expression through speech seems illogical and rash. The UK is increasingly divided by class and cultural differences, and rather than reinforcing assumptions that anything other than Standard English is inferior, awareness and discussion around different forms of dialect are an opportunity for unity and to seek to understand the value of different language forms.