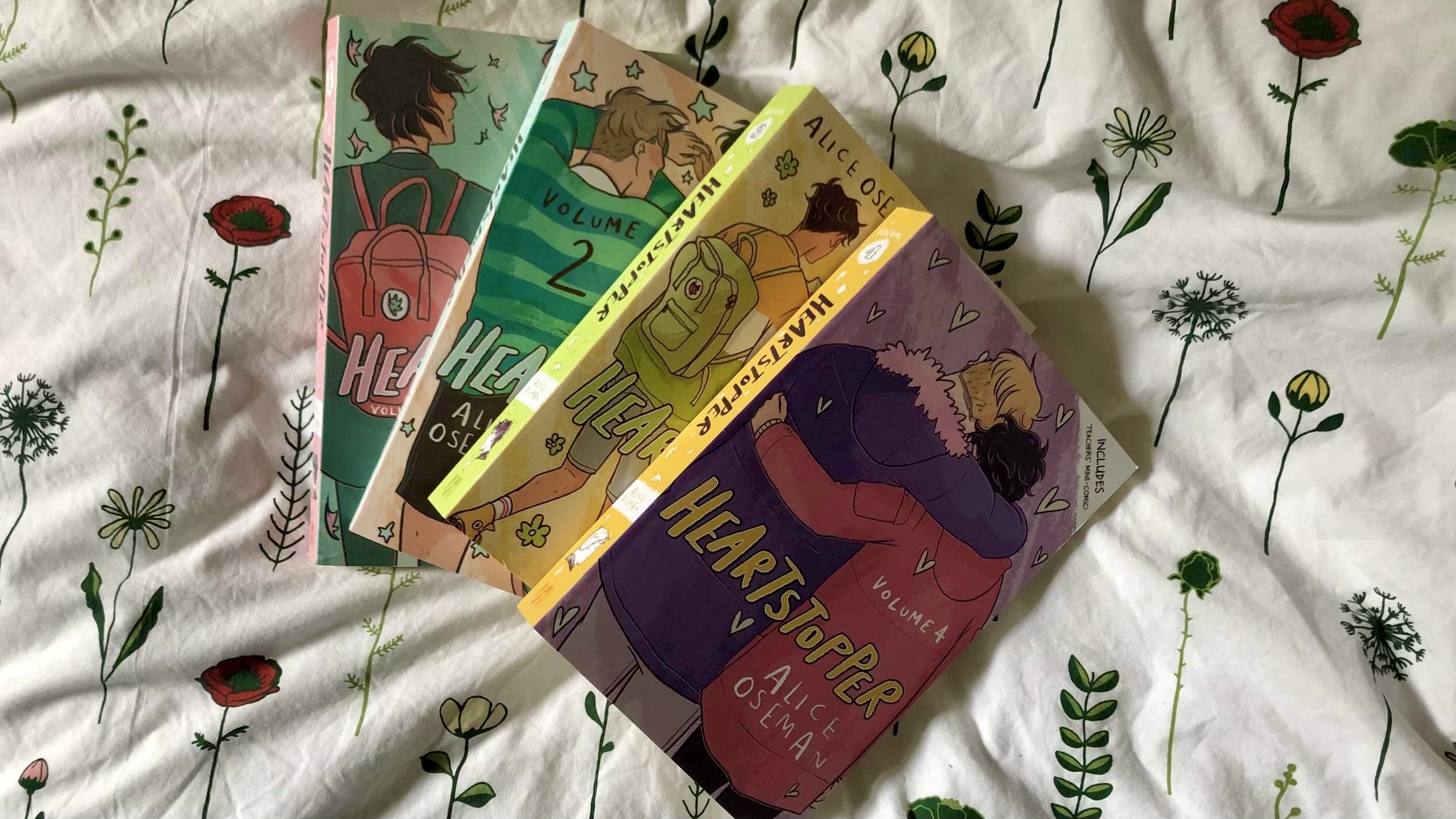 Originally posted as a webcomic series on Tumblr in 2019, Alice Oseman’s Heartstopper became an instant hit. It has been adored internationally for its sweet portrayal of young, queer love and friendship. The series grew so popular that Oseman was able to source funding to self-publish a limited print edition of the first volume in just two hours. Publishing houses took note of her success and Hachette Group later bought the rights to publish all four volumes, with a fifth and final instalment set to release in February 2023.

This is not, however, Oseman’s first foray into the world of Young Adult literature. They secured their first publishing deal at the age of just 17, and their debut novel, Solitaire, features Charlie from Heartstopper‘s older sister, Tori, as the protagonist.

It was announced in January 2021 that Heartstopper was going to be adapted to live-action with Joe Locke and Kit Connor as Charlie and Nick. And, when the series finally landed on Netflix this spring, it quickly took the world by storm, racking up millions of views in its first week and obtaining a legion of new, adoring fans.

Having read the first volume around the time of the first casting announcement, I finally finished the series the day before the show’s debut, before proceeding to buy myself the series in print soon after – this is testament to just how much I enjoyed this story. Not only does Oseman’s exploration of first love amongst queer teens feel both nostalgic, sweet and resonant, but the graphic novels themselves are also compulsively readable, with me finishing all four in under two hours.

Charlie Spring is one of the only out gay boys in his school and he’s suffered for it at the hands of bullies in his last year. His story begins at the start of a new term where he is seated beside Year 11 ‘rugby king’ Nick Nelson, the subject of his seemingly unrequited crush. It’s a familiar setting that makes it all the more relatable for both teens and young adults reading the series, and the sweet friendship and love of the two main characters is hard not to be instantly and totally swept up in. What Oseman captures perfectly through both their art and characterisation, is the jolt of first attraction and the swift, insecure blossoming of first love. With Nick and Charlie, there is no drama or toxicity, and their wholesome relationship is the beating heart of the novels.

Entwined with the wholesome depiction of young, queer love are profound and honest explorations of what it looks like to be young and questioning your sexuality and your social circle which seems, at that age, to be everything that matters to you. Oseman writes Nick’s inner turmoil with real care, providing not just joy within the novels but a place of comfort and solace for young readers as well.

The show was praised for its heart-warming representation of queer joy and love, and the graphic novels, too, are suffused with this. However, as the novels progress, Oseman introduces harder-hitting themes: Charlie grapples with an eating disorder and mental health struggles, namely depression and OCD. I’d be lying if I said the later novels didn’t leave me sobbing as I read them during the early hours of the morning, but the honest exploration of such struggles are vital for young readers to have access to and I think Oseman handles them with deft tenderness.

Another standout aspect of the series is the superb cast of supporting characters. From Charlie’s wonderful friendship group, Elle, Tao, Isaac, Darcey and Tara, to Nick’s supportive mum (played by none other than Olivia Coleman in the TV show), the supporting cast help to round out the graphic novels and remind readers of the joy and importance of strong support networks – be they relatives or not. However, it’s not all sunshine and rainbows, the friends sometimes clash heads and aspects of both Nick and Charlie’s home lives aren’t easy for them to cope with, neatly blending the highs and lows of personal life that most people can relate to. But, regardless of the struggles Nick and Charlie face as a couple, what endures throughout the series is the strength of their love for one another and the enduring support of the friends they have around them. It’s a wonderful message to young readers picking up the series in a world littered with negative depictions of and attitudes towards queerness, that everyone is every bit worthy of joy and love, and that family, if not the ones you are given, can be found and made elsewhere.

To ask whether or not the graphic novels live up to the hype of the smash-hit Netflix series seems to miss the point. These books, adapted to screen by the author no less, are the blueprint for the show and provide every inch of much joy and warmth as its adaptation.