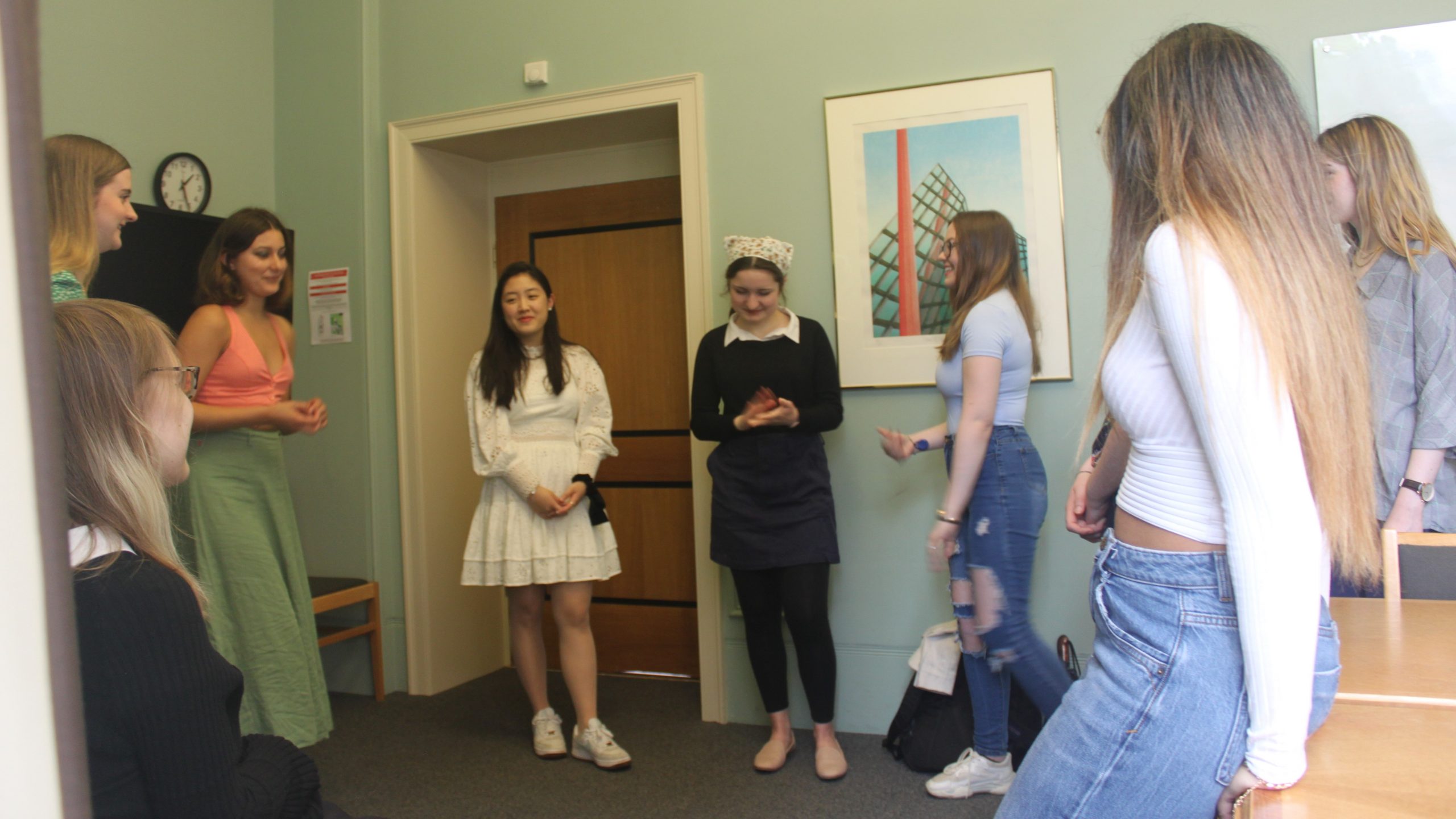 Caryl Churchill’s 1982 play Top Girls is considered one of the best and most influential British plays of the 20th century, exploring what it took for a woman to succeed in 1980s Britain – and it’s coming to LMH Arts Week in an exciting new staging by Oxford students. Cherwell Stage spoke to co-directors Bella Stanford-Harris and Flora Symington, and producer Mia Hollingsworth-Smith, about their experiences working on Top Girls.

What drew you to Top Girls?

Bella: I am an LMH student, and I wanted to get involved in LMH Arts Week. Caryl Churchill is an alumna, and still has links to the college, so she’s very much present in college life. It is quite a big moment for LMH drama to be able to stage her play. The feminist history of the college is something we always hear about, so it’s nice to be able to pay homage to that.

Flora: I did a bit of research into [Caryl Churchill], and she was very involved in student drama here, so this is very much taking us back to its roots. I think it’s such a good use of theatre as a form, because you have the visuals with which you can present onstage two concurring narratives that are both true. She’s used the form to examine the ways women can and can’t be successful in such a brilliant way. Every play Caryl Churchill writes has revolutionised theatre. I’ve never directed before but I thought if I were to direct something it would be this.

Mia: I love how the play’s socio-political messages are shown in an almost didactic Brechtian way with its episodic structure, historical characters and absurdist scenes, but at the same time it has moments of lovely moments of realism – dramatic family scenes that really expose the destructive effects of Thatcherism.

This is your directorial debut. How has your experience been directing a play?

Bella: It’s so interesting being on the other side [of theatre production]. I acted quite a lot at school, and I always thought how interesting it would be to direct. Having ideas as an actor, but not really being able to implement them because it’s the director’s role, is now a fantasy come true.

Flora: It is a collaborative process, but sometimes you think ‘I would have done this differently’, or made a different decision. But I find it’s the same on the other side; [as director] I think, ‘I want to be acting in this!’. The cast have been so good to work with. They have their own ideas which they bring to it, and they’ve been very receptive to us.

Top Girls is set in 1980s Britain, with the rise of the right wing and Thatcherism, as well as feminism. How have you tackled the political side of the play?

Bella: I think it speaks for itself. It’s hard to pinpoint the political message of the play. We know Caryl Churchill is quite active in left-wing politics, but if you didn’t know that and watched the play, you probably wouldn’t be able to tell. That’s why it’s so interesting for an audience to take what messages they will from it.

Flora: The way that it’s written elicits sympathy for both sides. I think ultimately the play does come down on the left, but it speaks for itself. It would be very easy to write a left-wing play that just exposes all the problems with Thatcherism but [Churchill] hasn’t done that, she’s done something more complex.

Flora: It’s unusual to see a production where the cast is all women. It gives you space to bring out so many different aspects of the female characters. Removing men from the equation gives a new complexity to it, as women now embody all of these positions.

Bella: All of them are complicated, and it shows famous women from history, who are an interesting comparison with the modern day characters.

Flora: For a 2022 audience, we would probably all sympathise more with Marlene, who is also very socially right wing. It will complicate people’s sympathies, and I hope they will leave it thinking there’s more to this kind of politics than they would first imagine.

Mia: I think the 80s setting really highlights how Marlene on the one hand reflects the feminist aspects of female figures of power like Thatcher but at the same time shows how Thatcher’s power was destructive. Coming from an ex-mining town myself, I definitely relate to the destructive effects of Thatcherism, especially on small communities. The way Marlene chooses her career and essentially abandons her family is reminiscent of Thatcher’s capitalist mentality of “there’s no such thing as society”.

Any memorable moments from rehearsals?

Flora: My most memorable moment was the first time we rehearsed Act 3, and we had the two principal members of the cast in the room together for the first time, and it was chemistry. Magic.

Bella: That was the first time I took a step back from the play and saw it as if I was an audience member.

Tell me something that would only make sense if you’ve seen the play.

Flora: There’s so many things that don’t make any sense! “You can kill someone with a brick.” That’s all I’m going to tell you. [Starts leafing through script] “Bums have faces in hell.” I’m trying to find Joan’s speech because I feel like that’s my favourite bit of the entire production.

Bella: When you give birth during a papal procession.

What makes your production of Top Girls unique?

Mia: I think our production of Top Girls is different because the recent #NotAllMen movement, sparked by the tragic murder of Sarah Everard, means the issues the play raises about feminism are demonstrated in a new light that is especially relevant to a contemporary audience – and our wonderful actors portrays them in a really refreshing way!

Flora: We’ve thought a lot about Act 1, which doesn’t relate to the rest of the script chronologically. It takes place in what we would now class as a semi-real, semi-surrealist space. It could be a dream, but could also fit into the surrealist landscape of the play. We’ve changed the order of that, so that that’s not the first thing you see. We’ve put a different scene at the start. I think nobody can come out of this with a clear view on what they think. It will make people question their own views, hopefully, and make people realise that it’s always more complicated than it appears at first sight.