‘You know that you’re witnessing history’: CNN’s Clarissa Ward at the Union

Charlie Hancock reports from the chamber. 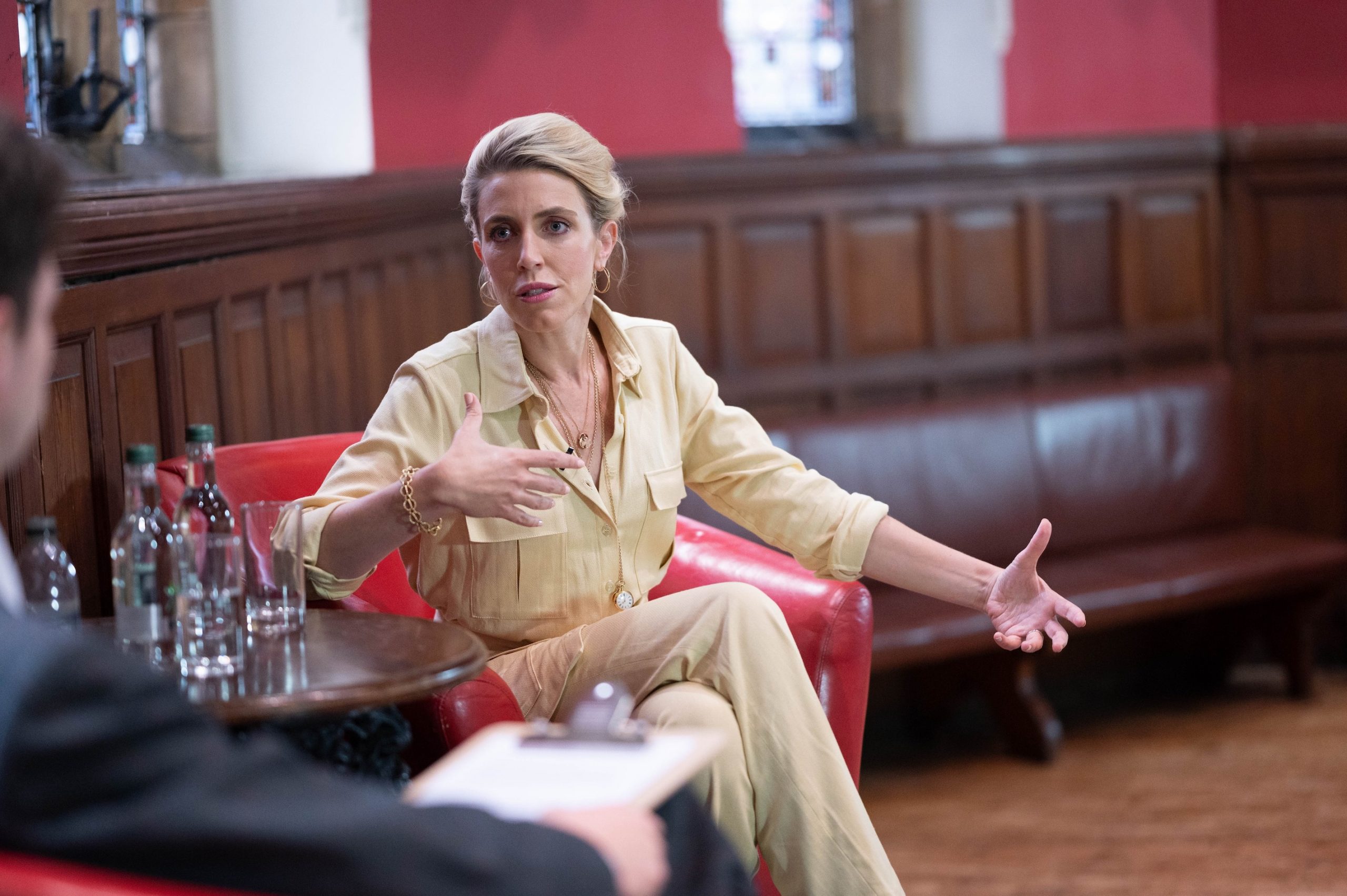 Charlie Hancock
Charlie is reading Human Sciences at Hertford College. After working as a News Editor and Deputy Editor, she was co-Editor in Chief with Jill Cushen for HT22.
3rd June 2022

Kharkiv, 24th February, 4am Kyiv time. No sooner had Vladimir Putin finished an impromptu speech in which he announced the start of a ‘special military operation’ in Ukraine, then the first artillery barrages of the war began. The off-record intelligence Clarissa Ward and her team had received from CNN’s stateside offices was correct: Russia was going to invade Ukraine.

Addressing an audience at the Oxford Union, the CNN Chief International Correspondent said she’d considered the prospect of war “crazy”. In spite of the increasing presence of Russian troops along the Ukrainian border, Ukrainians she’d spoken to did not seem to think – at least publicly – that Russia would invade. Neither did many journalists who had covered the 2008 Russo-Georgian war and 2014 annexation of Crimea. It didn’t make sense. “There was no clear victory for President Putin to achieve. And even at that stage, with a much different understanding of what that would look like and how quickly the Ukrainian forces would capitulate, it still didn’t seem to make any sense,” she said.

The imminent threat of a war which wasn’t seeming to materialise could have been part of a strategy for Russia to achieve diplomatic objectives. But after Putin gave a speech on 21st February in which he recognised the independence of the Donetsk and Luhansk People’s Republics, two seperatist-held regions in Eastern Ukraine, she realised “there was always going to be a war”. There was no bluff.

“Not only do you know that you’re witnessing history,” she said, recalling the first attack on Kharkiv. “You know that you can’t fully get your arms around everything that’s happening. But you also know that your only job is to be on air and describe what you’re seeing.”

Born in the UK and educated at Yale University, Clarissa Ward started her career as a journalist in the aftermath of the September 11th Attacks. She told the Union that, like many Americans, she felt a sense of a “calling” after the Twin Towers fell, and wondered what her role in responding to that moment could be. She was struck by the misunderstandings and miscommunications which led to the attack, and became fixated on finding out not only who was responsible, but how the world saw America versus how America saw itself.

Her first overseas job was a three month long internship at the CNN bureau in Moscow. After that, she wanted to get a job in the newsroom. CNN was her first choice, since she started watching it “religiously day and night” after 9/11, but they were unable to immediately offer her a job. Instead, she was hired by Fox News to man the night-shift. “I had no life, I had zero life”, she said, comparing how close she felt to achieving her dream in Moscow to how far away it felt at that point. But the night-shift meant that Ward could talk to journalists in Baghdad when they woke up seven hours ahead of New York. After experiencing the invasion of Iraq vicariously through their dispatches, she convinced Fox News to send her to Baghdad, where she quit her job and established herself as a freelance journalist based in Beirut.

Ward was never interested in pursuing a career covering domestic politics, and even turned down an offer to be on the Presidential campaign trail with Hillary Clinton. Being an international correspondent has allowed her to be a witness to many of the most dramatic events in recent history, including the 2011 earthquake in Japan and conflicts ranging from Iraq and Afghanistan, to Yemen and Syria.  When asked about how much agency she has to choose the stories she pursues, she told Cherwell that while she knows that it’s necessary for her to cover massive stories when they break, she is able to pitch and cover stories she feels passionately about. One under-the-radar story she investigated in 2019 to Emmy-winning success was the Russian government’s deployment of mercenaries known as the ‘Wagner Group’ in the Central African Republic.

Ward also worked with Bellingcat to investigate the poisoning of Russian opposition figurehead Alexey Navalny. She told Cherwell that she had not done any stories with Navalny’s Anti-Corruption Foundation since the 2020 investigation, but has remained in touch with Navalny’s team.

When asked by Union Librarian Charlie Mackintosh about the most challenging environment she had worked in, Ward described how several of her colleagues and friends were captured by both the Assad regime and ISIS when covering the war in Syria, adding “the situation became so dangerous that journalists basically stopped going for very good reasons”. In 2016, she went undercover in rebel-held regions of the country, and was later invited to speak at the UN Security Council about the horrors civilians were living through. “My first day on that trip we saw a fruit market get bombed for no reason. A ten year old boy, two women, and a handful of other people were killed,” she told the Union.

“When you come back from a place like Aleppo, you really struggle to embrace joy and love,” she replied to a question about how she takes care of her mental health after working in combat zones. She described how while she could feel like people at home don’t understand the environment she’s returned from, it’s crucial to reintegrate into everyday life. She also stressed the importance to journalists of finding outlets such as therapy to deal with the traumatic events they witness.

“You’re not always the cleverest person in the room,” she said when asked what advice she had for students at Oxford University at the end of her talk. “And if you are, it doesn’t matter because you can learn so much from listening. I feel like as a culture, we’ve lost track of that. Listen, be curious, and be open.”