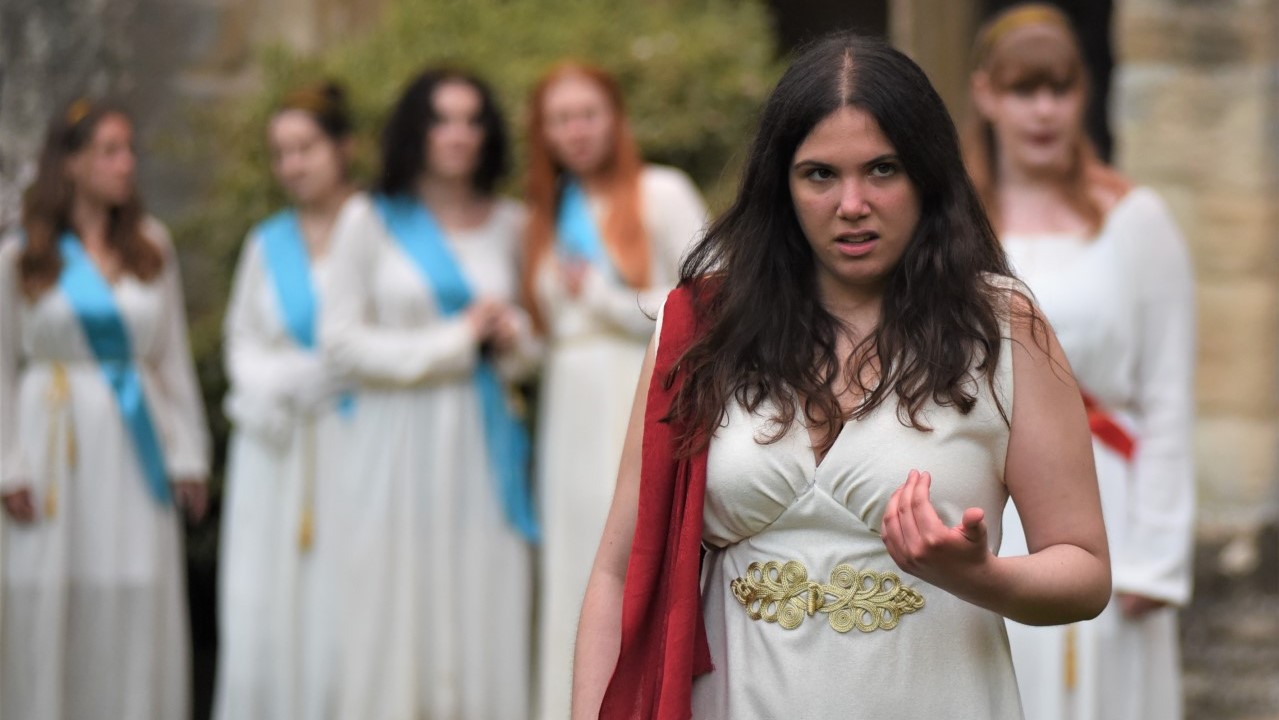 There is little quite so devastating and unexpected as a mother murdering her own children. The mindset and motivations behind such a deed are inexplicable – but this is precisely what fifth century Greek playwright Euripides explores in his tragedy Medea. The play, first performed at the dramatic festival at Athens in 431 BC, continues to inspire conflicting feelings amongst its audiences almost two and a half millennia later. This week, the New College Classical Drama Society staged their interpretation of this contentious play, transforming the New College cloisters into a fifth century Corinthian palace.

Featuring a considerable contingent of New College students in both the cast and the crew, this year New College’s annual Greek play was directed by Old Member Andrew Whiffin, who graduated in 1973. This is the first time the Greek play has not been directed by David Raeburn, acclaimed classicist and translator, who sadly passed away in 2021. The translation used for this staging of Medea is his – as stated in the programme, this decision was in “tribute to his unique contribution to New College Classics”.

New College’s Medea begins with an intensity that establishes the play’s consistently heightened emotional tone. Emily Osborne as the Nurse imbues every word of her opening monologue with the suitably frantic energy of a woman frightened and distressed by her raving mistress, who is threatening “death to the whole house”, as we soon find out. Indeed, Medea is a play with foreshadowing aplenty: the Tutor (Mortimer Blyth) reinforces the tension, stating that “there’s worse to come”.

The first we experience of the protagonist (or perhaps antagonist) herself is the sound of her terrible screaming from inside the cloisters. Medea (Emily Hassan) is not yet visible to the audience, but her shouts of “io! io!” resound chillingly through the quad, preparing us for the thunderstorm that is to come. We share in the mounting trepidation of the Chorus of Corinthian women, played by eight cast members, plus a Chorus leader (Paige Allen), who are worried that “sorrow’s tide is powerfully sweeping in”. How right they are.

As Medea, Hassan’s powerful voice has inflections of rage and heartbreak in turn: she laments the sorrow of her situation, then seethes over Jason’s betrayal before plotting ways to wreak hideous vengeance. She is a truly frightening figure as she stalks the quad, coming right up to the audience and looking them in the eye as she delivers some of the most acerbic lines of the play.

Jason (Syren Singh), who has given up Medea for a new wife, is insufferably conceited and chauvinistic. Entering the stage resplendent in blue and gold, Jason gloats over Medea, his irritatingly blasé attitude in marked contrast to her aggravated state. Singh’s voice conveys the rhythmic undulations of Euripides’ metre, echoing the original Greek verse form of the play; Raeburn’s modern but melodic translation allows for this homage to be paid to the way in which the tragedy would have been performed in the fifth century BC. The Choral odes likewise show a keen awareness of the metrical nuances of the original Greek text, a true feat for a performance in English.

Flawless and subtle is Hassan’s portrayal of Medea’s trademark duplicity. After convincing an initially unrelenting Creon, whose nervous firmness is well conveyed by Kilian Meissner, to allow her to stay one more day in Corinth before her departure into eternal exile, Medea glances stealthily at the audience, and the traces of a smirk on her lips betray her true, malicious intent. Our dread on behalf of Creon clogs the evening air. We witness again Medea’s chilling smile when she successfully manipulates Aegeus (Danny Doyle-Vidaurre) into promising her asylum. Doyle-Vidaurre’s cheery portrayal of Aegeus affords a welcome moment of respite from the overall gloom of the play.

A particularly memorable scene is the Messenger’s (Ailbhe Sweeney) recount of the death of Princess Creusa and Creon. Sweeney singlehandedly and brilliantly re-enacts the horror of this scene; she physically recreates Creusa’s movements as the princess, poisoned by Medea’s deadly robe, “staggered sideways, her limbs all shaking”. Her own repulsion at the sight of Creusa’s flesh “oozing away from her bones” makes the audience recoil – it is entirely believable that she has witnessed this terror. All the while, Medea revels in the “hideous agony” Creusa and Creon suffered by her doing, her laughter clashing unnervingly against the Messenger’s stricken tone.

As the June sun sets, plunging the cloisters into soft orange-lilac light, the sun likewise sets on Medea’s relationship with Jason and her children, and we reach the explosive climax of the play. Blood-curdling screams of children from offstage confirm all our worst fears; the audience shudders in the cooling evening air. Jason and Medea’s final altercation takes place over the expanse of the quad, Medea standing in the cloisters and Jason on the grass, with the audience physically caught between them. I had wondered how the team would pull off this final scene, in which Medea traditionally stands in a chariot suspended above the stage, but they made excellent use of the space afforded by the New College cloisters to reflect the irrevocable emotional separation between Jason and Medea.

It is at this point that Jason’s hitherto haughty demeanour finally peels away, and he is left a shaking, stammering wreck as he begs Medea to allow him to hold his sons’ corpses one last time. The role reversal is striking, horrifying and poignant; it is here that we truly sympathise with Jason.

In advance of opening night, the Classical Drama Society had asked followers on social media, “are you #TeamMedea or #TeamJason?” A mark of a truly successful staging of Medea, the audience left New College’s production as torn about this question as ever.