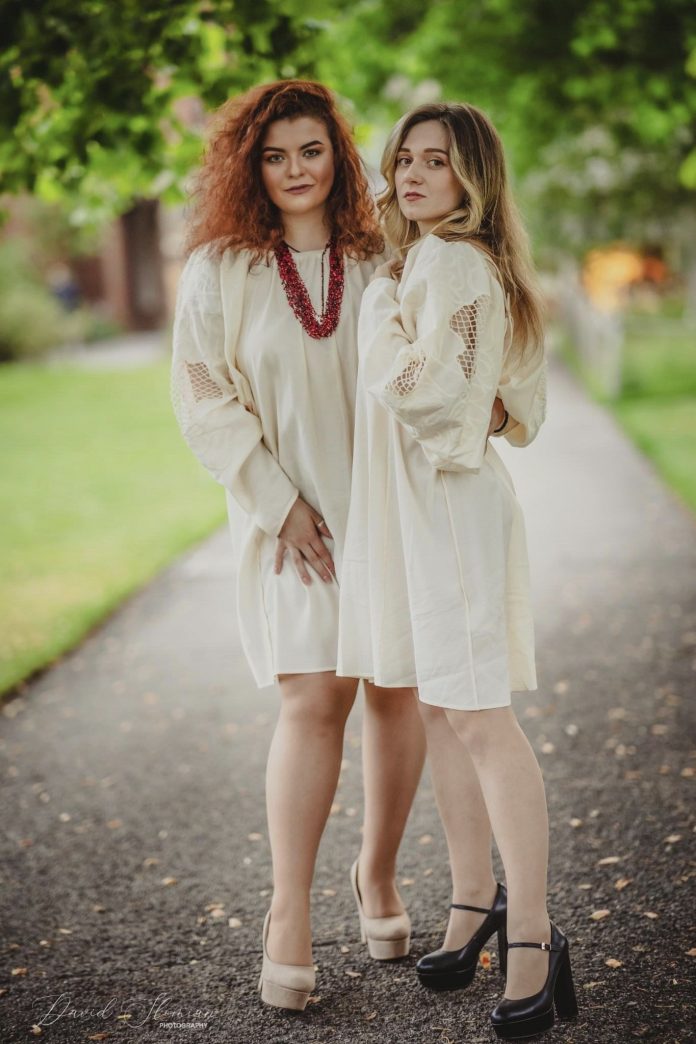 Julia Kogut-Kalynyuk and Kateryna Trachuk escaped the shelling of Lviv with only their banduras on their backs and their concert outfits in hand. The two women are warriors of “the Cultural Front,” fighting for Ukraine’s freedom through performance of traditional folk songs. The bandura is a sixty-five-string instrument unique to Ukraine dating back to the sixteenth century. Julia and Kateryna’s music not only conveys their people’s distinct and vibrant culture but demands the world’s attention remain on Ukrainians’ ongoing struggle against Russian aggression.

Julia (27 years old from Pustomyty) and Kateryna (25 years old from Chernivtsi) met at the Lviv National Music Academy, Ukraine’s leading music conservatory, where they both studied vocal arts and the bandura. Since their graduation, the duo has shared their music with audiences across Europe and North America. When the Russians bombarded their city, the women crossed the border from Ukraine into Poland on foot. They left their home and loved ones to continue the fight abroad with their instruments. Julia’s husband, a teacher of English, remained in Ukraine where he teaches English in online school lessons that continue despite the ongoing war.

Upon arriving in the United Kingdom, Julia and Kateryna befriended Iryna Ganzha, a Ukrainian immigrant who has lived in London since 2005. By gathering British audiences around traditional folk song concerts across the country, the women extend the reach of the bandura’s rallying cry. Iryna translated for Julia and Kateryna during our conversation.

SR: What does the bandura’s musical language convey about the Ukrainian identity that words cannot?

Iryna: The bandura’s sound [deepens the resonance] of our emotion. Ukrainians share how we feel through song, and the bandura is like having a hug around our feelings – it expresses the entire range of what we feel through music. The instrument extends multiple musical registers and, thus, serves not only as a great accompanying instrument for vocals but also represents our full emotional range. Beyond that, the bandura is the Ukrainian people. The possibilities of its songs are limitless.

The bandura has a fascinating history. In the late nineteenth century, during Imperial Russia’s persecution of Kobzars (itinerant Ukrainian bards who sang to their own accompaniment), the instrument was banned as though its music itself was a subversive language. During the Russian Civil War, the Bolsheviks murdered bandurists who promoted Ukrainian independence. I wonder if you could speak to what about the bandura makes its music so transgressive.

Iryna: It is important to remember that the first bandurists had their eyes gouged out by the Russians [for expressing their views through song], and the bandurists still found a way to perform. For Ukrainians, everyone who plays the bandura represents our fight against any invasion of the country. Whether it be the Turks or the Russians, but especially the Russians. The bandurists told the story of what was happening to people at their time. Their songs represent resistance, the fight for our homeland, and our home freedom.

How do you select the songs that you perform?

Julia: We play Ukrainian traditional folk songs [with a modern twist] and contemporary songs by Ukrainian composers in our own arrangement. It is an honor for us to share our love for traditional Ukrainian music with the UK audience while supporting our people at home. Half of the proceeds from our concerts go to foundations that provide aid to the Ukraine: Come Back Alive Foundation, Serhiy Prytula Foundation, and Help Ukraine Center (https://helpukraine.center/?fbclid=IwAR2-jW-EfzPOEKBmWz53EkO_fsVXgCYwqoI73ZQyI4tpgm1ARHXRPBL_jJU). So far, we have raised over three thousand pounds across our concerts. [These funds provide] ammunition and protective gear for the military, among other essential materials.

Iryna: I would like to also add that right now, we are not singing because we are happy. We are singing because this is one of the things you can do when you are distant from the battlefield. Music is a grenade we shoot at Russians that they can’t stop.

What brought you to Oxford?

Iryna: I believe fate brought these two incredible talents to the cultural center of our country, Oxford. I know people who are fighting at the battlefield now and every time they hear that these women perform in the UK, it makes their day.

At home your music helps Ukrainians persevere against the Russian invasion. In Oxford, audiences delight in its unique rhythms and harmonies as a source of entertainment. How does the audience and setting of a performance impact the way you play your instruments?

Kateryna: As Ukrainians, we already know the words and the music. But when we perform in this country, people here in England, without even realizing what the words mean, are often more overwhelmed [by emotion] than the people for whom we perform at home.

Julia: When you connect with the audience on this deeper level, it gives your music new life on stage. We even perform better.

Iryna: Everywhere in the UK that these bandurists sing, people have been touched even when they don’t know the words of the songs. They leave the concerts crying because the music communicates emotions stronger than words. Now, can you imagine if they actually knew the words?

The Ukrainian people continue to inspire the world with their courage in the face of evil. In what way does music fortify their spirit?

Iryna: It is our ammunition. We are singing, that means we have not surrendered. This is how we fight back.

Julia: When we sing here in the UK, we remind people that the war is not over yet. And not just a war, but a genocide and terrorism of our people. People cannot forget about us. We must scream about it. And loud.

Kateryna: We are the cultural front.

As we sit down today, Moscow announces its victory in Luhansk. Russia is now in control of large parts of the Donbas region. What does this mean for people at home?

Julia: Our hearts are broken for every person living in this territory. It’s hard to read the news and see the horror that the Russians [inflict] on our people and country.

Iryna: The Ukrainian military had to step down in Luhansk to save our people. That’s how our military works. They will not lose people. On the other hand, where my close friend is stationed, near Izium, the military actually led a counterattack and advanced. [We are actively preventing] the Russian military from taking over the entire Ukraine. There was a lot in Ukrainian media about our retreat from Luhansk, but we are advancing in other regions. No one wants to repeat Mariupol. Our army is about saving our people. But we will be back. No doubt. And going forward, we will retake Crimea. It is not just my wish. I know Crimea will be back to Batkivshchýna, back to its Motherland. Crimea is coming home, too.

Where will you literally and figuratively be taking your music in the coming months?

Julia: Our repertoire is always changing. We want to learn some English songs. We recently performed Ave Maria and Hallelujah. We play jazz and classical music, as well. With bandura, exploring different types of music always takes on new and exciting sounds.

Iryna: Until the war is over, these wonderful young women are going to be singing. Every concert tells our audience that the war is unfortunately still going on.

What can people in the UK do to support the Ukrainian war effort?

Iryna: Come to the concerts! Keep talking about what is going on. I haven’t used Facebook for two years, but now I post every day to remind all my international friends that the war is ongoing. And this war is not just about Ukraine – it’s about us being Ukrainians. I know we will win. This war is also about Europe and the rest of the world. We must win because we must not allow the evil of Putin’s Russia to win. Every time Julia and Kateryna perform, every post we make on social media, it is all about not letting the evil of Putin’s genocide against Ukrainians win. A bandura has sixty-five-strings, and it sings the song of our resistance. Whether it is to one friend or sixty-five, we all must sound like a bandura.

On July 7, Julia and Kateryna will perform at Wadham College’s Hollywell Music Room. Tickets can be found here: https://www.tickettailor.com/events/dvidoliband/705691?fbclid=IwAR0-0k7Ybk2mBpN2SLQL9z3YYUHHTU70irky_5Yo-LZE5UsEg3R2Io1hHPk.