A guide to Oxford’s libraries 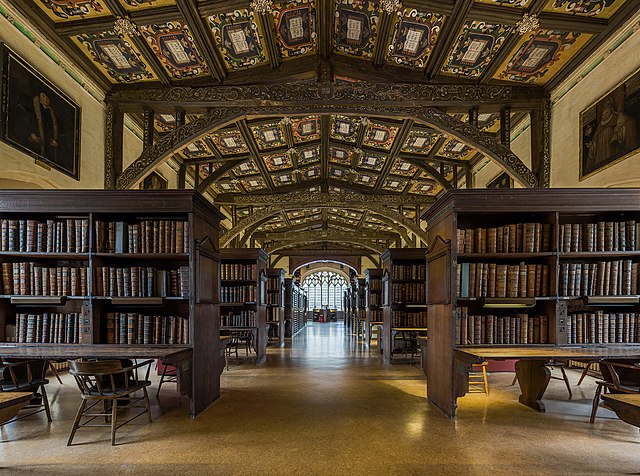 Once the whirlwind of Freshers’ passes, a week of meeting new people, settling in, and, of course, clubbing, you will probably want (or rather, need) to hit the library and tackle your first Oxford essay or problem sheet. Oxford is home to a whole host of libraries, some of which make indisputably scenic study spots, whilst others, though perhaps lacking on the visual front, make up for it by being practical and convenient places to get a substantial amount of work done. This is a selection of some of Oxford’s many libraries.

The Radcliffe Camera (A.K.A the RadCam)

One of the University’s most famous libraries, situated in the very heart of the city, you will have likely seen a photo of the RadCam on Google Images or a university prospectus before arriving at Oxford. The imposing dome, 18th-century stonework, and grand interior make the RadCam a popular spot for students seeking to live out their dark academia dreams. Some students apparently come to the RadCam to sit and admire the architecture, neglecting to do any work at all. Others prefer to avoid the RadCam entirely, claiming it is “intimidating”, or that the echoing created by its acoustics (perhaps better suited for a music hall than for a library) can make it difficult to concentrate. However, are you really an Oxford student if you haven’t studied in the RadCam at least once? Although it may appear daunting to venture into at first, pay it a visit, and decide what you think about this divisive library.

The Old Bodleian Library (A.K.A the Bod)

The Bod is one of the oldest libraries in Europe, and the second-largest library in Britain after the British Library, so it goes without saying that it is an unmissable study spot to make use of during your time at Oxford. With multiple floors, plenty of seats, and a view of its gorgeous courtyard and Radcliffe Square, the Bod is a favourite for many, myself included. While you’re at the Bod, make sure to check out the Duke Humphrey’s Library, located on the first floor. As the oldest and most beautiful reading room in the Bod, the Duke Humphrey’s is a real treasure (and, if you’re a Harry Potter fan, it formed the set of the Hogwarts library). On the whole, the Bod is a trusty library that has stylishly accompanied me through many a study session.

The Taylor Institution Library (A.K.A the Taylorian)

Notoriously difficult to find a seat in unless you arrive early in the morning, the Taylorian is a gem of a library, smaller than the RadCam or the Bod. Located on beautiful St Giles’, right next to the Ashmolean Museum, the Taylorian contains books related to the study of languages. Like the RadCam, the Taylorian is known for its ability to facilitate “aesthetic” study sessions through its beautiful interior, with wood-panelled bookcases rising to the ceiling, chandeliers, paintings on the walls, and carpeted floors. Somewhat resembling a Jane Austen-esque mansion, the Taylorian is certainly a library worth frequenting, if you are lucky enough to turn up when seats are available.

The Sackler library (A.K.A the Classics library)

As a Classics student, I, unfortunately perhaps, often find myself needing to go to the Sackler library. The Sackler is not known for being pretty; in fact, quite the opposite. The low ceilings, blank walls and subdued colours give it a slightly sullen feel.  Aside from this, the Sackler’s disorientating circular design has led me on embarrassingly numerous occasions to walk thrice in a loop as I tried to locate the toilets. However, due to its proximity to my college, and its functionality as the Classics library, I owe to it many a productive study session. It is also worth mentioning that, as the Sackler is less popular than the RadCam or Taylorian, one can always find a space to work, which makes it unquestionably a reliable library.

Your college library (A.K.A your forever friend)

When one inevitably runs into an essay crisis which needs to be resolved late at night, the college library is one’s immediate refuge. Unlike the aforementioned university-wide libraries, most college libraries operate 24/7, and will likely become the place second only to your own room which will see you at your most dishevelled. Become familiar with your college library – decide which nook you work best in, and figure out how to borrow books and use other resources like the printing system. In all likelihood, you will be spending a significant amount of term time here, so you might as well befriend it and reap the benefits.

The college library is fantastic for a number of reasons. It is enviably close to your accommodation (and bed); the wide array of books it has available will often mean that you won’t even need to leave college to acquire your reading for the week; it is full of the friendly faces of the people from your college. Be wary, however, that the chances of seeing – and being distracted – by friends whilst in the college library reach an all-time high.

Chances of being distracted: 5/5

I do recommend spending some of the first term getting to know the various libraries in Oxford, and finding out which you most like working in. Part of the excitement of going to uni here is being able to access some truly beautiful study spaces, so do make the most of it!