“In here, it’s just pretending…”: ‘Posh’ and the brilliance of impersonation. 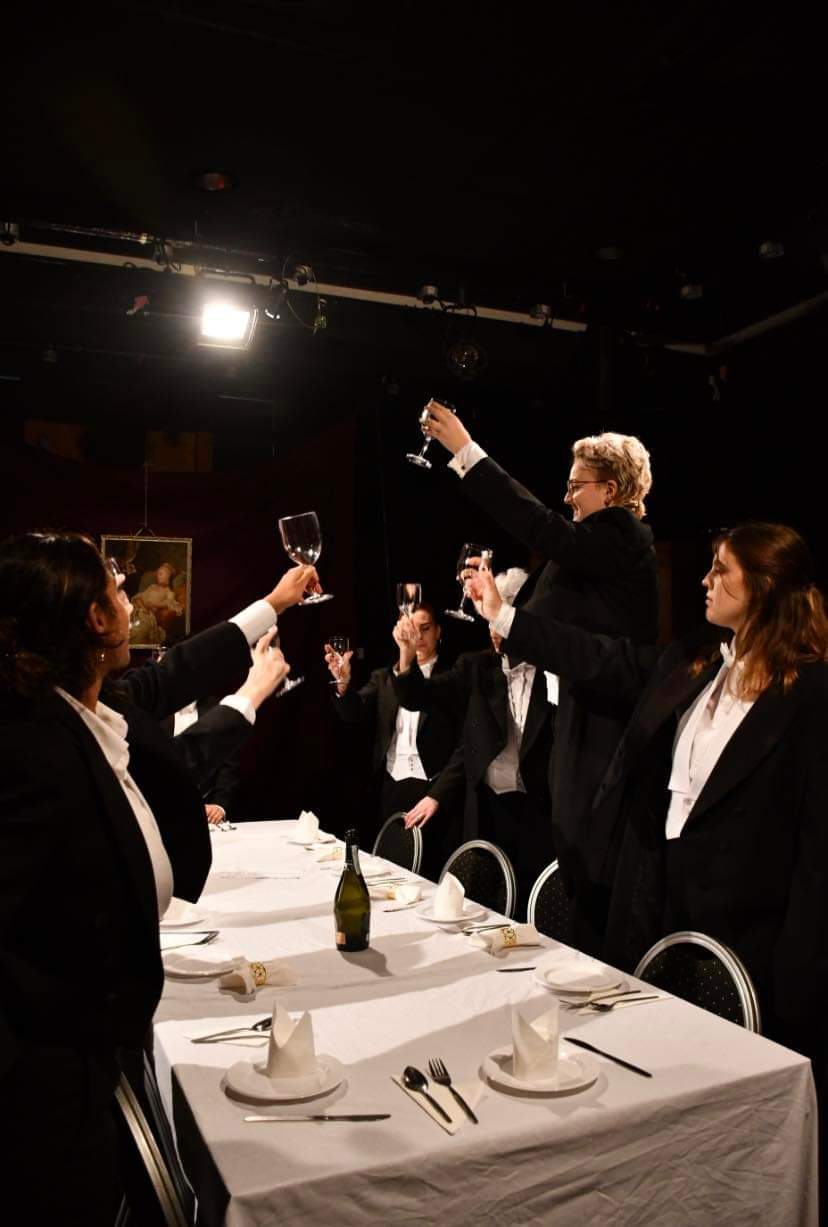 According to its marketing, An Exciting New Productions’ Posh promises to “bring ‘Oxford’, to Oxford”. A staging of the elusive, super-elite leagues of Oxford University, as seen in Posh’s ‘Riot Club’, is certainly relevant given the direct links between current UK Cabinets and the real-life Bullingdon Club on which the play is based.

Laura Wade’s play Posh debuted a month before the 2010 General Election, from which Cameron and Clegg emerged as an infamous coalition. Twelve years later, wobbly Tory leadership is hardly unfamiliar to the audiences of An Exciting New’s November production at the Pilch. In the wake of Rishi Sunak’s Prime Ministerial ascension, without a General Election since 2019, concerns over who has power, and what they get away with, resonate more than ever. While it is no novelty to be confronted with the lack of accountability from those in power, enabled by enormous wealth and privilege, Brook and Trim’s production is a refreshing take.

Harry Brook’s set design imitates the dining room, impressively elaborate compared to the typically minimalist sets one might expect of a black box studio like the Pilch. The dining table takes a central position in the small space, with seats about a metre behind the table, an ingenious echo that places the audience peering over the shoulders of the dinner guests. The chairs we sit on are the same Pilch-property ones that the rioters use. Further, the lighting, designed and operated by Orli Wilkins, beams not only over the supposedly riotous action but also casts an illuminating light on the audience. Like the characters, we are inescapably aware of each other, bar monologues accompanied by spotlight. But we are, of course, unwelcome guests at the Riot Club table.

Working with the stark lighting, the cast do an excellent job at making us feel uncomfortable. Magnificently unpleasant performances must be credited to Maizie Lambert (Harry), Arya Nagwani (George), and newcomer Susannah Wiedman (Miles). Katie Peachey as Dmitri had a stunning stage presence, as did Frankie Kuczynska as Toby, particularly in one startlingly rousing monologue in which she stomped across the table. The tension between Dmitri and Guy (Hope Kelly) is energetic and uncomfortable, a credit to the actors. Flashes of what we might interpret as a conscience in vaguely more sensitive characters provided contrast to the over-the-top chauvinism, for example those of Leah Aspden (Hugo), Sarah Hussan (James) and Imogan Boxall (Ed).

The production’s majority non-cis-male cast perform an entitled yet underlyingly anxious masculinity, as they stride, chests-first, around the small performance-space. Ailish Gaughan’s costume design straddles an interesting boundary, as beautifully fitted full tailcoats and suits were paired with the entire cast’s infuriatingly good hair. It was refreshing to see that no attempts were made to re-figure the gender presentation of the cast – long ponytails and glittering earrings swinging. It placed the emphasis instead on a self-aware contrivance of characters and types; these actors are performing a brand of chauvinistic masculinity, just as much as the characters they depict. This resounds well with the script’s emphasis on rehearsing tradition, imitating the past:

Boozy political scorn veers from euphemism to explicit – “I fucking hate poor people” – slurs Alistair, brilliantly performed by Bronte Shelbourne. Emphasising this growing explicitness, credit must be given to the show’s prop design, placing more and more wine bottles on the table as the play unfolds and the characters develop (or rather, degenerate).

The much-anticipated trashing scene is of course a challenge to stage. Co-Producer / Co-Director duo Harry Brook and Ice Trim re-imagine the scene as a slow-moed, extravagant dance that comes to an abrupt halt at its climax. Brook’s classical soundscape, with advice from Cameron Hutchinson, supports the scene’s imitative quality, as the cast clamber onto the table, physically sparring over an armchair-turned-throne. Trim and Brook’s choreography sends the cast briefly, wonderfully, into a thundering and parodic ballet.

Whether or not intentionally, the set was destroyed by the play’s action. The night I saw it, one of the tapestries surrounding the stage-space was pulled down before the actual ‘trashing’ moment, an apt foregrounding of what was to come, as the cast wreak what feels like real damage, tearing at the set itself. We were reminded of our presence in the Pilch, as the props table, bearing handwritten notes and Sainsbury’s bags, was boldly revealed. It was incredible to see the fourth wall torn down by the club’s riotous energy, and whether this was a stroke of directorial genius or a fantastic accident, it felt like a metaphor for the wider social implications of the act.

Significantly, while much of the play centres on the inner workings of the Club, the confrontations between the rioters and outsiders were handled by incredibly hard-hitting, sympathetic, deft performances from Molly Jones, Jo Rich and Emma Pollock.

At the end of it all, the audience are left in the wake of their destruction, while tellingly, most of the boys have left the scene, unscathed.

An Exciting New Production’s Posh is brilliant student theatre, the key strength of which is its own quality of artifice. It lets itself be dismantled both conceptually and physically, to prove and highlight the destructive performances of those in power.