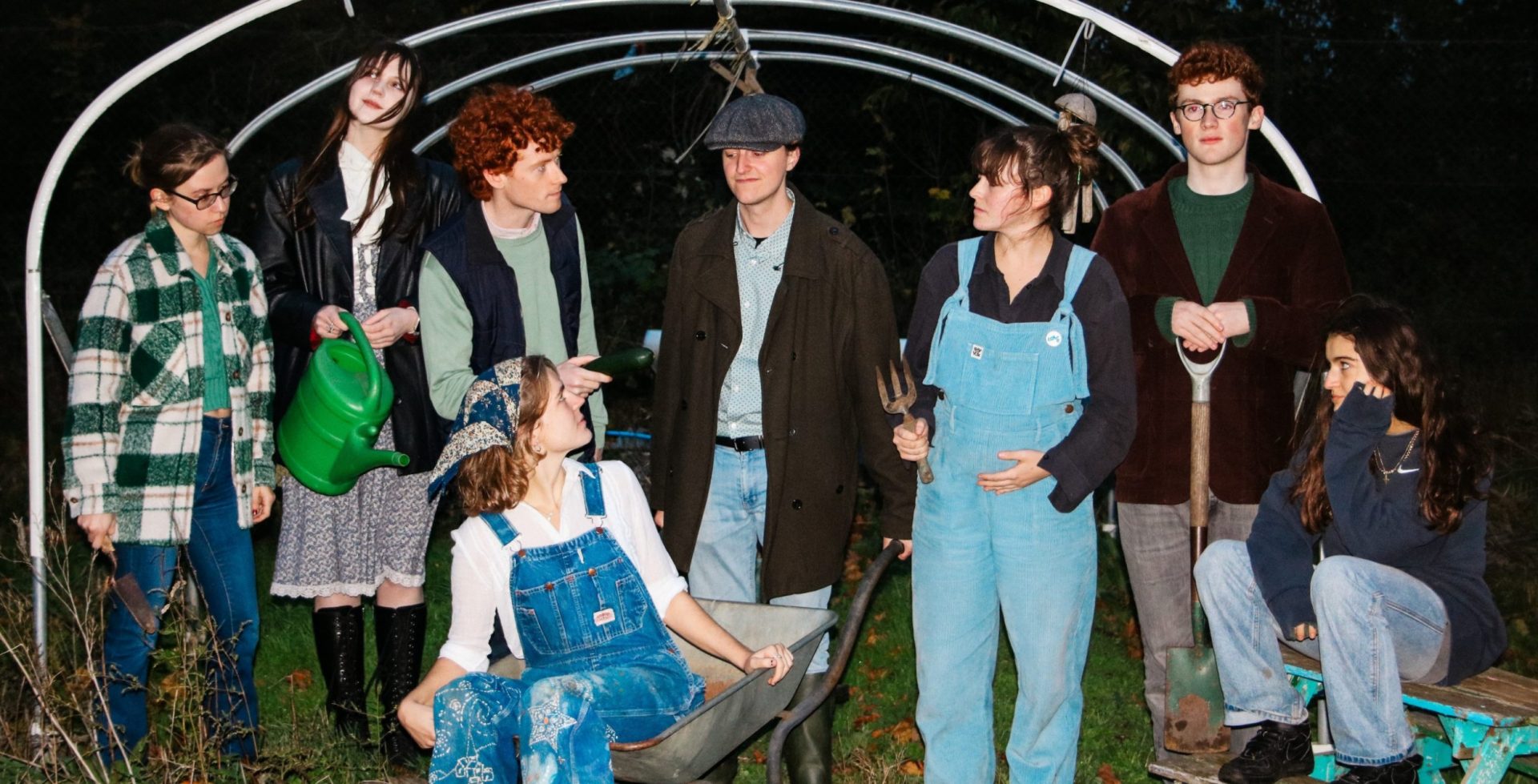 Following their debut production last term, a gripping rendition of Jez Butterworth’s Mojo, Nocturne Productions have come back with as much flair as ever with their new dark comedy thriller Fêtid, written and directed by Max Morgan and performed at the Michael Pilch Studio in 6th week. Serving up a delicious concoction of dysfunctional families, dark humour and exquisite, home-grown courgettes, Fêtid takes us into a world where vegetables are perversely valued above human relationships as the residents of a village get ready for their annual fête.

The opening of the play, when the characters quietly tend to their respective allotments accompanied by a gentle guitar serenade from Faye James, affords an idyllic image of pastoral life in a countryside town. This is very much the calm before the storm; we quickly discover from the first few scenes of the play that this rural simplicity and the residents’ initially endearing concern for their allotments actually hides a more disturbing reality, wherein relationships are deteriorating, tensions run high, and most of the town is unhappily decaying like an uprooted vegetable.

Will Wilson’s set appropriately transformed the Pilch into an allotment, complete with a green turf laid across the floor, and a wooden shed at the back of the stage, with mellow lighting contributing to the ostensibly peaceful mood of the town. In the second part of the play, an aged scarecrow of sentimental value to the townsfolk is placed inside the shed, peering eerily out at the audience as though to say that the town’s golden days are long gone.

The 8-piece cast is stellar in their portrayal of their characters, and the interactions between them, rife with bubbling tension, are compelling to watch. Lily Carson as Sue and Juliette Imbert as Polly both aptly and energetically portray women who are not afraid of confrontation, stressed in equal measure by the organisation of the upcoming fête, and by the upheaval in their family lives.

Tom Pavey delivers a natural performance as Jim, Polly’s ex-husband, skilfully making the audience doubt his intentions towards his partner Yvette (Edie Critchley). Likewise, Critchley is apt in her depiction of the anxiety of the ‘other woman’, as her attempts to keep herself steady disintegrate into feverish doubt.

A highlight of the play was the warmer, more intimate conversation between Anna (Avania Costello) and Chris (Milly Deere) about Chris’ parents, Jim and Polly, and their youth, which provided a welcome exchange of real tenderness and understanding amidst the turmoil of the other relationships. Costello as Anna provides an element of maternal compassion towards Chris, soft-spoken in her delivery and gentle in her demeanour. Deere expertly handles the role of the angsty teen, playing by turns an insolent daughter and a girl who is genuinely affected by the continuous strife between her parents, managing to keep the audience sympathetic towards her.

Reverend Leaky, played by Samuel King, is particularly entertaining, functioning as a figure of comic relief throughout the play with his unhelpful mediatory interjections. Indeed, the smattering of jokes within the dialogue makes the play watchable and entirely engaging; it steers itself with ease away from the trap of becoming too bleak, maintaining a level of light-heartedness alongside the handling of more serious themes.

Cormac Diamond’s performance as Mark is a paradigm of this balance. He convincingly moves between enthralled fascination with his vegetable patch to inebriated clumsiness and rage; the audience is both amused and repulsed as he drunkenly utters sweet nothings to his “hand-cultivated” courgettes. Mark’s fondness for his vegetables is uncomfortably sensual, whilst he is noticeably less attentive towards his wife Sue, who laments that Mark’s “entire world orbits around the f*cking cucumbers.”

Whilst the play’s most violent moment, Polly’s attack on Jim, is effectively climactic, it felt slightly rushed; a longer build-up to this act of violence would have been more fitting, to better develop Polly’s motivations and thought process in the seconds before she strikes. Nonetheless, the repercussions of Polly’s act are palpable and poignant, causing Jim’s memory loss and serving as the catalyst for Chris’ permanent departure from the town.

With Yvette having left as well, it appears that relationships, between partners, parents and children, have disintegrated beyond repair – except for Jim and Polly, who, in a twisted way, seem to have grown closer, with Jim blissfully unaware of Polly’s attack on him. The explosion of the shed – scarecrow and all – in a haze of simmering red light is an effective symbol of the destructive instability of the townsfolk’s relationships with one another.

The play’s ending leaves us wanting to know what is to become of the residents of this town. One thing is for sure – their vegetables will continue to be well-tended, no matter how neglected their personal lives may be. The play’s final line, Jim’s suggestion to Polly that “we could replant this [onion], I reckon” brings home the idea of the villagers’ misplaced priorities; in the face of their unravelling lives, they can only hope to desperately keep control over the one thing they can – their vegetables. Morgan’s multi-faceted script offers a combination of dark comedy and depth which keeps the audience consistently intrigued. The interactions between characters are handled sensitively and perceptively, and the actors bring this script the nuance and energy it deserves, making Fêtid a thrilling look into disjunctive relationships and the impact they have on those affected.