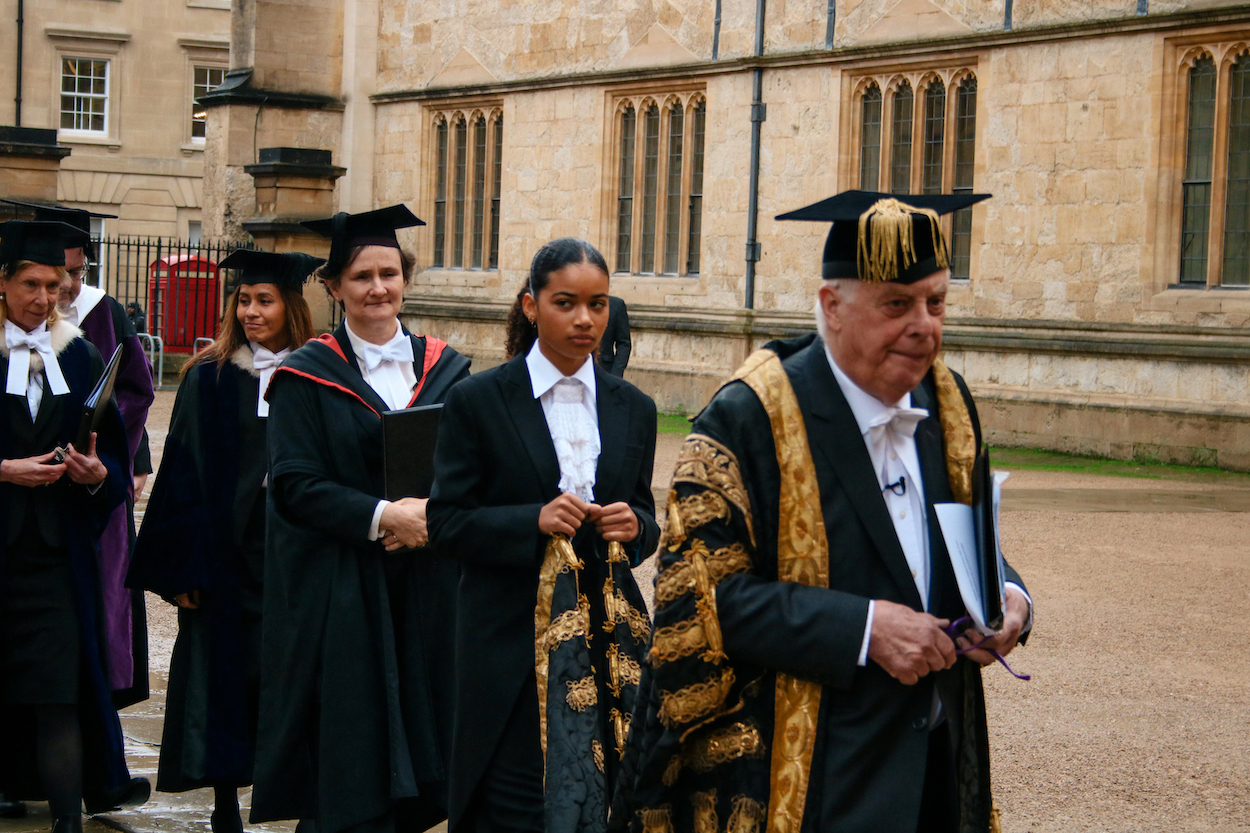 Oxford’s Chancellor, Lord Patten, welcomed the new Vice-Chancellor, Professor Irene Tracey, in traditional Oxonian fashion with a speech given on Tuesday morning. Opening with a summary of Tracey’s impressive academic CV, Patten went on to address academic stakes in the state of the national economy, the ongoing Christ Church College scandal, access and outreach at Oxford, and his belief in academic freedom of speech.

Patten spoke of the “poor lamentable state” of the national economy and the threat it poses for continuing university research. He said that government promises of funding for further education are insufficient and challenged the government’s “likely” prioritisation of post-16 vocational education. Patten’s vision for Britain’s next “skilled workforce” is premised on a university education, so Oxford must “continue broadening access to able students from disadvantaged backgrounds” as well as “early- and mid-career students”.

The Chancellor also commented frankly on Oxford infighting. Most recently, Christ Church’s mismanagement of £6.6m attracted a warning from the Charity Commission. Patten hopes the warning will be listened to but made it clear that internal college affairs were a “matter for the colleges themselves”. He also addressed financial disparities between colleges that yield “unequal student experience”. Collegiate differences, big or small, fair or not, however, do not lie within the bounds of Patten’s responsibility but instead with the Conference of Colleges, as the Chancellor took care to point out. He labelled “unequal student experience” as “partly a result of history and luck”.

This “history” was then unpicked by the Chancellor who gave his view on the purpose of an Oxford education. Patten has a productive desire to turn the University’s reputation away from the elitist “Freemasonry of the clever”, as he called it, and towards developing a “wide, diverse academic community”. The wider reputation of Oxford, however, remains in the hands of those who have gone on to national leadership roles and while Patten says it is not “something of which we should be ashamed”, the current government, whose frontbench is rather exclusively 45% Oxbridge-made, has yet to prove the reputation wrong.

Patten proceeded with his most extensive section which was on the importance of “liberal values” as a guard against being “colonised by a modish political correctness”. For Patten, protecting freedom of speech is the key to avoiding governmental interference in academic, intellectual endeavours. By his ethos, making a university a “safe space, intellectually”, such as the flippantly-referenced campaign to decolonise maths, is to give in to being minions of the government. Though, after twenty years as Chancellor, some would argue that Patten’s own seat in the university has become too much of a “safe space”. After all, as Patten quoted from di Lampedusa’s ‘The Leopard’, “things have to change in order to remain the same.”

Nevertheless, the speech ended with warmth, wishing Professor Irene Tracey the best for her time to come as Vice-Chancellor. It will be interesting to see how closely aligned Patten’s vision is with Tracey’s as she begins her tenure.