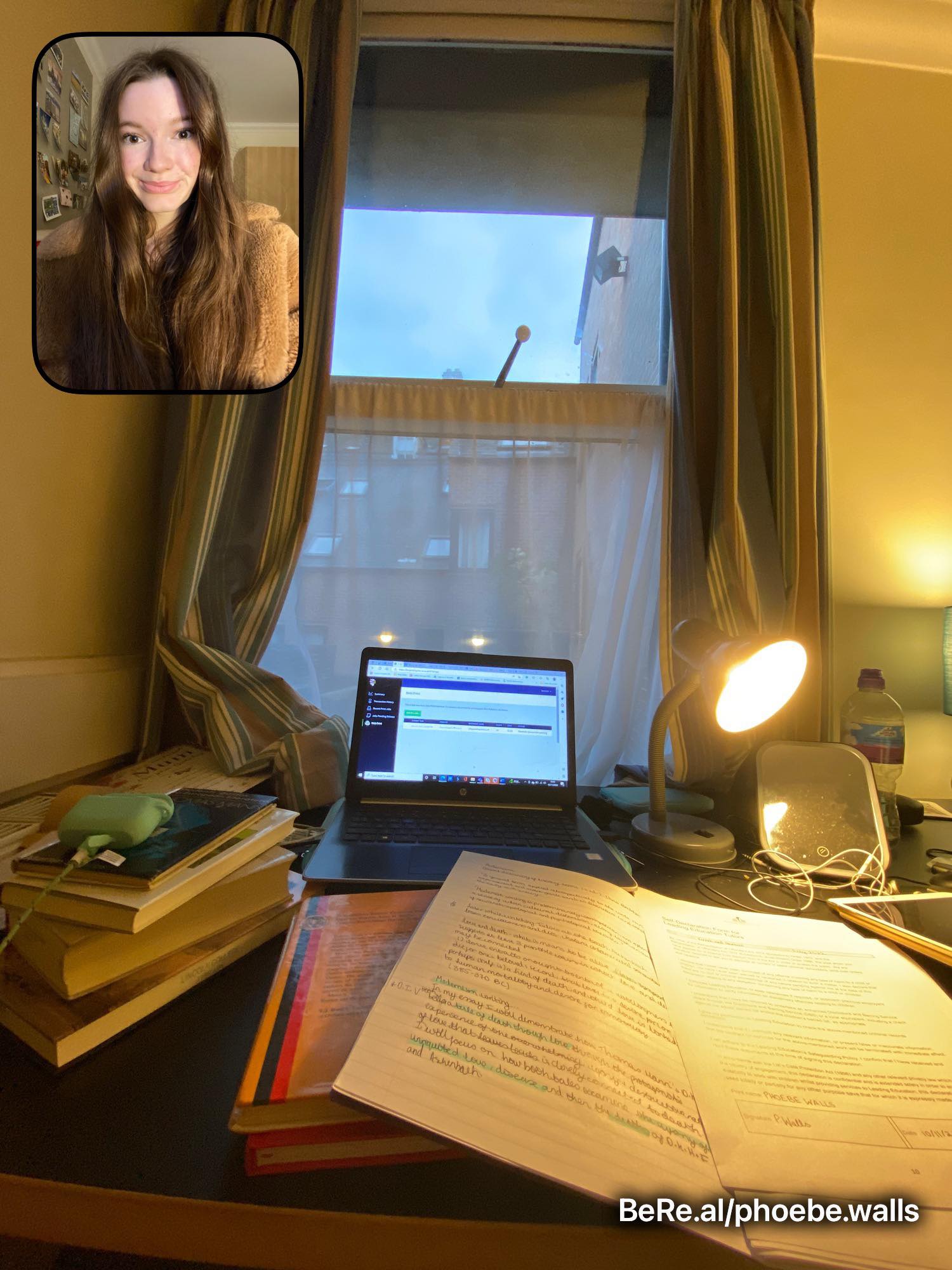 Phoebe Walls discusses how even the realest social media yet is subject to “late” realness.

Once a day phones across the world ping with the famous notification: ‘Time to BeReal – 2 mins left to capture a BeReal and see what your friends are up to’. BeReal provides spontaneous, unfiltered glimpses into friends’ lives, be it messy bedrooms or thousands of open tabs. Instagram offers the highlights but on BeReal, it’s acceptable to be out of focus and still in pyjamas at 2pm. The question stands: is this call for realness a burden or a blessing?

BeReal is an ideal way to keep in touch. Rather than liking someone’s glamorous Instagram, you see them everyday at a random time. Most importantly, it feels real; no filters or time spent choosing the perfect curation of life’s highs. The opportunity to flick through the calendar and see exactly what you were doing one day two months ago is also strangely satisfying. Not to mention the end-of-year replay: a short video created by the app that allows users to watch the year flash before their eyes. BeReal captures the magic in the mundane.

However, not everyone is being real. Despite the obvious yellow warning sign emojis, the pressure of the 2-minute timer is an idle threat. An increasing number of people post after the chosen time, sometimes as many as 20 hours late, at which point my phone is bombarded with notifications of a ‘late’ post. When it gets to that stage,  I wonder what the point is. Surelythen the app becomes just like any other social media platform. In a society where our identities are often defined by our online presence, the burden of being constantly available can make young people fear that they are boring. I admit I’ve sometimes wanted to wait until my makeup is fully blended, or I’ve worried about still being in a dressing gown at 11am after the timer has gone off. I’d rather post when I’m with my friends than when I’m sitting at my desk. It can also be frustrating when  I wake up to the notification with my eyes still clamped shut like a badger to then see someone else has waited twelve hours to boast their thrilling night out.

Sometimes the ‘realness’ also creates unnecessary pressure. My feed is full of Oxford students studying at all hours of the day, which makes me feel guilty for relaxing during the vacation. Even on Christmas day, I was tormented by pictures of tutorial sheets and collections revision.

BeReal offers a sense of casual posting for people who prefer to maintain a sense of mystery to their online life. Those with one Instagram post to their name enjoy the lack of pressure on a photo that forms an archive only the user can see. It’s impossible to  stalk a BeReal account and stumble upon a tagged photograph of someone when they were 13 years old. Posts disappear and instead form personal, private calendars. Nevertheless, my Nana was frightened of the app and ran out of the room before the timer got a chance to capture her realness…

It seems that the ticking time bomb of the BeReal notification is just another excuse to stay glued to our phones. Although less fake than the photo ‘dumps’ found on Instagram (a deliberate selection of photos), BeReal still offers its users the chance to post late and becomes like the forms of social media it has tried to estrange itself from. If we’re being truly real, this is just another online version of ourselves. Perhaps we should aim to spend more time in the real world, having fun with friends and doing things we love, rather than relying on social media to permit ‘realness’. Realness is all around us, we just have to let it in.