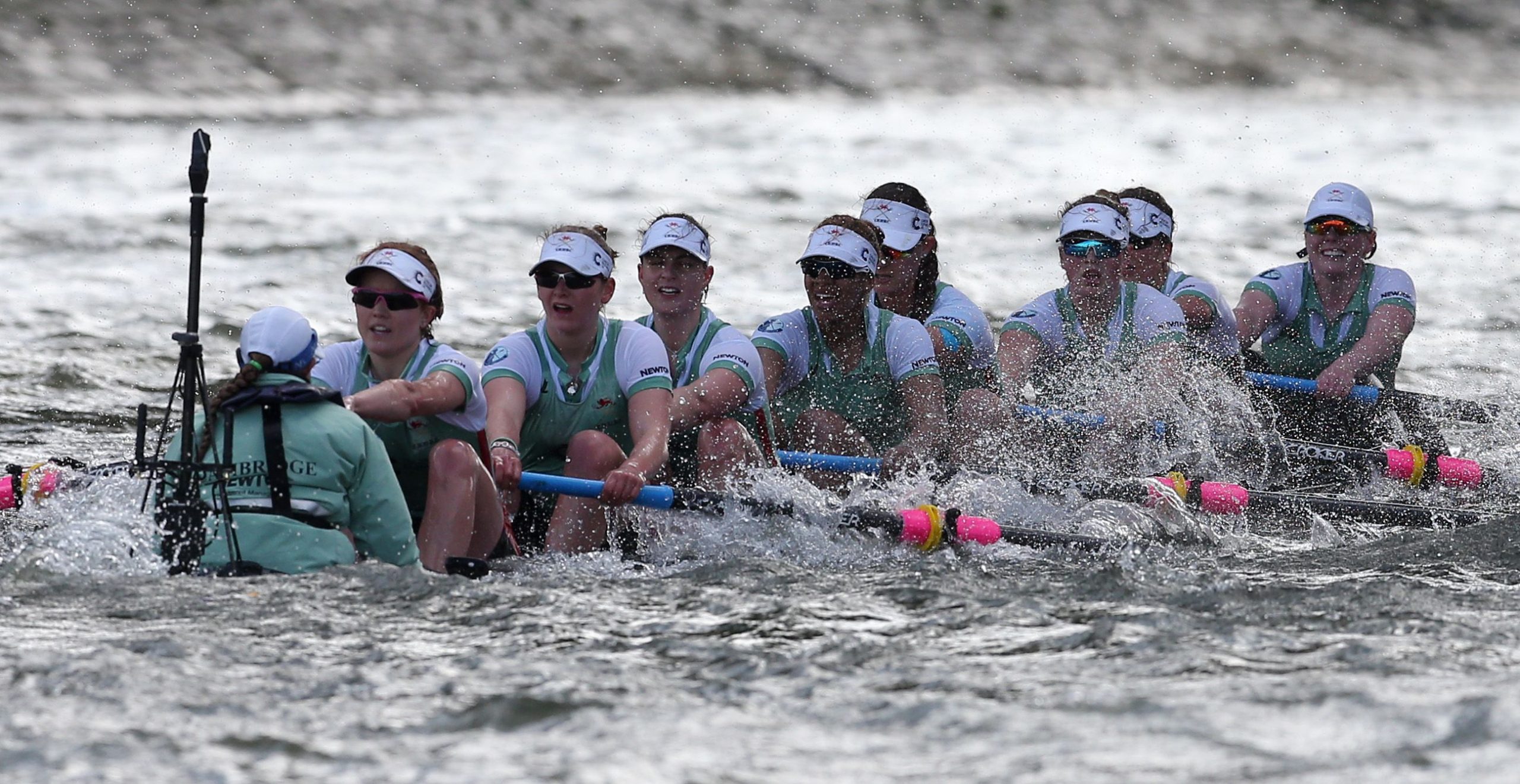 5:10 That’s it from us today. Thank you for tuning in; we hope you enjoyed our coverage. It’s been a bittersweet day for the dark blues, with a disappointing loss for the men but a fantastic victory for the women. Cambridge, we’ll see you again next year.

4:40 The BBC asks Morgan Gerlak, the Oxford men’s captain, “Is this the end of an era?”

4:38 Who exactly does Stan Louloudis think he is? Outrageous stuff from the former OUBC President.

4:25 Cambridge’s cox looks behind him to see Oxford pushing hard about two lengths behind them. One kilometre to go.

@theboatraces. Such great camera work and commentary. Awful conditions on the Thames making for an exciting encounter. Cambridge well ahead

4:21 Both crews fighting choppy waters, Cambridge still a length ahead.

4:18 Oxford putting pressure on the Tabs around the bend and looking more relaxed. How will these crews face up to the the bad conditions?

4:16 Both crews approach the mile post, Cambridge ahead but rowing at 34 strokes per minute, Oxford at 35.

4:05 Our man on the ground at the finish line is unimpressed by the BBC’s coverage, with many reportedly turning to the Cherwell live blog for Boat Race coverage.

Lots of people questioning why Seann Walsh is presenting the Boat Races for the BBC this afternoon. We’re not sure either.

3:59 The men’s reserve race, unlike the women’s, ends in favour of Oxford.

Isis look to have a margin of approximately 2 lengths, crossing the finish line as winners

Blondie have stuck at around 3 lengths clear – Osiris will look to step on in the last few minutes to reduce the deficit.

A crab in the Blondie boat sees a momentary stall, but not enough to reduce the deficit to Osiris. Blondie have a 3 length lead.

3:38 The reserve crews are still battling it out.

Cambridge struggled to keep their boat afloat during the #BoatRace2016 https://t.co/ijzV92GGXq

At the mile post, Osiris have a length’s lead.

3:28 Live on BBC, “There’s a good chance this Cambridge boat might not make it to the finish line.” Oxford’s decision to head for the bank pays off as they secure a solid lead.

3:26 Oxford securing their lead now, and moving into the bank away from the middle of the river, looking for shelter from the wind and rough waters.

Oxford have settled into the conditions now and seem the stronger crew, currently with an 8 second advantage

3:22 Oxford pull ahead for a moment, but the rough water proves too much for them to sustain the lead. Cambride still hanging on.

Now at the halfway point, Cambridge getting the worst of the water and Oxford nearly have open water advantage and increasing

3:18 Both crews dangerously close to one another for a moment there. Oxford now almost a whole length ahead.

3:16 Looking promising for Oxford going through the bend round Craven Cottage – half a length ahead.

Through the first minute the crews are level

2:49 Both the OUWBC Squad and CUBC reserve crews have now boated. Strong winds mean that Cambridge may have an advantage with heavier crews.

2:43 Lightning along the Thames

Watch the moment lightning hits the Thames ahead of the #BoatRace2016. #bbcboatraces https://t.co/oF3Qbs7nwy via @BBCSport

Thanks a lot to Thomas Fattorini for producing some beautiful medals for the winning crews! pic.twitter.com/mXytcb7Nix

2:42 Proof of how windy it is today. Let’s hope everything goes smoothly regardless of our typically bad weather!

Coverage of the Boat Race has just kicked off on BBC1. Cherwell’s viewing figures reportedly far higher than the BBC’s so far.

2:32 Just 45 minutes to go now until the start of the women’s boat race. Excitement building down at the finish line. Sky brightening up too.

2:28 The crew are preparing to push off.

The @OUWBCsquad Blue Boat are taking to the water pic.twitter.com/7PRX2RWpTL

2:22 Tune into BBCOne in 10 minutes for live coverage of The 2016 Cancer Research UK Boat Races

It’s very windy on the Tideway today and conditions are likely to prove tough for both crews. Cambridge, as the heavier crew in both the men’s and women’s blue boat races, should be in a better position to weather the wind and rain.

The men’s Blue Boat toss is underway. Cambridge win the toss and choose the Surrey side. pic.twitter.com/LuobjGPxTm

2:02 In other news, our Varsity Football match has reached half time point. Oxford are leading 1-0.

2:00 Thunder has been heard at the finish line!

1:34 Oxford win the toss and choose Surrey station. Cambridge will take Middlesex. This is looking to be advantage for Oxford round the first bend.

12:10 More than a quarter of a million people are expected to be present at the Oxford vs Cambridge annual boat race this afternoon along the River Thames. The race will begin at Putney Bridge travelling on to its midway point at Hammersmith, through Barnes and finishing at Chiswick Bridge.

11:50 Our Sport Editor, Aigerim Saudabayeva, has already taken up her spot by the Thames. Around 250,000 spectators are expected to watch the Boat Races today. Make sure you get down there early to secure a prime spot!