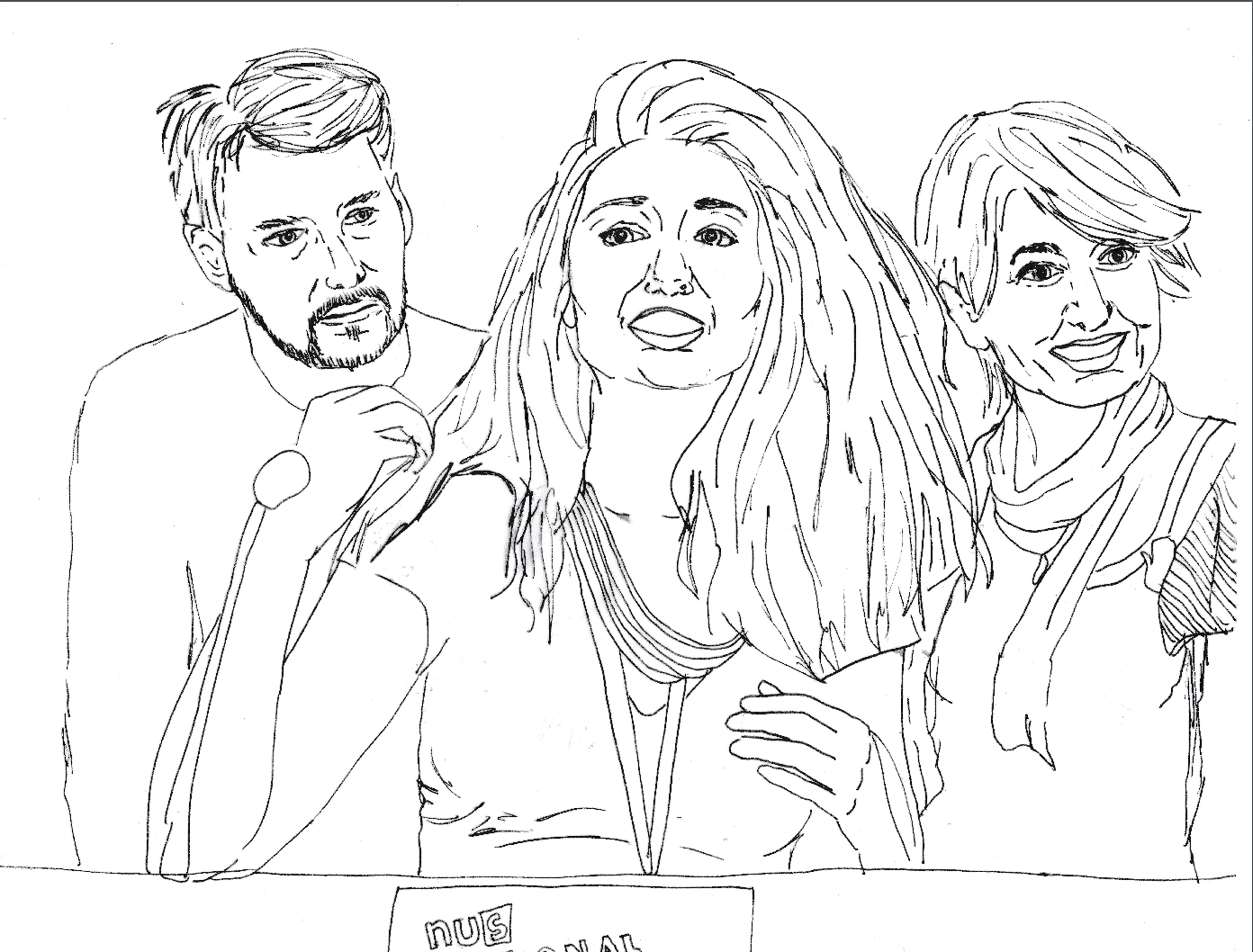 Speakers at the Oxford Radical Forum (ORF), including controversial NUS President Malia Bouattia, have been variously condemned for alleged anti-Semitic views, alleged sympathy with Hamas, and for mocking a disfigured British veteran, among other provocative positions.

Magdalen and Somerville JCRs had voted before the announcement of the lineup to give £200 and £150 respectively to fund speakers travel to the event and to publicise the Forum to common room members. OUSU Council voted to give £150 from their discretionary fund.

This morning debate erupted on the Magdalen JCR Facebook page in response to OUJS’s statement.

Jemma Silvert wrote: “ORF are not providing a forum for open and honest debate… In platforming three openly anti-Semitic speakers they are ensuring a systematically one-sided discussion, and not the open forum they had promised when requesting our funding.

“Whilst it is the prerogative of the left to criticise the actions of the Israeli government (in my personal opinion, rightly), this can be done… without any traces of anti-Semitism. If ORF wish to provide such a viewpoint in their debates they should be doing so without platforming speakers who have an unapologetic history of anti-Semitic and racist remarks.”

Another student commented: “However pro-free speech you are, and I am very, I don’t see any defense for *paying* to help these people.”

Magdalen is now set to hold an emergency JCR meeting this Sunday in order that a motion can be proposed in an attempt to withdraw the money they donated, which has already been given to ORF.

The Magdalen JCR executive team said in an email to JCR members: “This JCR in no way condones anti-Semitism or hate speech in any form and the committee are thus deeply perturbed by ORF’s announcement. We are dealing with this to the best of our ability.”

Somerville College JCR will also hold a meeting this Sunday, in which “the JCR’s donation to the ORF will be brought under review”, according to JCR President Alex Crichton-Miller.

Crichton-Miller also stated in an email to JCR members: “The passing of that JCR motion in no way sought to condone the alleged views of these speakers. We utterly condemn hate speech and attacks on identity in any form.

“The invited speakers was not a topic for debate in the meeting, and indeed the implicated parties had not (I am told) been confirmed as speakers at the time. The ORF is a left-leaning weekend forum that seeks to provide robust debate on issues that it feels are relevant.”

OUSU said in a statement: “OUSU weren’t aware of any such allegations against the motion but take them very seriously. We have previously condemned anti-Semitism and expressed our commitment to tackling it, which we reaffirm now. We are similarly opposed to any form of oppression and prejudice against marginalised groups.

“The OUSU Executive Committee has considered the matter, and believes that Cherwell’s investigation constitutes new information, and which may have affected the outcome of the motion had it come to light in the original discussion.”

OUSU now intend to hold a debate at council due to be held on the first of March, to which they invite “all interested parties (including the original proposers of the motion, and OUJS) to attend and debate the issues.”

The statement put out this morning by OUJC condemns three figures scheduled to speak in particular: “The Oxford University Jewish Society (OUJS) stands in opposition to the decision of the Oxford Radical Forum (ORF) 2017 to host Miriyam Aouragh, Malia Bouattia and George Ciccariello-Maher.”

OUJS state that: “Last year, Ciccariello-Maher suggested in a tweet that Israel harvests organs, and explicitly refers to the blood libel trope. This is the idea that Jews steal the blood and organs of non-Jews for religious rituals. It is not only false, but grossly offensive. It is steeped in a long history of blood libel claims and should put someone beyond the pale of student debate.

Ciccariello-Maher rejected the allegations, telling Cherwell: “The desperation of OUJS’s campaign against the ORF is truly absurd. In particular, I am accused of fostering a ‘blood libel’ narrative, when the totality of my comments on the matter have been limited to: one, defending my courageous colleague Jasbir Puar from a similar smear campaign, two, posting a 2009 article published in The Guardian on the subject, and three, responding to Israeli military comments regarding admitted past practices.

“The ludicrous nature of OSJS’s claims is most apparent when they suggest that I “explicitly refer to the blood libel trope,” without mentioning that I only “refer” to the trope in order to reject its use in smear campaigns like this one.

“The saddest part of such witch hunts is that we live in a moment of resurgent white supremacy – anti-Semitism very much included. We should be spending our energy fighting real racists and anti-Semites, not invented fantasies.”

Malia Bouattia was criticised last year following her description of Birmingham University as a  “Zionist outpost”. Following her election as NUS President, OUJS referred to her comments as “unambiguously and unashamedly anti-Semitic” and campaigned for Oxford to disaffiliate from the NUS.

An NUS spokesperson released the following statement in relation to allegations made against President Bouattia: “Malia has addressed the accusations of antisemitism numerous times since her election last year, including in the Sunday Times in April, the Huffington Post in October, and in writing to the 560 NUS-affiliated further and higher education students’ unions in December.

“The resuscitation of this story in the media is part of a sustained attack on a high-profile Muslim woman in a public position. Her family has been harassed and she is the subject of regular and serious threats. These attacks not only put her personal safety at risk but are part of a dangerous trend that deter under-represented groups from taking part in public life.”

OUJS said of Miriyam Aouragh: “In 2004 she organised a commemoration service for Ahmed Yassin, the founder of Hamas, a terrorist organisation whose charter issued in 1988 is overtly anti-Semitic, stating the need to kill Jews and referring to The Protocols of the Elders of Zion.”

In a statement made to Cherwell Miriyam denied the allegations: “Like many I was very angry about Israel’s murderous targeted killings campaign between 2000-2004, which saw hundreds of political activists and leaders assassinated when the popular uprising in 2000 broke out.

“These war crimes were condemned across the political spectrum, especially the ‘collateral damage’ caused by extrajudicial killings using F16s, such as collapsing buildings with families in them and the killing of bystanders when cars were blown up.

“One case was that of Ahmed Yassin of Hamas, an elderly man in a wheelchair living in a refugee camp in Gaza. I was part of a protest against the incredible violence of that period, many were making this argument, including the UN, the EU, as well as a large numbers of MPs in this country.”

The OUJS statement continues: “We believe that our community should not be inviting speakers who espouse anti-Semitism and hate speech. They should not be afforded a platform to spread their opinion. We understand that the ORF are “not committed to a unified political line”, however anti-Semitism in any form is not a political issue and should be condemned.

“In the OUSU council of February 1st, £150 of OUSU’s discretionary fund was assigned to the ORF and, in particular, to these speakers’ expenses. ORF have also received funding from a number of JCRs. We believe that our students’ union and JCRs should not be supporting this event and therefore demand that their funding for the Oxford Radical Forum 2017 be withdrawn.”

In light of Cherwell‘s investigation, OUSU has as made clear its intention to re-examine ORF funding: “The OUSU Executive Committee has considered the matter, and believes that the Cherwell’s investigation constitutes new information, and which may have affected the outcome of the motion had it come to light in the original discussion.

“As a result, and given that ORF doesn’t take place until 3rd-5th March, we have decided to refer this motion back to OUSU Council in 7th week Hilary Term (1st March). We encourage all interested parties (including the original proposers of the motion, and OUJS) to attend and debate the issues.”

The Oxford Radical Forum has been contacted for comment.