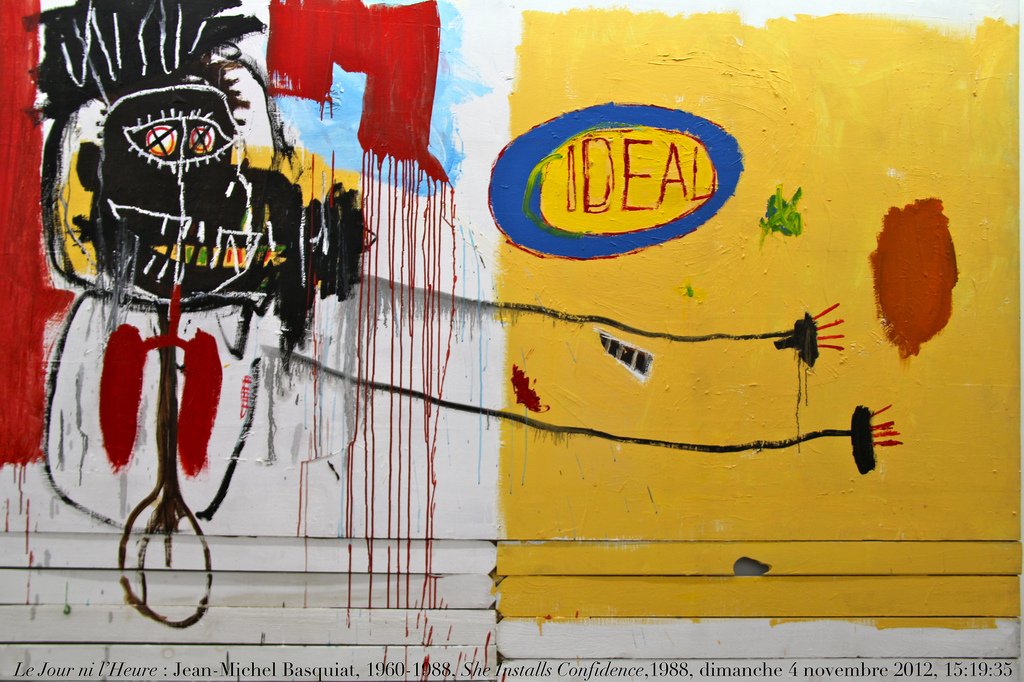 The whole foyer was bubbling with childish excitement, and this did not decrease; in fact, upon entering the main exhibition space, the atmosphere was positively abuzz as people talked and greeted and gawped and whispered all while jazz floated through the rooms from indeterminable sources. While this could easily be explained away by the fact that this is an unprecedented event for Britain, being the first ever large scale exhibition in the UK of the American artist Jean-Michel Basquiat, it was more than that; there is also an undeniable energy, which has been infused throughout by the curators, and works as the perfect celebration of this eclectically influenced and multi-sensory artist.

The exhibition has been set up across two separate floors, though united by a large tower with a video projection of Basquiat dancing, painting and talking along with his quotes printed around the top. The ground floor focuses on the wide ranging array of influence and therefore reference throughout his work; and it’s here that it becomes immediately clear that this exhibition almost above everything else, aims to decode the artist. His paintings and drawings are accompanied by stretches of explanation and glass cabinets filled with ‘treasured’ possessions of his, which relate to aspects seen throughout his oeuvre. While this is of course very interesting and impeccably researched and planned out, at times it feels as if the curators have hindered their success through over wrought detail. Basquiat’s work needs to be looked at; this may seem like a pointless truism, applying to all art, however, Basquiat arguably requires particular effort upon inspection. His pieces are not one-line sketches or pure swipes of colour; instead, for the most part, they are filled with multiple layers of intricacies combined with big explosive compositions and colours. It is art therefore which absolutely cannot be skimmed, yet is simultaneously very easy to quickly look over, become overwhelmed then swiftly move on to the explanatory panel without taking anything in. It is art that speaks to you rather than needs explaining, and at times, the extra information is not just distracting, but entirely superfluous; for example with titles from Basquiat like ‘Leonardo da Vinci’s greatest hits’ we don’t really need to be told Leonardo was a key influence.

This issue was epitomised in the penultimate room of the ground floor, which was filled with every page of Basquiat’s composition notebook (including the front and back cover) framed and chronologically hung. Something about this felt very wrong, and although it was interesting, there was an element of the surgical knife about the deconstruction, rather than of pure artistic expression, and the uncomfortable feeling of unethical dissection was exacerbated by the sounds of Basquiat himself rapping Genesis from a speaker positioned above in one of the corners. There is something very different about writing or drawing in a book than the art created on a piece of paper, an integral part of a book is the ability to close it, and the curators careful but ardent disregard of that felt like a self-conscious sacrifice of emotion for the sake of complete coverage of information.

Ironically, on the top of the central tower was a quote from Basquiat saying; “I don’t know how to describe my work, it’s like asking Miles, how does your horn sound?” yet the exhibition at times felt like it had self-awarded itself the authority to do just what Basquiat claimed impossible.

However it would be doing a disservice to Basquiat to suggest that this made a terrible difference to the appreciation of his work. It has never been more clear how profoundly his art opened the door for a majority of artists working today. For those previously unfamiliar with his work, the incredible ground-breaking way he catapulted into the world of art could be missed as a result of familiarity with those inspired by him. This however would be like listening to The Who and dismissing them as ‘unoriginal’ because they just sound like Mcfly.

The upstairs section, which aimed to focus on his diversity as an artist more successfully tackles the ratio between art and education. It was both interesting and, at times, deeply touching to learn about Basquiat’s roots and relationships with other artists; and the paintings themselves stood out with incredible power. Suitably, for one so often referred to as the next Van Gogh; his self-portraits were some of the most stunning pieces of the show, both haunting and politically sharp with their ‘black boogie man’ stereotype undertones as well as deeply moving, the whole room dedicated to them captivated.

One thing the show unequivocally succeeded in was bringing Jean-Michel Basquiat to life within the exhibition walls. From the self-portraits, his ‘Beat Bop’ music playing intermittently upstairs, large scale projections of one of the few interviews he ever gave and the indie film ‘Downtown 81’, his presence seemed to fill the whole space with youthful vitality and fun-loving charm. It was just as much an exhibition of the man, and his beautiful face, as it was ‘the artist’ and his work.

However as a result they notably didn’t put much focus on his sad demise, as the curators made very plain in their introductory speeches, apart from being an interesting retrospective of a relatively unseen artists work, it was an important exhibition shown at the opportune moment, ‘the time is now’ they kept quoting and repeating. It is clear that they were painfully aware how poignant the story of a young working class black artist from Brooklyn is at this time and wanted it to be a celebration of black success and strength and talent, rather than another tale of woe and misery. While this may have been the easiest path, it is also entirely understandable.