Cambridge were the odds on favourite coming into the race 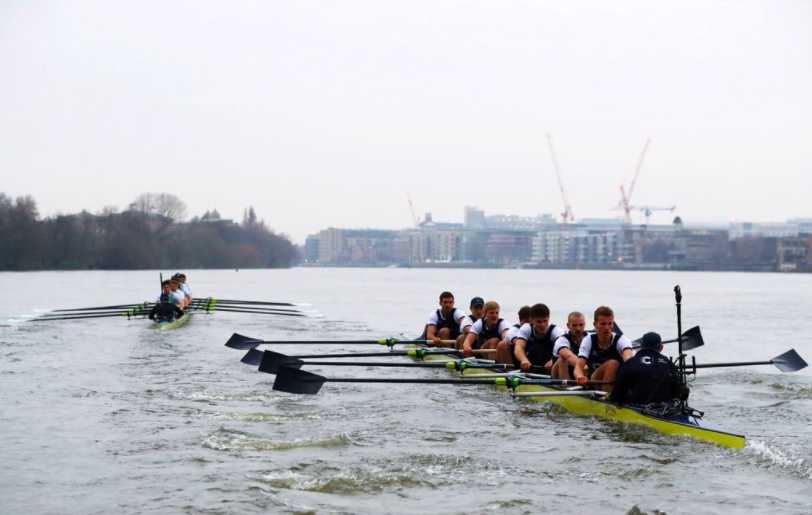 Fred Dimbleby
Fred, a second-year Historian at Keble, was the paper's editor for Trinity Term 2018 alongside Matt Roller. He started out as Cherwell's comment editor last Hilary.
24th March 2018

The Cambridge Men have won the 2018 Boat Race by 10 seconds.

Cambridge led from the off after a tricky start where the teams came close to clashing.

Oxford looked like they might hold on and kept up with Cambridge for the first five minutes of the race. But, as the crews past under the Hammersmith bridge, Cambridge’s lead became insurmountable. They finished three lengths ahead of their rivals.

Flares were let off by environmental protest groups from both universities as the boats crossed under the bridge.

We are out of time on climate change. Fossil fuel companies still have 3x more fuel than is safe to burn in reserve. Oxford & Cambridge claim to be world leaders – they cannot remain complicit! #TheBoatRace2018 #BoatRace2018 #OxbridgeDivest pic.twitter.com/Lhib7lKnbW

Cambridge’s final time was 17 minutes and 51 seconds, which marks a strong performance for the now dominant boat. This is the seventh win for Cambridge since the millennia and gives them an 83 to 80 lead in the boat race overall.

He added: “They took it up from stroke one and bang, they were off. In this race, so many things can go wrong, but you could tell they were on the money today.”

Cambridge entered the race as odds on favourites and, being the heavier and more experienced crew. Oxford had had a tough week with crew troubles making the national headlines. Returning blue and experienced rower Joshua Bugajski left the boat and was replaced by Benedict Aldous.

Aldous, who rowed in sixth seat, made national headlines last year when he was banned from JCR events at his college, Christ Church, after attending a ‘2016’-themed bop dressed as a member of the Ku Klux Klan.

The loss caps off a disappointing day for Oxford rowing with all four Oxford boats, including the women’s crew and the reserves’ crews, losing their events. It is the first time that Cambridge have won all four races since 1997.