The theme was subsequently changed to “80s Icons” after members of the JCR expressed concerns that the theme could have encouraged appropriation of the LGBTQ community. 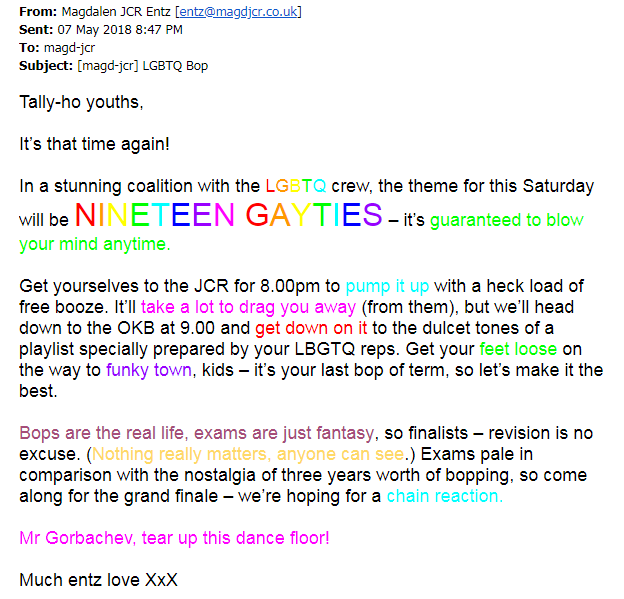 The theme was subsequently changed to “80s Icons” after members of the JCR expressed concerns that the theme could have encouraged appropriation of the LGBTQ community.
A student wrote on Oxfess this week: “I’m at Magdalen and I’m a gender non-binary gay man. With the bop fiasco, flying the rainbow flag and now this obscene JCR motion, I have never felt less welcome anywhere.

“When the bop email came through I cried for the first time since coming to uni. When I saw the JCR motions this week I cried again.

“I hate that my sexuality is made into a spectacle.

“I hate that people who have no clue about gender identification issues got to vote on it; you should have all abstained.

“If the college does fly the rainbow flag for a whole month I don’t know what I’ll do. Why do people want to be singled out? Why does who I fall in love with mean I merit a flag?

“Why am I supposed to be paraded around as something exciting and fun and rainbow-coloured? I hate the whole thing and the LGBT reps could not represent me less.”

In an email sent to members of the JCR, LGBTQ rep Phoebe Spruce said: “Felan and I take full responsibility for the decision to hold an LGBTQ centred Bop, and for the theme being the 1980s, and we deeply apologise to anyone who felt unsafe or victimised by this bop, and felt they could not raise their concerns with us.

“My intention was to celebrate the queer community at Magdalen, and follow on from the final bop last year, which was also LGBTQ focused. We did not intend for the focus to be on the unfortunate treatment of the community during this decade or make a mockery of the people, nor the situation, but rather to be a celebration of the community, and to partake in some of the 80s’ fun party atmosphere. (And, to be quite honest, the wordplay was quite convenient).

“We also intended for the theme to celebrate the music of the 1980’s, especially the queer artists, who did feature heavily during this time. We do understand that it is still perhaps an insensitive choice, and in hindsight could have been chosen more aptly.

“We do wish for the bop to be a safe and welcoming environment for all members of the college, and so we will be altering the bop theme to 80’s icons, so as to not create an uncomfortable environment.

“Hopefully the change of theme and focus will address these issues, and I sincerely hope this will not put anyone off from attending the bop or subsequent LGBTQ events. Again, sincere apologies for the distress this may have caused.”

The entz team added: “As the Entz team we would like to reiterate the sentiment expressed by Felan and Phoebe.

“Bops are intended to be a fun environment and an escape from work where everyone should feel safe.

“Hopefully this change of theme should keep the bop fun whilst addressing the issues mentioned above. We also ask that bop attendees please keep their costumes appropriate and sensitive.”