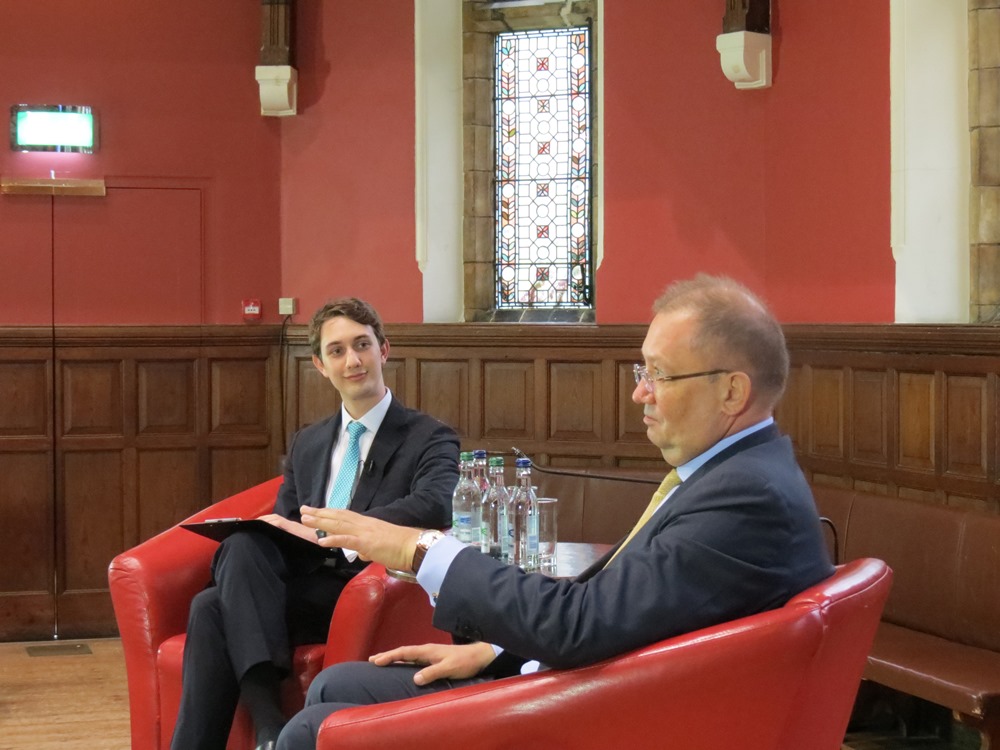 Angered students confronted the Russian ambassador to the UK on Tuesday, as the Oxford Union faced criticism for hosting both “a stooge of the homophobic Putin regime” as well as “an abhorrent transphobe” either side of Oxford Pride.

On Tuesday, Alexander Yakovenko was forced to defend Russia’s record on LGBTQ+ rights, as students questioned him on the Russian state’s reported torture of gay men in Chechnya.

The ambassador provoked widespread criticism when he denied there was an issue, claiming: “It’s difficult to say if there are any gay people in Chechnya”.

Meanwhile, Germaine Greer – who has previously said transgender women “can’t be women”, and who provoked protests the when she spoke in Oxford in 2015 – will speak at the society next week.

A Union spokesperson told Cherwell that it was “unfortunate that many have found the invitation of the Russian Ambassador ‘hugely insensitive'”.

During his speech, Russian ambassador Yakovenko spoke of his national pride, showing a four minute film displaying some of the highlights of the country – complete with orchestral soundtrack and English voiceover – and ending with a Russia-themed quiz. Russia goodie bags were awarded to the winners, and to Union president Gui Cavalcanti.

However, when the question and answer session began, he was confronted by several members over Russia’s treatment of LGBTQ+ communities in Chechnya, where authorities have reportedly round up and tortured more than 100 gay men. The Kremlin has denied the allegations.

Keir Mather, a History and Politics student at Wadham, said: “Ambassador, I’m a gay man. And if I lived in Chechnya over the last year I would have run the risk of being imprisoned, and tortured, and possibly killed by either my family or the state.

“On behalf of all the LGBT Chechnyan people who will not have an opportunity to ask a question because they’re voiceless, I’d like ask you why nobody who’s perpetrated these crimes or has condoned them has been brought to justice, or faced any sort of criminal action, and also I’d like to ask you when the LGBTQ+ community in Russian will have their rights not only has citizens but as human beings.”

His speech was met with an extended round of applause.

The ambassador replied: “That is exactly what we’ve discussed with Elton John. He had a conversation with President Putin about this before. And later on, there were a lot of publications in Britain about the gay rights, and all this. By the way I have a lot of friends who are gays [sic]. I have no problem with that.”

He added: “If you live in Russia and you are gay, or in the so-called minority communities, you have all the rights the same as the others.”

Another student asked Yakovenko if he agreed with claims made by Chechnya’s leader that the region does not have any gay people.

“Well, I don’t know,” Yakovenko said. “It’s difficult to say if there are any gay people in Chechnya.”

He added: “Probably the numbers of gays, [sic] they are not as high as in Europe. That’s why it’s a different issue”, before claiming nobody had complained about the treatment of gay minorities.

The Union president, Gui Cavalcanti, asked him if people were too afraid to speak out.

“No, no, no. Nobody’s afraid. We have so many gays [sic] for example if you go to Moscow. You have the gay sport, it’s just a normal way of life.

“It’s not something that’s a real problem in my country.”

After the event, Mather wrote on Facebook: “Just had the chance to take the Russian Ambassador to the UK to task over the purge of gay people in Chechnya, asking him why no one who perpetrated or condoned these actions has been held responsible and when the LGBT+ community in Russia will have equal rights as citizens and human beings.

“His response was beyond appalling. I’m still sat in the chamber and am fucking shook.”

He added: “The lies, obfuscation, and complete lack of moral dignity displayed here tonight is appalling, but not surprising. The fact he’s been hosted during the same week as Oxford Pride is ridiculous.”

Mather told Cherwell: “Ambassador Yakavenko’s visit to the Union was a farce. Instead of holding him and the government he represents to account, there were propaganda videos, quizzes, and goodie-bags. The Union justifies inviting controversial speakers like Ambassador Yakavenko by claiming that once there they will face scrutiny.

“The events that took place showed they had little desire to hold Ambassador Yakavenko or the government he represents to account for their abhorrent human rights abuses.”

“The Union’s decision to host the representative of one of the most repressive and homophobic states in the world on the same week as Oxford Pride is hugely insensitive.

“To make matters worse, they are hosting Germaine Greer the week after Pride, an individual who has made dehumanising and downright dangerous comments about transgender women, and their rights as human beings.

“If the Union prioritised making its events welcoming to LGBT+ members, they could have used the time either side of Pride week as an opportunity to have positive and meaningful discussions about LGBT+ issues, with LGBT+ people. Instead, they have chosen to invite a stooge of the homophobic Putin regime, and an abhorrent transphobe, putting headlines and hype above LGBT+ members.”

A Union spokesperson told Cherwell: “Regarding the timings and dates for our speaker events, we are usually restricted by our guest speakers’ availability in trying to find a mutually suitable date, given their incredibly busy schedule. It is unfortunate that many have found the invitation of the Russian Ambassador ‘hugely insensitive’.

“The Oxford Union did not extend an invitation to Germaine Greer. To clarify, Greer is participating in a televised event with the Al Jazeera Media Network, on their program ‘Head to Head with Mehdi Hasan’. This is a private hire, ticketed event which is open to all students, not just Union members. We are helping in the publicity of the event, as well as Dambisa Moyo’s on the 12th June, as it falls during term time.”