CherwellIndependent since 1920.
Culture Theatre Review: House of Improv presents: I’m an Improviser Get Me Out of...
Facebook
Twitter

Upon walking in to the Pilch, I’m pleasantly surprised to find a blank sticky note waiting on my seat. As part of the dreaded ‘audience interaction’, I can suggest any name I fancy, which will promptly be turned into one of the six contestants on the reality show we are about to watch. I can, unfortunately, confirm that audience suggestions are taken into account, as my ruthlessly unimaginative ‘Bluebell McButtercup’ made it into the running as a pyrotechnic PTA member (handled well by Kilian Lohmann, who did the best he could with my shoddy prompt). So begins I’m an Improviser Get Me Out of Here!, House of Improv’s latest venture into a fully improvised, one-hour performance.

Having been fortunate enough to watch House of Improv’s Family Secrets last term I’m familiar with the format – but what strikes me most is how much this troupe have refined both process and skills in just a term. In large part, this is due to the new engaging reality-show theme, but also due to a switch-up in logistics– taking names from the audience pre-performance is far more efficient than inventing (and re-inventing) them mid-flow, and the sticky label prevents cases of forgotten identity. I believe the whole affair has been shortened as well – a snappy 60 minutes – which zips along at a fair old pace, with only a few scenes which start to drag.

Most importantly, the troupe have picked up on what they do well – character tropes – and brought them to the fore. It’s something which is handled brilliantly by the new format: a short ‘audition tape’ from each of the characters introduces some backstory from the get-go (and probably gives the actors time to think), while a live vote-off introduces an impetus for drama – an impetus, at least in tonight’s President of the Moon competition, which was duly filled.

As might be expected, there are some undeniable scene-stealers. By far the best tonight is Augustus, knowingly played to the audience by Emma Hinnells, who plays the man-spreading, “yes-of-course-I-know-how-to-roll-a-cigarette” ‘Stus’ with absolute aplomb (“I went to a difficult inner-city comprehensive called Westminster” gets a laugh from the get-go). Equally effective is Eliza McHugh as ‘Sebastian the Angry Vegan’, who lives up to the incredibly specific prompt with eye-watering intensity. Such was the blossoming romance of the two on this particular night that some secondary storylines fell into the background – to an extent it may be a true case of you get what you give, since we’re the ones who provide the suggestions, but some characters aren’t quite developed to their fullest extent.

As usual, Will Jefferson (in a very literal, pyrotechnic, take on ‘Mr Burns’) is on hand to steer the plot in some kind of coherent direction, even remembering to shut the ‘door’ and turn off the ‘tv’. The whole thing is underscored with remarkably subtle skill by keyboardist Matthew Kemp and with lights by Jake Shapter; part of their talent is in hardly making you notice they’re there, but they underpin the whole thing beautifully. There’s still a lot of bugs in the running of the show which shouldn’t be there, and sometimes it falls a bit flat, but it’s great to see some new blood in the troupe, and a call for audiences to attend their workshops at the end is a welcoming touch.

The nature of improv means, of course, that every night will be different – which makes reviewing for a potential audience no easy task. What I can confirm, however, is that the whole thing is relentlessly silly, and it’s refreshing to see a show and cast which doesn’t take itself seriously – both troupe and audience genuinely seem to be having a good time throughout. It’s not the most polished piece of work, but it never claimed to be – what it is is a piece which, while still not quite there yet, seems to be having an amazing time on the journey. 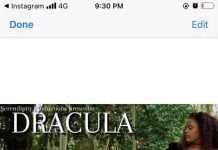