What do modern performances of Greek tragedy say about the constancy of human emotion? Despite the ever-enduring and painful pervasiveness of the phrase ‘It’s all Greek to me’, frequently hurled at the unexpecting classicist with the vim and confidence of a comedian on Live at the Apollo, it should be clear that ancient Greek tragedy is something which does, in fact, receive love and understanding from its modern audiences.

For starters, if there were not an active appreciation of Greek tragedy it would not be continually staged with the dogged determination that it is continually presented with. This is evidenced by Oxford’s recent all-BAME production of Medea directed by Francesca Amewudah-Rivers at Keble College’s O’Reilly Theatre, along with the endless examples in professional theatre.

The Almeida’s Greek Season in the summer of 2015 was a particular hit which saw not only readings of the Odyssey and Iliad but productions of Medea, Oedipus, The Bakkhai, and an utterly extraordinary performance of the Oresteia directed by Robert Icke. Other notable examples are Helen McCrory’s Medea at the National Theatre and Kristin Scott-Thomas’ Electra at the Old Vic.

Despite the fact that Greek tragedy is still hovering around modern theatre with the air of an over-anxious helicopter parent, given the original context of Greek tragic performance it is not entirely obvious why this is. Greek tragedy hit its vogue, like so many things, in Athens around the time of the 5th Century BC. The big players of the era were Aeschylus, Sophocles, and Euripides, all of whom were whipping out sordid and tragic tales.

Unsurprisingly given this was all happening over 2000 years ago, theatregoing has undergone some pretty drastic changes. It seems unlikely, for example, that women were allowed to go to the theatre in 5th century Athens. Going to the theatre was considered a ‘citizen’s duty’ and women, entirely confined to the religious and domestic spheres, were not citizens. This leads to queries about how plays about women and their intimate feelings and emotions could possibly stand the test of time when they are originally written by a man, performed by an all-male cast, and performed to an all-male audience (such as Aeschylus’ Clytemnestra, Sophocles’ Antigone and Euripides’ Medea). How could something with such a background hold resonance for a modern female audience?

Another issue is the standard by which tragedy was judged, as it was not necessarily evaluated on its entertainment value like art so often is judged today, but instead on its ability to present two sides of an argument to an audience and have them emotionally engage. Every visual aspect was also bizarrely mannered: performers would have worn masks and, in order to be seen from the back of the amphitheatre, platform shoes.

What is clear to see is that Greek theatre, in its original form, with its original performance conventions is, thankfully, not the ‘thing’ which has endured into modern day British theatre. Due to that rogue phenomenon known as equality of opportunity, I imagine the National might receive some backlash if its ushers started to reject women, alongside glass cups, from its auditoriums. This means that what is left of Greek tragedy, when the performance strategies are taken away, must be the elusive, ‘enduringly successful’, element.

An interesting case-study to look at is the previously mentioned Robert (not David) Icke’s lizard-free production of the Oresteia at the Almeida. Over three hours long, this production completely reworked the entirety of Aeschylus’ Agamemnon, The Libation Bearers, and The Eumenides. The reworking was comprehensive: the entire character of Electra was (through use of modern psychoanalytical theories) presented as figment of Orestes’ imagination, created by him due to childhood trauma as a means by which to cope with his own emotions.

Additionally, the lead up to the sacrifice of Iphigenia by her own father was heavily focused on, although in Aeschylus’ Agamemnon the emphasis lies in the fall-out of the act. Given that this play removed even more than usual from Greek tragedy it is particularly interesting to see what is left. What is left is the fact that it is the same stories that are being told.

We then must think about why these stories have stood the test of time. It is certainly not because everyone has a next door neighbour who has decided to shuffle her children off of this mortal coil in order to spite an ex-boyfriend (@Medea), so what is it that remains?

The sentiments of jealousy, vengeance and loneliness (again @Medea) are what have stood the test of time. People cannot directly relate to the choice that Agamemnon has to make in regard to sacrificing Iphigenia (filicide not being fun family weekend activity) but the love one has for one’s child and a sense of duty are feelings which have remained. These stories, which present an audience with situations that induce powerful human emotion, are eternally captivating.

The themes raised can also hold specific relevance at different points of human history: for example, a production of Antigone performed by Syrian refugees in Beirut, Lebanon. The political situation in Syria and the political situation presented in Antigone is similar; it is interesting to note that societies across the world are still torn apart by war, while tyranny as ‘an innate human greed for power’ has also sunk its claws into the historical timeline.

The main themes of this play being insurgency, rebellion, and disobedience, Antigone held extreme relevance for the women performing it in 2014. Antigone herself asks the same questions a lot of them were asking themselves: did they do right or wrong in deciding to ask for freedom?

It is interesting, however, to see how the practicalities have changed. We might be surprised today, for example, if there were only three actors allowed on stage at a time, or if they were all wearing masks. These conventions would seem strange to a modern audience, detracting from the message of the play rather than adding to it. Modern interpretations of Greek tragedies allow the core message to be retained, while elements of modern theatre practice are used to maximum effect – for example, the absence of masks allows the actors’ facial expressions to be seen, increasing the emotional intensity of the performance.

Yet again, it is these emotions and these feelings which are the same 2500 years later. Feelings of want, greed, and desperation for security. The pain of losing a family member; the intense love one feels for another.

Despite the fact not just the pure and clean emotions have survived – jealousy and hatred are just as prevalent in Greek tragedy, if not more so, than love and joy – there is something comforting in this conclusion. Something comforting in being able to say that humans have remained the same, imperfect as they are. We have not become removed from the fundamental emotions that make us human. Sadness has not become ‘all Greek’ to us. 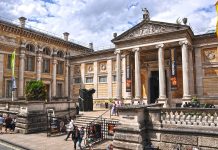