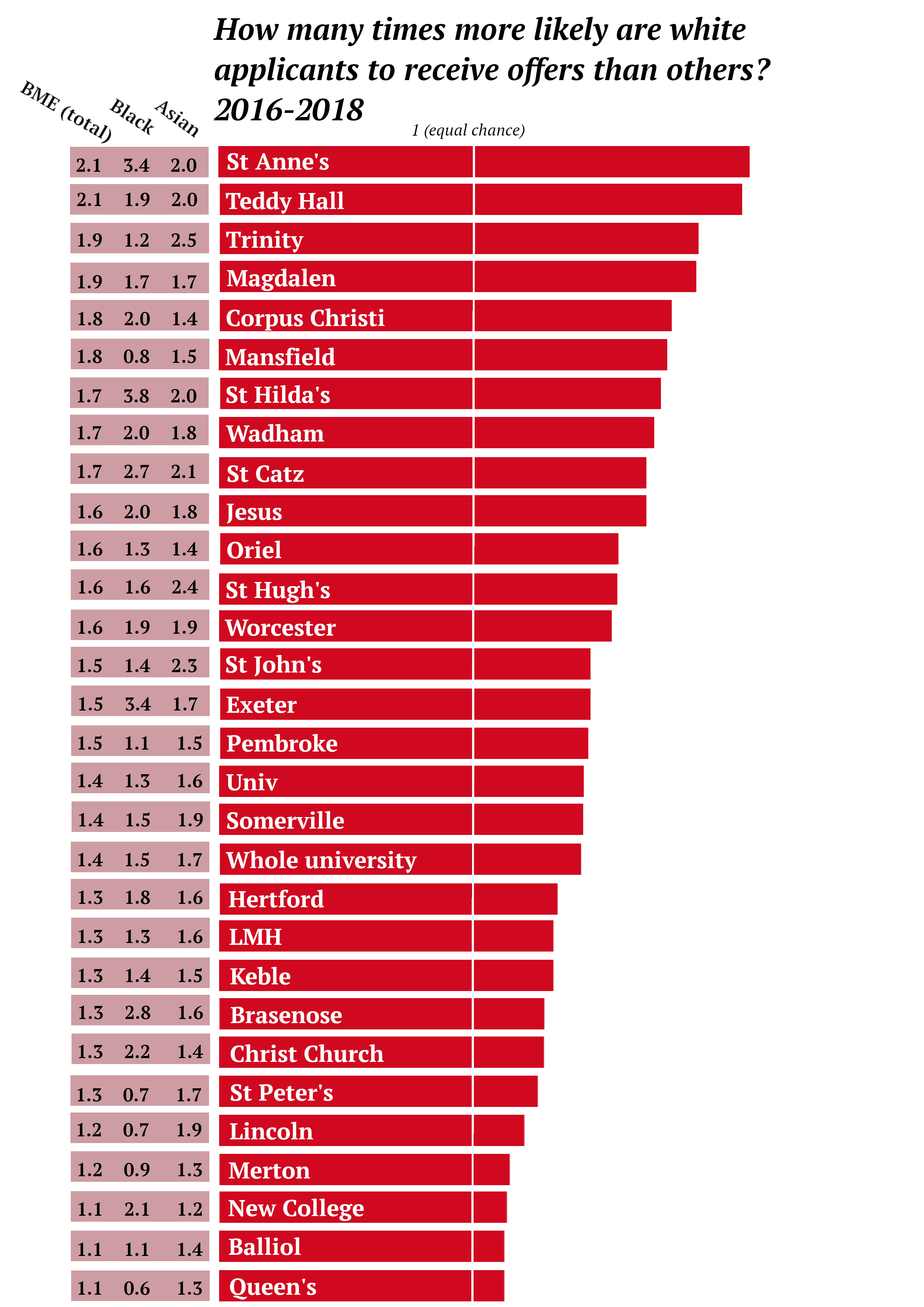 The University of Oxford has released its 2019 “Annual Admissions Statistical Report”, presenting minor improvements in accessibility in all categories and a significant increase in the total number of applications.

In her introduction to the report, Vice Chancellor Louise Richardson wrote: “It was precisely because of our concern that the pace of change was too slow that this year we are increasing the size of our flagship summer programme UNIQ by 50% to 1375 school pupils.

“We also announced the creation of two new programmes, Opportunity Oxford and Foundation Oxford, which we believe will significantly accelerate the pace of change. When both programmes are up and running in four years’ time we expect that one in four of those admitted to Oxford will be from a deprived background.

“The entire University community, colleges and halls, departments and divisions, have united behind a commitment to effect a sea change in our admissions practices.”

In a statement to the press, the University said: “The new figures, for Oxford’s 2018 intake, show a solid foundation for the two major access initiatives announced by the University last month, which are due to accelerate the pace of change dramatically.

“The report is being published for the second year, as part of the University’s commitment to greater openness about its admissions process.”

The statement also claimed that: “Early figures for 2019 entry show still more progress. Offers to state school pupils are up again, to 64.5%.

“Offers to students from areas of low progression to higher education is up to 13.8%. However, the University is determined to move faster.”

Oxford SU’s VP for Access and Academic Affairs told Cherwell: “It is a major positive step that the University is continuing to release annual admissions data.

“The figures themselves show an incremental improvement – which is welcome, though still not at the pace we would like to see.

“Oxford SU has campaigned hard over the past 18 months to see tangible work be done to improve these figures and the future plans around the two major initiatives will go a long way to bring around a sea change.”

Students from London and the South East made up 47.2% of all applications and accounted for 48.7% of students admitted to Oxford in the academic cycles of 2016-2018. Of the 1577 increase in applications in the last year, 49% was accounted for by increased applications from these regions.

The figure is significantly greater than undergraduates from the North East, who comprised 2.1% of students admitted over the period, with 159 students matriculating from the region, versus 2,005 from the South East.

Scotland, Wales and Northern Ireland together accounted for 6.6% of admissions. The University’s breakdown of application and admission by region pairs together figures from the last two admissions cycles, showing an ongoing gap in numbers of admitted students between regions in the South of the UK and those in the North.

When compared to 2016-2017 statistics, successful admissions by London increased by 4.2%, but this positive growth was not shared by the South East. The region saw another 266 applications when compared to the previous cycle, but still registered -1.2% decline in successful candidates.

Almost all regions around the UK measured a slight decrease in admissions, averaging -1% across the board, a statistic that comes in light of increased competition for places and a rising acceptance rate for international students.

The number of students applying to Oxford from UK state schools has increased by 5.7% from the previous year, a rise of 442 students, whilst the number applying from independent schools rose by just 0.5%.

Over 90% of students admitted to study at Mansfield attended UK state schools, compared to just 48.3% at Trinity, the worst-performing college. Over 60% of students were admitted from state schools at 12 of Oxford’s 29 colleges. Only Trinity offered fewer than 50% of its places to state educated students.

The POLAR system is a tool which measures how likely young people are to participate in higher education based on where they live. POLAR 1 and 2 are the most disadvantaged backgrounds listed.

The number of BME students as a proportion of all admitted students has risen since 2014, from 13.6% to 18.3%. However, there is significant variation between colleges. At Magdalen, BME students make up just 10.8% of UK students admitted, compared to 21.8% at LMH.

The proportion of UK-domiciled undergraduate students admitted to Oxford who identify as female has risen every year between 2014 and 2018. In 2014, 46.5% of admitted students identified as female, whereas last year the total had risen to 51.2%. For comparison, among Russell Group universities as a whole the most recent statistics in 2016 show that 55.4% of admitted students were female.

The University’s report also contained a breakdown of gender by subject, demonstrating a “wide variety” in male-to-female ratios among Oxford’s 25 main courses. The results covered UK-domiciled students over a three-year period between 2016 and 2018.

Experimental psychology, Biomedical sciences and English recorded the highest proportion of female UK students, with 79.3%, 74.7%, and 72.1% respectively. However, only 9.8% of UK students admitted to study Computer Science identified as female. Maths and Computer Science also saw a low intake of women, at 15.8%, with Physics at 18.3%, Engineering Science at 20.2%, Economics and Management at 27.5% and Maths at 28.5%.

Across the three-year 2016-2018 period, 19,301 UK men applied in total compared to 18,488 UK women. At the majority of colleges, more men applied than women, though this was not true at Lady Margaret Hall, which received 707 applications from women compared to just 486 from men. Similarly, Wadham College had 868 female applicants and only 684 male applicants.

The report also showed that the majority of colleges had a relatively even male-to-female ratio. However, this was not true of Balliol, where only 38.7% of students admitted were female, making it the college with the most unequal gender split of UK students. Female students also made up only 40.7% of total UK admissions for New College and 44.4% at Magdalen.

Lady Margaret Hall and St Hilda’s College had the highest proportion of women, with 57.9% and 57% of the total admissions respectively. Both of these colleges are former women’s colleges, as is St. Anne’s, in which 55.7% of total admissions were given to women. At Hertford, female students made up 55.8% of admissions.

This figure for Oxford’s 2018 intake is slightly lower than equivalent figures for other universities. The most recently published statistics in 2016 show that disabled students made up 11.9% of the total intake at all Russell Group universities.

The report also included a study into the categories of disabilities among applicants over the three-year period. Approximately 36% of these students declared themselves as having a learning difficulty, such as dyslexia, dyspraxia, and ADHD. A further 18.9% declared a disability that was categorised as a mental health problem.