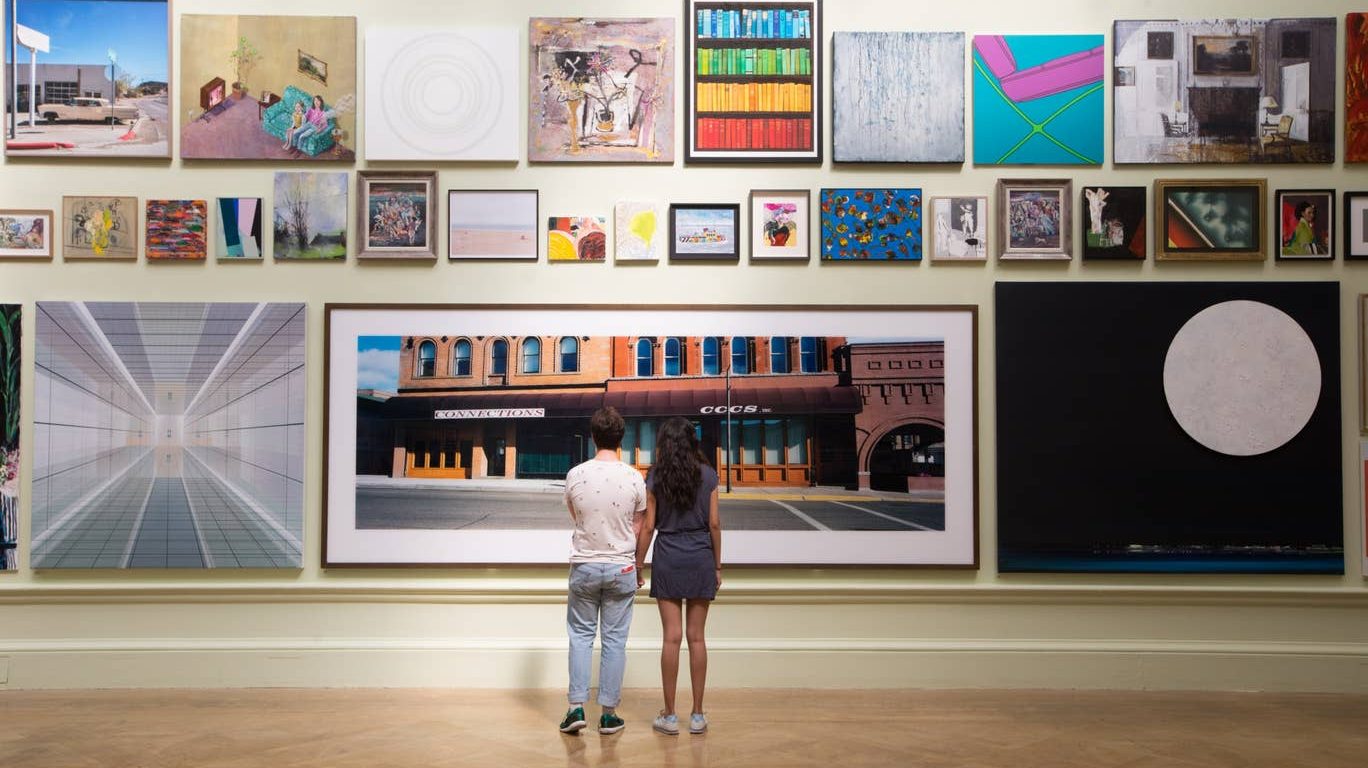 There’s something particularly depressing about London in the rain.

Stood drenched outside the Royal Academy, soaked, miserable and clad in a tweed jacket and shirt my Mum made, I looked “suitably artsy”. Or half like I should be running after Andie MacDowell to declare that I’d like to spend the rest of my life unmarried with her. Though maybe I looked more like a lost Geography teacher than Hugh Grant. Arriving inside, I flashed my soggy ticket at the lady on the door and squelched my way into the Royal Academy’s 251st Summer Exhibition. Fortunately, it was more than enough to distract from my encroaching trench foot.

Running since 1769, the Summer Exhibition is the world’s largest open-submission art show. From film to photography and prints to paintings (and everything in between) the show brings together the world’s leading artists of all mediums, both household names and total unknowns. Painter Jock McFadeyen RA curated this year’s exhibition, with over 1,500 works, mostly previously unseen. The result is unsurprisingly eclectic; to quote Mum, ‘a hoot’, and she wasn’t far wrong.

This year the exhibition is nominally linked by a theme of borders; the term ‘theme’ loosely applied as is to Pierce Brosnan’s crooning of S.O.S in Mamma Mia. This is immediately realised (the loose theme, not Pierce’s singing) when entering the exhibition into a room labelled the Menagerie. Dedicated to our national love of animals, it features a brilliantly bonkers mix of colourful paintings, sculptures and photographs of all shapes, sizes and genus. I loved it: a tedious Banksy aside, it was replete with quality, including a gloriously weird two bottomed dog sculpture from Charles Avery. Rather oddly, however, were the wall-spanning photos of Nelson Mandela’s hometown. An inspiration of course, and the photos were good, but amongst the Zoo its prescence felt a little out of place. However, this is quickly forgiven in light of Jim Naughten’s suitably grumpy King Kong, which stole the show and justified the theme alone.

Moving into the main hall, the exhibition broadens out; the room is McFadeyen’s personal focus, and he’s done himself proud. Each wall centres on a huge painting addressing a topical theme. Stand outs include Marcus Harvey’s The Victory – a frenetic mash up of Turner, a nude and what appeared to be an England flag nicked from a down-at-heel pub – and Ben Johnson’s transfixing, perspective-confounding The Space Between Revisited, yours for as little as £108,000. But the main attraction was a huge work by Anselm Kiefer (with a very long name in German) which continued his life’s work of exploring what it means to be European, with a piece that captured perfectly the tension and fractiousness of our contemporary continent. All in all, a room of colour, variety, and serious quality.

Schlepping into the side rooms (my shoes still hadn’t dried), the quality continued. A room devoted to architecture was stoutly bonkers, with cities sprawling into the sky and houses made of rubbish washed up on beaches. But the art really came to life in the rooms with more explicit (and explicitly topical) themes. One room for example, focused on migration and statelessness, including a powerful bronze of a man without a face by Thomas Schulter. Coupled with the film piece, Miss DMZ,  focusing on the Korean peninsula, it captured an enduring sense of isolation and helplessness. Another favourite room centred on climate change, with Thaw, a sculpture of a polar bear and its iceberg home melting. Its flaky texture, though similar to shredded wheat, powerfully delivered a resonate message. The room also held a tiger made entirely out of Tunnock’s Tea Cake wrappers from Scottish sculptor David Mach, justifying the entrance price alone.

Some more standouts still lie ahead. Inventiveness abounds; Tim Shaw’s sculpture of crows bickering entitled Parliament, though not very subtle, was suitably imposing, and Claire Douglass’ The Garden of Earthly Delights, which somehow combines Gok Wan, Trump and all manner of 12+ content in one deliciously naughty whole. Overall, this is an exhibition packed full of gloriously varied and interesting pieces.

Of course, not all agree. One particularly nasty review from The Guardian’s Jonathan Jones decided anything good in the exhibition was European, with the British artwork being uniformly awful, , commenting that this “pitiful array of the overpromoted and the underthought makes you wonder what will become of the British, left to ourselves” after Brexit. What a load of twaddle. Not only does this exhibition show British art in rude health, it shows how wonderfully internationalist British art always has been and will remain. After all, British art can’t be in such bad repute if the world’s best are still desperate to have work displayed in the Royal Academy.

But I would strike one note of caution. This exhibition rightly embraces major global-minded themes, like climate change, the environment or statelessness. But I found the most powerful piece to be David Hepher’s Hey Wayne on the Meath Estate. This contrasted Turner’s classic with a stark example of inner-city poverty. It is a powerful reminder that as much as we privileged art-lovers can enjoy losing ourselves in an expensive exhibition, or recline in armchairs pondering big universal themes, or hope that we look like a soggy Hugh Grant, there’s real poverty that needs addressing in Britain today. It’s almost ironic; this year, unintentionally, the Royal Academy’s best message is a little less art, a little more action, please.