I have somehow managed to go three years on the Oxford performance scene without seeing a single Oxford Revue sketch show. Shocking, I know. Not intentionally – just, like so many things, I’ve always taken for granted that they’ll be there. It’s for that reason I feel incredibly privileged to finally see them in action today, where four members of the Revue take on a dizzying array of sketches, scenarios, and characters. The actual Revue will showcase the talents of six members, along with a compère – “There’s actually only two men this year,” I’m told somewhat gleefully.

The Revue show in eighth week this term – The Oxford Revue and Friends – is an hour long, and split between the Oxford, Cambridge, and Durham comedy troupes – Cambridge and Durham will have a half-hour each, followed by Oxford for the final hour. It’s a lot of time to fill with a series of two-minute sketches, but the variety I see here leaves me with no doubt that they will be able to achieve it. I’m told that the different Revues don’t communicate when devising their work, but performing with each other multiple times a year has given them an idea of their individual styles, each bringing something slightly different to the table.

The first sketch I see introduces me to their unique, strangely surreal brand of humour – I’m told at the end it’s “Goldilocks and the Three Bears from the perspective of the porridge”, which answered my unspoken question as to what the hell was going on – and is swiftly followed by a catty visit to the zoo, replete with side-eye as a mother and father duo attempt to have an argument without alerting their baby (at least, until all pretence is lost in the final punchline).

One of my favourite segments is the scene of a reading group at the Church of “St Josephine the Wanton Whore”, featuring a dramatic reading of an excerpt from Fifty Shades of Grey and an in-depth analysis of its symbolism in a Christian light (including the fantastic transition “And then of course we have the clitoris”).

Elsewhere there are plenty of laugh-out-loud moments – a conversation between a hopeful pope-to-be and a minister gets a laugh from the off (“Mr Sin?” “It’s Cardinal Sin, actually”). But what I’m most impressed by is the characterisation present throughout all of the sketches without exception. Even when a snappy punchline isn’t forthcoming (although there’s plenty of those, don’t worry) there’s an incredible physicality which allows them to switch from spelling bee participant to swashbuckling swordsman at the drop of a hat.

With the diverse audience of the Playhouse in mind – with everything from locals to students to Cambridge and Durham supporters – the troupe have tried to create something for everyone, with a diverse range of humour. I’m promised snappy openers, longer form narrative, and satire amongst the sketches. It’s certainly audience-focused, but the troupe say that it’s good to challenge themselves with different material that might be a little out of their comfort zone. The Playhouse stage allows for more ambitious projects, including musical segments and an intriguing “multimedia project” which is mentioned a couple of times. Having seen the content of some of the sketches, I quite honestly dread to think – but whatever it is, I know it promises to be hugely entertaining.

Review: Merrily We Roll Along at the Oxford Playhouse 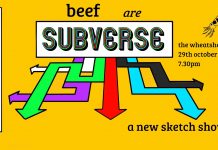