On at Tate Britain until 2nd of February 2020, £5 with Tate Collective 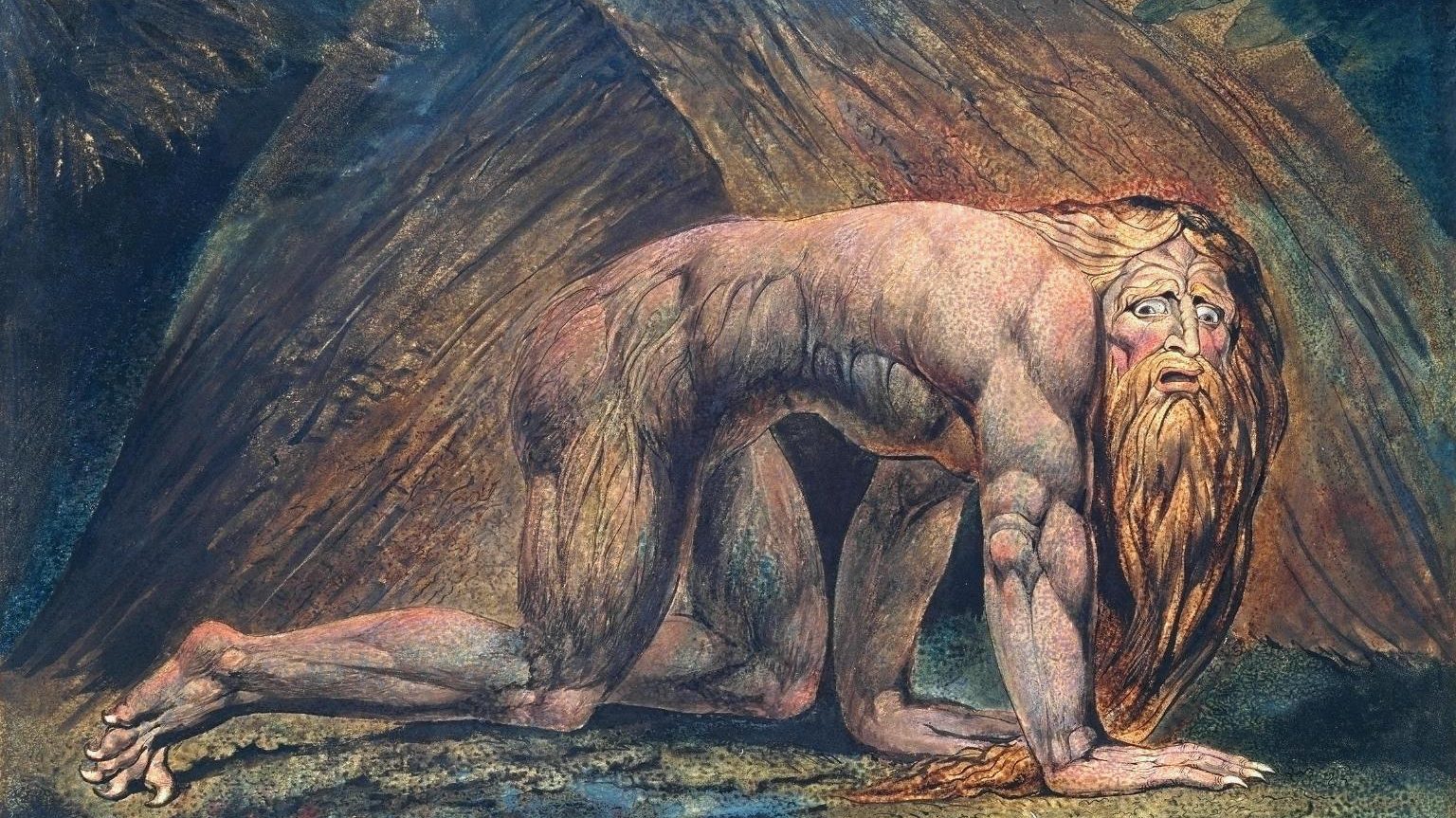 William Blake was never the artist he wanted to be, nor the one we want him to be. As with all the great Romantics, both our view of him and his view of himself are a bit too, well, romantic. The Tate Britain’s new exhibition on him is labelled “Rebel, Radical, Revolutionary”: “an artist for the 21st century”. Blake was a man of his time, but one who made a career out of revolting against it. He didn’t do that because he was some ur-Lenin, a Jeremy Corbyn of 1800 making a career out of countering an ill-defined establishment. No, William Blake was what you might call “a bit of a character”. In layman’s terms, he was bonkers.

I came to Blake as most schoolkids do: the tiger. Plus, seven years at public school meant I had my fair share of singing Jerusalem. But unlike his poetry, Blake’s art has seemed more mysterious to me. Those who know about it will have images in their heads of huge muscle-bound Gods fighting Satanic serpents; or men with big white bushy beards poking life into their world with their fingertips; or swirly, colourful scenes of pretty angels in near-psychedelic environments. It’s like Michelangelo on a bad trip. Often, even, rather terrifying.

But the Tate’s exhibition sets out to establish Blake’s position as an artist as well as a poet and to chart the whole of his not-inconsiderable career. Confronting you upon entry is his beautiful Albion Rose. It was chosen no doubt because it’s emblematic of his work for the popular imagination. It portrays a serenely powerful nude figure ringed by beautiful colour with their arms open onto the world. Albion is a central character in the complex and unwieldly mythology Blake created – think Tolkien, but less film-friendly – which runs through much of his work. As such, it could be said to be a good start to an exhibition on his life. But it’s also signifies the kind of Blake the exhibition consciously or unconsciously pushes. The figure embodies the liberating power of imagination; this is Blake the free spirit railing against the chains of conformity. This is Blake, implacable opponent of everything from traditional marriage, to contemporary politics, to mainstream Anglicanism. It’s nice that the next picture along is a supposed self-portrait, as the message of the curators is clear: Blake’s a Rebel Rebel, (though his face ain’t a mess).

The impression we actually get is that the vision of Blake as an ‘implacable maverick’ isn’t wholly accurate. Some of the featured work is impressive: I particularly liked watercolours of Joseph and his brothers (despite them lacking a technicolour dream coat) as well as early works based off his mythology. But this sits alongside the jobbery that he produced in order to make a living. In a section entitled “Money”, we see Blake’s commercial engravings. A lot of the information provided is interesting, and fitting for Blake: we’re told of a few of his patrons including the Earl of Egremont’s mistress and Jo Jonson, a noted radical. He also illustrated works by Mary Wollstonecraft whilst working on his more famous watercolours at night. But unfortunately for the Tate, they’ve already inadvertently let the cat out of the bag. The great secret about Blake is clear: he could be just as much of a hack as the rest of us.

Of course, the man had to make a living. But it’s not alone in the exhibition in taking the shine from Blake’s idiosyncratic image. We learn about the role his long-suffering wife Catherine had in assisting with colouring his engravings and finishing his work after he died. For a supposed loner, she was one of many who helped him along his way. The famous collection of aspiring artists that worshipped at his feet when he was going as grey and beardy as his pictures were just the latest in a long line of friends and patrons who, somewhat bemusedly, supported him throughout his life. It begs the question as to why the Tate wants to market the exhibition through Blake’s image as a maverick whilst going so far to undermine it.

The answer’s simple. The popularised version of Blake that this exhibition seeks to promote is fundamentally revisionist. It’s a product of the 1960s’. Contemporary academics working in the arts and humanities sought to reinvent him as a precursor to one of them; some sort of quasi-hippie, all free love, psychedelic visions and railing against the system. He was an obvious candidate; not only a writer and painter, but a friend of Tom Paine, eulogiser of the American Revolution and author of the theme tune of radicals the length and breadth of England. No public-school classical education a la Wordsworth and Coleridge for Blake; he was the son of a Soho shop-owner but driven by visions and his own force of personality to charge against his qualms at his contemporary society. He was the perfect fit for a generation of artists and curators of the Vietnam, LSD and Woodstock generation. It’s this vision of Blake that the exhibition, rightly or wrongly, tries to push. Creaking under the stubborn refusal of Blake’s actual idiosyncrasy to conform to this model, it almost causes this exhibition to collapse under its own agenda.

Which would be a shame. Not only because it would miss what makes Blake so fascinating, but because it would rob you of the parts of this exhibition that are really worth your time. By that I can only mean Blake’s unique, brilliant and rather terrifying imagination. Yes, there’s a lot here that’s underwhelming. He repeats the same pictures repeatedly and he can’t paint an animal to save his life: the tiger in the original Songs of Experience collection looks more like a cuddly teddy bear.

But for all that the entry price can still be justified for one room. Coming about three-fifths of the way in, it shows Blake at the peak of his imaginative and artistic abilities. It is wonderful. It features images drawn from Milton, Shakespeare and Blake’s own mythology. There’s Newton charting the world from the bottom of the sea; King Nebuchadnezzar reduced to a mindless animal through his affliction of madness. They are so vivid, so striking and so utterly unique. This is the Blake we want to see: resplendent in his magnificent idiosyncrasy rather than pigeonholed into a political agenda.

The rest of the gallery is peppered with other similarly great works, from his horrifying muscle-bound Ghost of a Flea to a terrifying Cerberus clenching the soul of its victim. A highlight were his representations of the recently deceased (for him) PM William Pitt and Lord Nelson as classical heroes fighting monsters and serpents in a heavenly dreamscape. I can’t see that being done for any recent Prime Minsters, but that’s Blake for you. The only big serpent in the artistic garden is the supremely idiotic choice by the gallery to hang some pictures in a replica of an 1809 exhibition of Blake’s work. Nice in theory, but lamentable in practice; the space is gloomy and shadow-filled, meaning that the watercolours are even harder to see than they were after 200 years of fading. Though, to give the Tate their due they rectify their mistake on an opposite wall.

Blake long dreamed of making his works 30 metres high in order to act as national monuments. Via some helpful projection the Tate have shown us what could have been. The power and detail is incredible. It’s partnered with a computer mock-up of a small print blown up as a tapestry in Blake’s local church, another dream fulfilled.  It’s another good idea and well executed. But it’s also sad. Both these visions show that Blake’s mind and imagination were too big for typical constraints, and that he never had the chance to realise his visions how he wanted. Ultimately, this exhibition never truly shows the extent of Blake’s genius, as he never got the chance to.

He was a man in his own world. Not only in the sense of seeing visions of angels and demons or by remaining stubbornly different throughout his life. Blake was a man who lived in and through his work. He used it to view the world wholly uniquely. His work was essential to his sense of himself and his personal world: he once attacked a Westminster schoolboy who mocked him as an apprentice engraver. I imagine that was because he felt attacking his work was such a powerful personal slight. His wife once said she didn’t see much of him since he was “always in Paradise”. That Paradise wasn’t only his visions, but his work through which he realised his own personal understanding of reality. He never fully managed that. That’s the thing that both curators with agendas and us as gallery-goers need to know. We can never truly know Blake; his world and his work were his own, and since he’s gone, we can’t every fully know what he was trying to do. It’s a good thing he was a fan of Milton; it is, in a very real sense, a Paradise Lost.