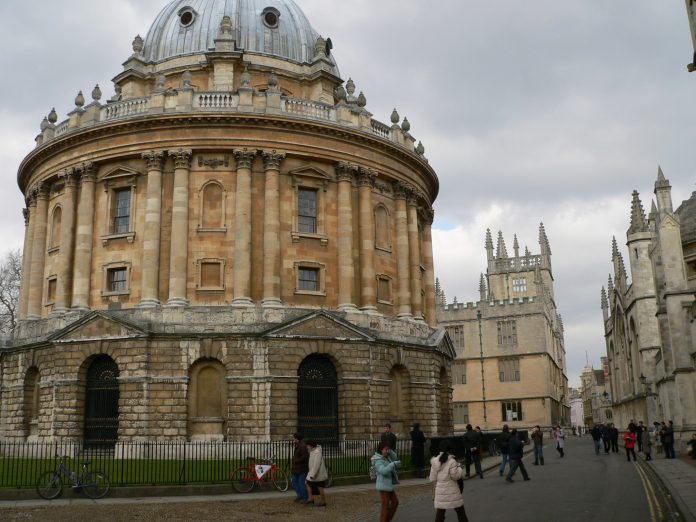 Proposition: Tourists portray the wrong side of Oxford

Little figurines of the Rad Cam; vaguely Harry Potter-themed shop-fronts; ridiculous queues to enter Christ Church: these are all the strange consequences of a quite frankly bizarre relationship tourists have with Oxford. The almost reverential treatment tourists give to Oxford may initially be nice—even exciting; but after spending over a year in Oxford, I’ve started to see a darker side to this obsession.

Like most people, when I first arrived I was in awe of Oxford: the spires, the ancient walls, the unique traditions—more than anything, the grandeur everywhere you turn. Tutes in rooms filled with extremely precious paintings; eating on tables worth more than I could imagine. I guess I sort of hero-worshipped it, and there was a constant little voice in my head thinking “Wow, I get to study and live here”. The fact that there were tourists everywhere queuing and paying to see where I lived and worked was a bit of a thrill—nothing gets you through Prelims like skipping the giant queue to the Old Bod as you flash your bod-card around triumphantly.

But quite frankly, if you think about it, it’s actually a bit weird. In fact, it’s more than weird—it’s damaging. And the way in which we cater to it as a town and as a university only makes it worse. No, I’m not going to pompously moan about how annoying all the tourists are—they have as much right to be in a public town as I do, frankly. And since the university lets them see where we eat, sleep and (sometimes) work, they have a right to be there too, I suppose. Nor does it really faze me.

But by catering to tourists, we let Oxford be defined by people who don’t actually live in, study at or go to Oxford. And this is a bad thing for us and for them. It enforces a perverse assumption that somehow we’re different to the tourists and it entrenches a mythical image of Oxford as a town still stuck hundreds of years in the past. This gives rise to a strange sense of superiority and arrogance which shimmers over Oxford—we’re all ‘woke’ enough to know that it’s not acceptable to think we are superior (and most of us probably don’t), but there’s a sense in which, in creating endless gift shops and lining tourists up outside our colleges, we’re being condescending. “Come on now, buy some of our trinkets and line up to pay to see us”.

I don’t deny that there’s great external demand to see Oxford. But the way we cater to the tourists creates a vicious circle. By commercialising Oxford—charging extortionate fees for the distinctly average experience of punting and then thrusting postcards and snow globes down their throats—we normalise this obsession. And in doing this, we harm all those in Oxford and those without. The image of Oxford is perpetrated by the media, by schools and by people who know nothing more of Oxford other than that it’s a stuffy place for the frail pale male. It’s no wonder we have a terrible access problem, because we’ve allowed a mythical image of Oxford to persist—one which is completely false. And the access problem harms us as much as them. We’re not diverse enough, and we all know it. Oxford’s moved on, and it’s a very different place to the place tourists seem to be clamouring to see.

By catering to tourists, we encourage them to consider themselves as different and at the same time to wrongly define Oxford as a microcosm of ye olde world. In doing so, our access problem becomes a self-fulfilling one and we encourage Oxford to be defined as a rich home of the intelligentsia.

And catering to tourists also ruins the whole appeal of Oxford. Not only do we allow them to define us in ways we’re not, but we start to change who we are to fit them. Sure, we don’t need to shun them, or ban them, but we don’t need to cater to them either. In catering to them we lose all the magic and eccentricity that drew both us and them to Oxford in the first place. Oxford’s so fantastic because of the people, the ideas and its achievements—so we shouldn’t let money override this, replacing Oxford as we know it with consumerism and reverential admiration-cum-obsession.

Opposition: Tourists Remind Us Just How Lucky We Are

There’s no denying that Oxford is full of tourists, and they can be a real nuisance. We’ve all had to push through throngs of them taking selfies with the Bridge of Sighs or dithering in the middle of a pavement. As a student of Balliol College, which is almost always open to tourists, I’ve heard stories of them wandering into the library and peering into students’ rooms.

So why do I think we should let them in despite all this?

Firstly, it’s a bit hypocritical of us to look down on tourists. I don’t believe for a second that there is a member of this university who hasn’t been as clueless in their own travels, be it getting the same cheesy photo at the leaning tower of Pisa or not knowing where to stand in the London Underground. Part of travelling and experiencing the world is that you won’t always know where to go and what to do, but this never stops us travelling. Just because now we’re the ones who are affected negatively, should we begrudge other tourists for what we are also guilty of?

It can be quite a weird sensation to realise that tourists don’t only come here to see Oxford’s beautiful and historic architecture. As much as any building, they come to see us. We are students of the best university in the world and on some level that makes us oddities. I experience this curiosity first-hand whenever I have to tell someone that I am an Oxford student. I feel a tiny bit of dread when I can see their minds filling with more and more questions as they attempt to put me into a category of what they associate with Oxford: am I some troubled genius or an entitled rich kid or a Boris Johnson in the making?

More than any other place, there is a lot of baggage associated with Oxford. It is often discussed how we can demystify this place and encourage a more diverse range of people to apply. Is there any better way to do that than to let people have a look rather than appearing even more exclusive and unwelcoming? Hopefully, people who look round will conclude that we are more normal than the media can make it seem. And if we are not, maybe we are worth gawking at!

I can honestly say that I quite enjoy tourists. I’m sure this wouldn’t be the case for every college – I can see why tourists are much more of a nuisance at smaller colleges and so shouldn’t be allowed in. But the colleges that are able to accommodate tourists, should. Not only for the welcome additional income stream but because I believe tourism serves a benefit that is more commonly overlooked. Tourists remind us what a true privilege it is to be able to live and study here. People travel halfway across the world to stare at what we barely give a second glance, not to mention the world-class facilities and academics that we get to work with every day. I don’t think the value of a reality check should be ever disregarded.

Scenes with Girls: In conversation with Love Song Productions