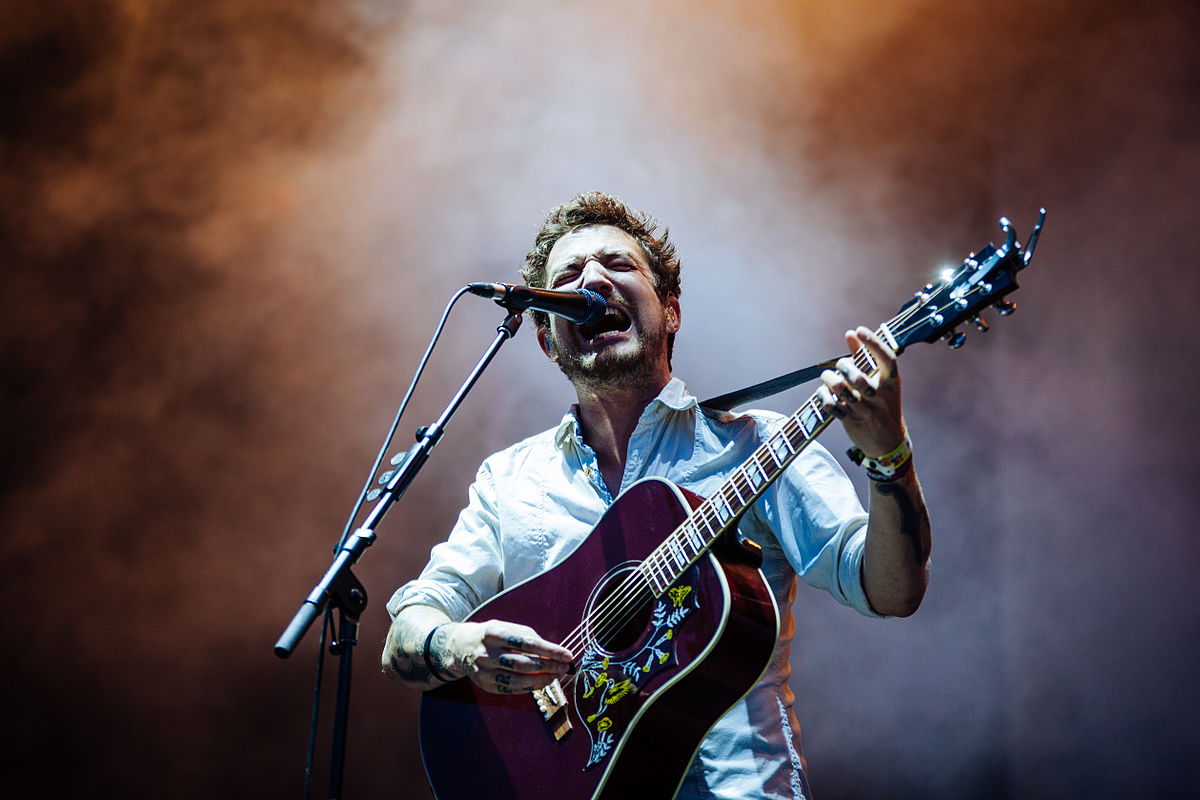 Frank Turner is an interesting character. Somehow famous enough to play Wembley and the Olympic opening ceremony, but not quite famous enough that you hear him on the radio; he straddles a middle-ground within music. This week however, the 38 year old Hampshire-born musician has proved that his appeal remains enduring, with his 2008 album, Love, Ire & Song officially Brit certified as gold. At nearly twelve years old, why has this album remained such a fan favourite?

Turner has been critiqued in recent years for moving away from his trademark confessional style of music to broader, more political statements. In contrast, Love, Ire & Song is almost uncomfortably personal. We watch Turner bleed out over a crashing guitar line in ‘Imperfect Tense’: “Naked and wretched and retching on a hotel bathroom floor/ somewhere in the City./ Three days not eating, not sleeping, not feeling good anymore/ drenched in sweat and self-pity”. The desperation in Turner’s voice is palpable, and even though it’s been many years since I first discovered the song it never fails to hit me: incredibly personal yet still remaining relatable.

This is a theme that continues throughout the album, notably in ‘Better Half’: another anthem that manages to capture Turner’s disgust in his inability to support “the lover who left me alone”, berating himself with the fact that “there must be a better half somewhere out there” for her, but he is unable to be the person she needs.

The album is not simply a list of Turner’s flaws by any means. Still with his trademark honesty, he jokes his way through ‘Reasons not to be an Idiot’, reminding us that we’re all the same: “you’re not as messed up as you think you are/ your self-absorption makes you messier.” This was a message I needed to hear when I first listened to the song as a melodramatic fifteen year old. Encouraging the reader to “get up, and get down, and get outside”, I frequently used it as a way to hype myself up when I’ve felt particularly bad or nervous about something, and it continues to be a personal favourite for its joy and celebration of everyday happiness.

Other songs move from self-loathing to resignation. Constantly on tour, Turner often talks about his inability to stay in one place, and thus put down any real roots. In ‘Jet Lag’, this is captured perfectly – a slow and melancholy piano melody is the backdrop to simple lyrics that capture his mood well. He’s not devastated, he’s not angry, he’s just okay, which he reminds us is “not the same as being happy”.

That’s one of the remarkable things about Turner’s music, which particularly applies to Love, Ire & Song. Although he has the occasional true love or heartbreak song, his power lies in the ability to translate into lyrics the mundane prickles of emotion that we all go through on a daily basis: the guilt that you’re too busy to spend quality time with your friends; the shame of realising you’re using sex as a coping mechanism; and the mixed emotions of realising you’re not the person your parents hoped you would be, but you’re happier for it.

One of the biggest reasons why I love Frank Turner’s music is because it has been able to uniquely translate emotions that I hadn’t even quite processed myself at the time of listening. As clichéd as it is, as a teenager growing up with lots of feelings, having them realised by someone else was reassuring. Although this is often in relation to the more simple emotions, it also extends to mental health. Turner has been and continues to be candid about his experiences with depression, as well as drug and alcohol addiction; helping to break down fears and stigma alike.

An honourable mention must be given to the first track , ’I Knew Prufrock Before He Got Famous’. Turner raises a toast to the ‘B-list’ careers of him and his friends: name dropping Dave Danger of The Holloways, and folk singer Jay ‘Beans on Toast’ McAllister. Despite it being for the most part a light-hearted song, he still came out with a line that struck me at the time, and continues to inspire my (somewhat impulsive) attitude to life: “Life is about love, last minutes and lost evenings,/About fire in our bellies and furtive little feelings, /And the aching amplitudes that set our needles all a-flickering, /And help us with remembering that the only thing that’s left to do is live.”

The most touching song of all lies three spots from the end of the album: ‘Long Live the Queen.’ A touching tribute to his friend Lex, who had recently passed away from cancer, Turner recalls a conversation they had before her death, where she told him: “now you’ll have to dance for the two of us”. Musically, it’s one of the most joyful songs on the album: rather than expressing grief, Turner celebrates Lex’s legacy in a way that captures the theme of the album, reminding the listener to embrace life and everything that it throws at you.

Muse ‘Will of The People’ Review : My expectations were low, and yet…