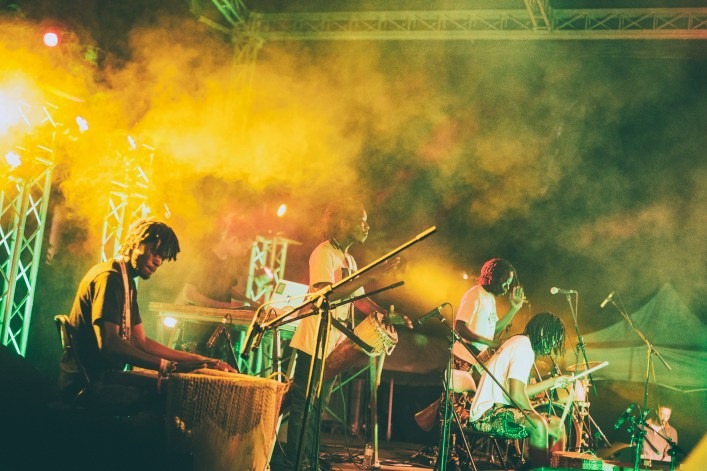 At its Southern extremities, the River Nile flows from Lake Victoria into the plains of Uganda as the Victoria Nile. The city of Jinja and its suburban extension, Njeru, sit on opposite banks of the nascent Victoria Nile as it begins its arterial pilgrimage to the Mediterranean. This stretch of the river is home to the Kakira Sugar Works, one of the largest in Eastern Africa, the headquarters of Nile Breweries Limited, who account for over half of the Ugandan beer market, and, every September, to quite possibly the most exciting underground music festival in the world.

For the past five years, Ugandan-based label Nyege Nyege Tapes have drawn together the best of East Africa’s up-and-coming musical talent, much of it from their own roster, with exciting names from as far as the UK, China, and Japan for a celebration of togetherness, freedom, and, as they put it, “non-stop party”. That might not be the most original of mission statements, but a spirit of independence and an immaculate ear have led Nyege Nyege Festival to quickly establish itself as one of the most essential of its kind.

Regularly gracing the bill are label success stories like Otim Alpha, whose dizzyingly glitched-out takes on the traditional wedding music of the Acholi people have led to European shows in Berlin and Barcelona, and the blistering punk-spattered bpm of Duke, flagbearer of an unforgiving Dar Es Salaam Singeli scene which has increasingly started to turn heads around the globe. Yet none quite embody Nyege Nyege’s collaborative international ethos, their juncture of heritage and bleeding edge, and their veneration of the live experience as aptly as Ugandan-British assemble Nihiloxica.

A collective venture, UK artists Spooky-J and pq first travelled to Uganda’s capital city, Kampala, in 2017 ahead of the year’s iteration of the festival. There they married their impeccable techno chops with the driving propulsion of traditional Bugandan drum circles as played by the Nilotika Cultural Ensemble, a troupe which “provides an outlet for the youth of Kampala, teaching spiritual, musical and tailoring practices to underprivileged communities around the city”. The yield is a match dredged up from the substrata of a stygian tar pit, slicked, muscular, and utterly gripping.

Nihiloxica’s self-titled debut EP, one of two to date, comes fully formed and unshrinkingly assured of itself from the opening deliberate drumbeats of ‘Nilo Chug’. Cymbals rattle. In the background, saw-like swells mount to a pitch and dissipate. When the song eventually ruptures into the complete force of its drum circle thump, swaying and intoxicating and martial, the potency of the fusion becomes fully apparent. The circle reaches new degrees of frenzy in ‘Choir Chops’’s give-and-take style duet of drums and tech, one assuming virtuoso priority before yielding to the other. The blow-by-blow alternation recalls a WWE tag team, but there’s nothing fake here. Yet it’s still when the two work in tandem that we have Nihiloxica at their turbulently brilliant best: of that ‘Endongo’’s delirious climax leaves us in no doubt. ‘Kadodi’ makes for a breathless ending, 5 relentless minutes of increasingly rabid drums exhibiting the full capabilities of the unaccompanied Nilotika Cultural Ensemble before we’re jolted out of the feverish darkness by the only human voice on the album: “Welcome back from the zone,” a man growls, yet you can’t help but wish that you’d never left it.

2019’s follow-up Biiri saw them rein in some of the mania in favour of a more pronounced techno influence; ‘Diggi Dagga’ is more overtly Detroit-esque than anything else they’ve made, and closer ‘Ding Dong’ is lent a horror-tinged claustrophobia by its squealing electronic spikes. The interaction of influences now feels less like a thrilling clash than an indivisible compound, the product of a group becoming increasingly single-minded and of months spent honing their collective vision on the road.

Their back-catalogue is yet to produce any misses, but that Nihiloxica is at its core an endeavour geared towards the performance context is stressed by the blurb to their first EP, which promises “a project designed for mayhem in the live environment”. You don’t need to see them onstage to know that mayhem is exactly what this music precipitates: that they were hand-picked by Aphex Twin to support him at his Printworks set is as ringing an endorsement as could be bestowed upon any act. Everything about their sound is visceral in the literal sense of the word, all-resounding and with a gutsy primal brawn that feels incomplete without an accompanying pit of grappling bodies.

With rumours of a debut LP arriving early this year, you can bet they’ll be heading out on the road again soon; whether you catch them in London or on the banks of the Nile, Nihiloxica are most emphatically not to be missed.