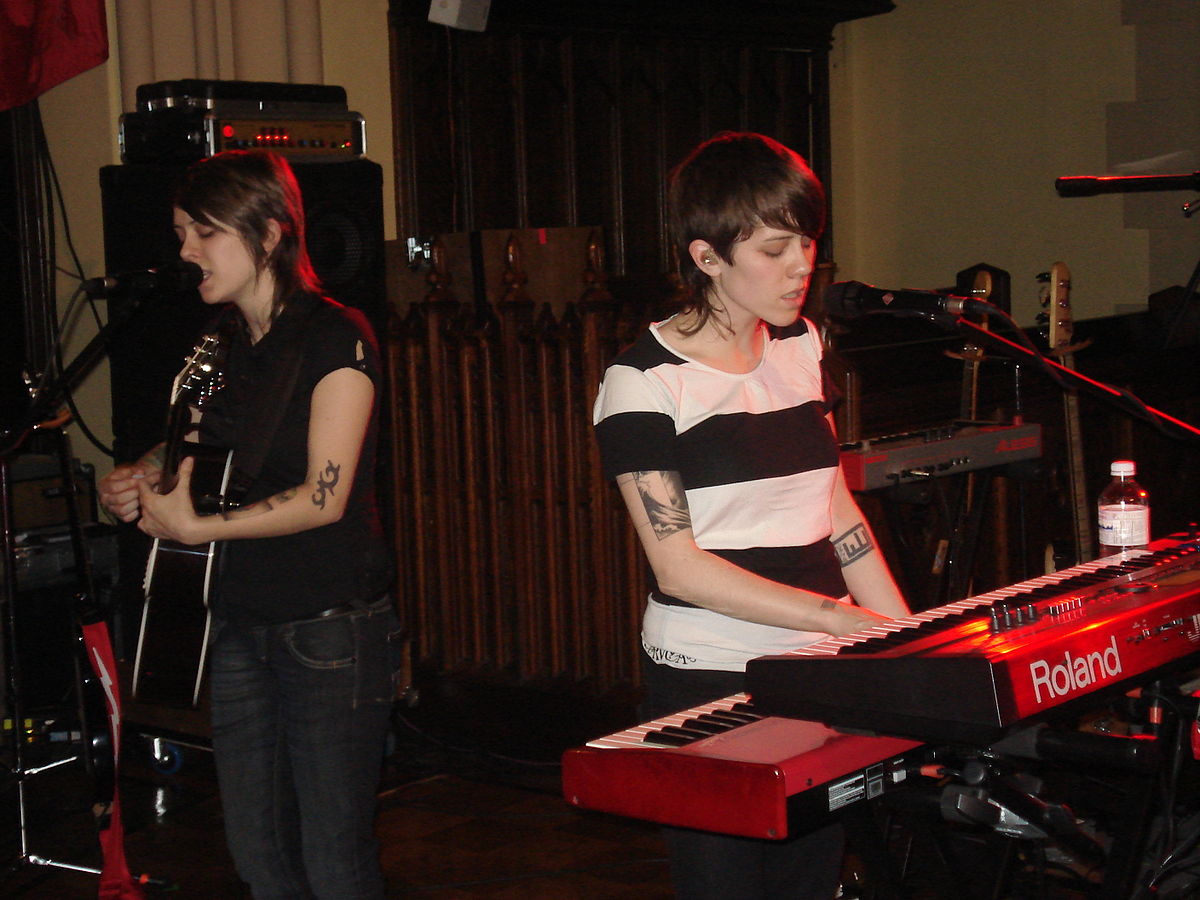 When Tegan and Sara Quin signed with Neil Young’s Vapor Records in 1999, they were a novelty on the male-dominated indie scene. The identical twins were openly gay, sporting buzzcuts and modelling their vocals on Nirvana and Smashing Pumpkins. Twenty years later, they’re so prominent in the LGBTQ+ community that listening to them has become a lesbian stereotype, along with wearing a plaid shirt and watching ‘The L Word’. Early on, they faced homophobia and misogyny from interviewers and critics, with Pitchfork describing them as “tampon rock”, and NME concluding, “They’re quite lovely, even if they do hate cock”.

Responding to such attempts to pigeonhole them, the duo has resisted categorisation. Over two decades, they’ve tried their hands at indie folk, rock, and synth pop. Heartthrob (2013) was a decisive departure from their acoustic routes and was followed by an onstage appearance with Taylor Swift to perform Top 40 hit ‘Closer’, as well as supporting Katy Perry on her North American tour back in 2014.

This move away from their indie roots was met with mixed reactions from fans. By this point, Tegan and Sara had acquired a significant queer following, and faced criticism for turning away from a marginalised audience in favour of mainstream acceptance. Tegan responded to accusations of ‘selling out’, saying, “what we were really doing was stepping up” and furthering the reach of their music for the good of the LGBTQ+ cause: mainstream success was a vital step for queer visibility.

Far from conforming to the traditional, heteronormative image of female popstars, they used their newfound platform to more explicitly affirm their queerness than ever before. Although never closeted, their earlier songs used gender neutral language, leaving it to their audience to find queer subtext. Love You To Death (2016), is, in contrast, undeniably queer. In the opening track, ‘Boyfriend’, Sara sings about a secret relationship with a woman who toys with her affections, singing, “You call me up, like you would your best friend/ You turn me on, like you would your boyfriend/ But I don’t wanna be your secret anymore”. The lyrics have been interpreted as a response to Katy Perry’s I Kissed A Girl, from the perspective of the girl used as a casual experiment.

In BWU, Sara declares “I don’t want a white wedding”, expressing disinterest in marriage, a powerful statement when assimilation into heteronormative institutions is often a requirement for respectability. The Quins campaigned for same sex marriage in the US, and Sara has expressed relief that she is now able to discuss her personal feelings on the institution without undermining the cause. In 2016, the duo launched The Tegan and Sara Foundation to campaign for “economic justice, health and representation for LGBTQ girls and women”. They offer grants to send children to LGBTQ summer camps, promote queer healthcare, and recently offered 20 scholarships to the Lesbians Who Tech initiative.

The duo’s latest project reflects their interest in representation for queer girls and women. In 2019, celebrating twenty years since their first album, Tegan and Sara released an album of songs originally written and recorded as demos while they were both teenagers (Hey I’m Just Like You). The record was advertised as a companion to their memoir Highschool, “A story of first loves and first songs”, in which the sisters alternate chapters, narrating the same memories of growing up down the hall from one another, but from wildly different perspectives. Sara’s account of falling in love with her best friend is paralleled with Tegan’s confusion at suddenly being barred from sleepovers. They write about learning to communicate with each other through LSD, and later through music, when they discovered that they’d both been writing songs in secret on their stepfather’s guitar.

Despite joking that they wrote a book to avoid producing a new record, Hey I’m Just Like You is more than a reconstructive exercise. Tegan and Sara have reworked acoustic tracks to incorporate influences from across their career. Grungy riffs give way to synth pop middle-eights, and ‘Don’t Believe the Things They Tell You (They Lie)’ fades out with an electric guitar solo. Lyrically, it is less complex than previous albums. Sara Quin in particular has gained a reputation for her cryptic, metaphorical writing. Hey, I’m Just Like You feels more literal, with lyrics steeped in teenage angst. Lines like “If I hold my breath until I die, I’ll be alright”, and “Hey I’m just like you/ a little messed up and blue”,  possess a whiny, adolescent, yet powerful quality.  The record is incredibly nostalgic, but with more polished sound production and vocals: Tegan and Sara have effectively revisited their youth through the lens of adults comfortable in their identity. Rawness is tempered by the clearly defined sound developed over the last two decades.

Given that the experiences of teenage girls are so often trivialised, it’s refreshing to see adolescent voices treated with such affection. The listening experience is enriched by the accompanying memoir, lending context to the tracks. On tour, they played stripped back arrangements of songs from various points in their career, interspersed with book readings, and home videos. Particularly poignant is a clip in which the twins are interviewed about ‘homosexuals’ for a high school project, long before either of them came out. The result is a rare queer coming of age story, casting light on the voices of teenage girls who could only express their experiences through music.