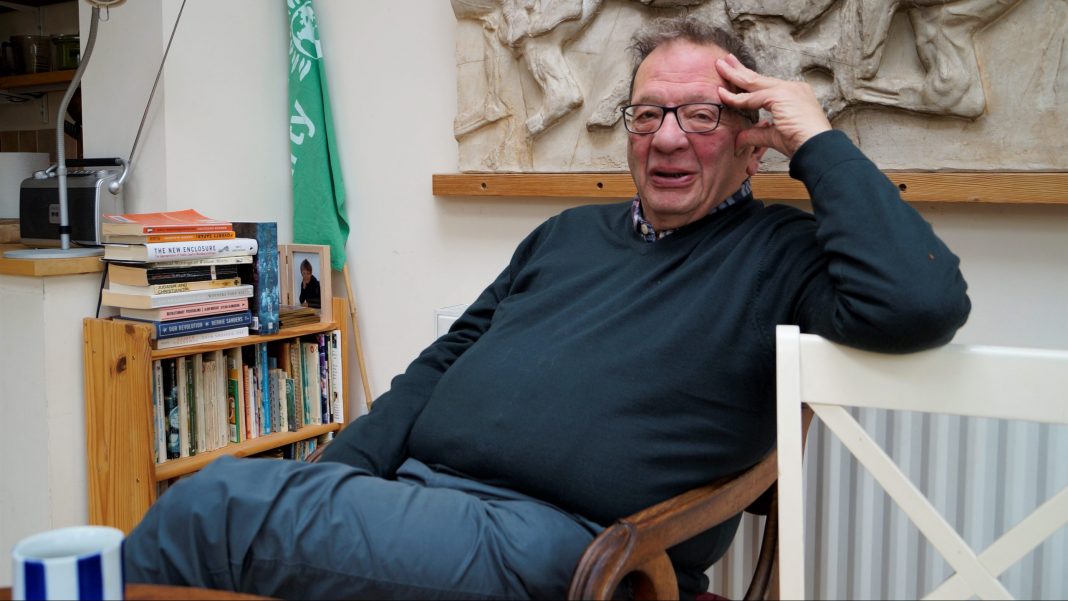 “Bernard was always rebellious, he loved his independent street life. Some people ask me if it was a tough upbringing. The answer is no,” said Larry.

He is the older brother of Bernie Sanders, the radical American presidential hopeful who is now head-to-head with Joe Biden in the fight for the Democratic nomination.

On a crisp January morning, before the primaries had begun, I met Larry in his brick-red home in Oxford. In his terraced house bordering on the natural reserve The Kidneys, he told me about growing up in New York of the 40s and 50s.

Across the kitchen table, Larry affectionately described a little brother who already from childhood was independent and principled.

“A certain kind of strength”

Their parents sometimes wanted to go visit relatives, which they both found quite boring.

While Larry was obedient and acquiesced, perhaps because he was the first child, Larry theorises, Bernard was “much more rebellious about it”. On such occasions, “this very fast kid” wouldn’t hesitate to leap and showcase his running ability. His opponent? “My father was heavy. Built like me; probably a little bit fatter,” Larry said.

“The sight of my father panting along in an impossible pursuit … Bernard could have kept going forever and outrun his father, but he didn’t have the nerve for that. Of course, when he did get in the car, he paid them back by getting sick,” he continued, smilingly shaking his head.

The independence and rebelliousness which characterised Bernard growing up is still very much present.

“Most people have a certain amount of independence. But it takes a certain kind of strength to be able to persist when everybody says you’re crazy,” Larry said.

If Bernie wins the Democratic nomination, that would make him the most radical candidate the party has elected in decades. There are many reasons why he turned out that way. But although they’ve always been close, also politically, Larry is dismissive of the notion that he exerted much influence on Bernard beyond what an older brother always does.

When asked about it, he laughingly replied: “Well, he says that I had. Usually, he puts it on page one of his books, then doesn’t mention me again.”

The story of Bernard and Larry begins with the Jewish immigration to New York in the 1880s and throughout the first world war. It was during this period their maternal grandparents left the antisemitism and pogroms of Russia and Poland for a better life in America. Their father, Eli Sanders, came to New York in 1921. Most of his family was later murdered during the Holocaust.

Like many other Jewish immigrants at time, he settled down in the radical borough of Brooklyn, where Larry and Bernard would grow up together. The inhabitants’ political convictions ran from “the far left to the left of the Democratic party”. There were people in the Communist Party – bolsheviks, mensheviks– and people in the Socialist Party and the Jewish Bund.

Larry spoke about why the Jewish immigrants’ views were so left-wing.

“They were recruited into the dirtiest most difficult jobs without any union protection without any government protection,” said Larry.

To illustrate, he pointed to the Triangle Shirtwaist Factory fire of 1911, in which 146 people, mainly Jewish women, died. The owners had locked the doors to prevent them from stealing and taking unauthorised breaks.

“So that’s what they faced. But they also faced, for the first time, a system with some room for political operation. Some political freedom,” Larry said.

“And they made use of that.”

The independent upbringing and the radical milieu they belonged to don’t provide the full explanation of the brothers’ political views. Larry believes their father’s early passing was particularly significant.

“My father died from the effects of smoking, long after the tobacco companies knew that they were killing people, and I think a deep sense that I have, and that Bernard has, is that the profit motive, which may work well sometimes, is also very desperately damaging,” he said, drawing parallels to today’s fossil fuel industry.

The two brothers also saw what happened when other objectives guided political decisions. Larry described their family as belonging to the “lower middle class” when the brothers were born. His father was a paint salesman and his mother was a housewife, which, as a side note, Larry thinks “probably was a pity for her”.

Although their apartment was overcrowded, it was, thanks to new tenement laws, “warm and well-kept”. It was also affordable, thanks to rent control.

Additionally, Larry and Bernard saw a “mini welfare state” emerging. This was, said Larry, one of “two great characteristics” of New York Democratic politics at the time. The other was corruption: “Buying and selling votes, stealing, pulling votes out of ballot boxes, things like that,” he said.

Larry continued: “A lot of the welfare initiatives were damaged by corruption, of course. They had a very expensive hospital which, from what I gather, functioned badly because of corruption and people stealing money all the time. But one of the more creative elements, the City University of New York, which I went to, I went to Brooklyn College, was extremely good.”

Bernard, too, went to Brooklyn College for a year. But over the period when he studied there, their mother was very ill. He and Larry were mostly in the hospital with her, and when she died towards the end of the year, Bernard just wanted to get away. “He couldn’t really bare to stay on,” Larry said.

Bernard left Brooklyn for the University of Chicago, which at that time was located in what Larry would describe as “a black slum”. He didn’t spend much time in classes there either.

Instead, he was busy politicking and was active in Young People’s Socialist League. But it was in the civil rights movement that his independence and clarity of conviction was put on the greatest display. A sit-in he organised, one of the first ones in the North, successfully pressured the university to desegregate its student accommodation.

Chicago marked the beginning of a long political career. He has been Mayor, and is today senator. Larry doesn’t rule out that some strategy might have been involved when his brother’s campaign posters at some point went from Bernard to Bernie.

Larry, himself, immigrated to the United Kingdom in 1968. He’s now, at the age of 84, health spokesperson for the Green Party, which he joined when he found that Labour had become too right-wing under Tony Blair’s leadership. It’s from his home base in Oxford, where he has been a student, lecturer, and councilor, that he is now campaigning for Bernie.

The millions of American Democrats who live abroad can choose whether they would like to vote in their home state or in the Global Primary organised by Democrats Abroad. I 2016, about 35 000 people opted for the latter.

“That’s hardly anybody. So we do advise people to vote in the Democrats Abroad primary because their vote counts more than in most states,” said Larry.

The Democratic Global Primary runs until Tuesday, March 10. Same-day voter registration is possible at www.democratsabroad.org, and voters may cast their ballot via email or at Jesus College on Saturday.

Since our interview, Larry has been on a two-week tour which started in London, continued north to Scotland and south again to Paris in an effort to amass support for his brother. He campaigned in the 2016 Global Primary, too, where Bernie wound up with 68,79 percent of the international vote. But domestically he didn’t do well enough, and at the Democratic National Convention four years ago, a choked-up Larry cast his vote for his brother in an election that was already lost.

This time he wants it to be different. The policies, with public healthcare, a green new deal, increased minimum wage, and free tuition, Larry described as just “obvious and commonsensical to most people”.

One thing he hopes, is that Bernie and Elizabeth Warren, who dropped out of the race on Thursday, soon will find a way to work together, increasing the chances of victory. “It was quite obviously with intention Bernard’s team leaked that they’d inquired whether it would be constitutionally permissible for the same person to be Vice President and a member of the cabinet,” Larry said, with clear reference to a potential role for Warren in a Sanders administration.

“What I see in Bernard is a unique candidate. He’s drenched in the class struggle idea, and at the same time he says that you should fight for other people as hard as you fight for yourself. It’s not common to see those two ideas put together like that,” he said.

Larry spoke of his brother’s anti-imperialism, his views on Israel and Palestine, and his conviction that, even though it is useful, winning the election is not the sufficient. “You need to have lots of people who feel that this is their struggle,” Larry continued.

He concluded: “I think putting all that together, he really is more significant, more different than I, and I think most people, gave him credit for. So his success would be even more startling, more good.”