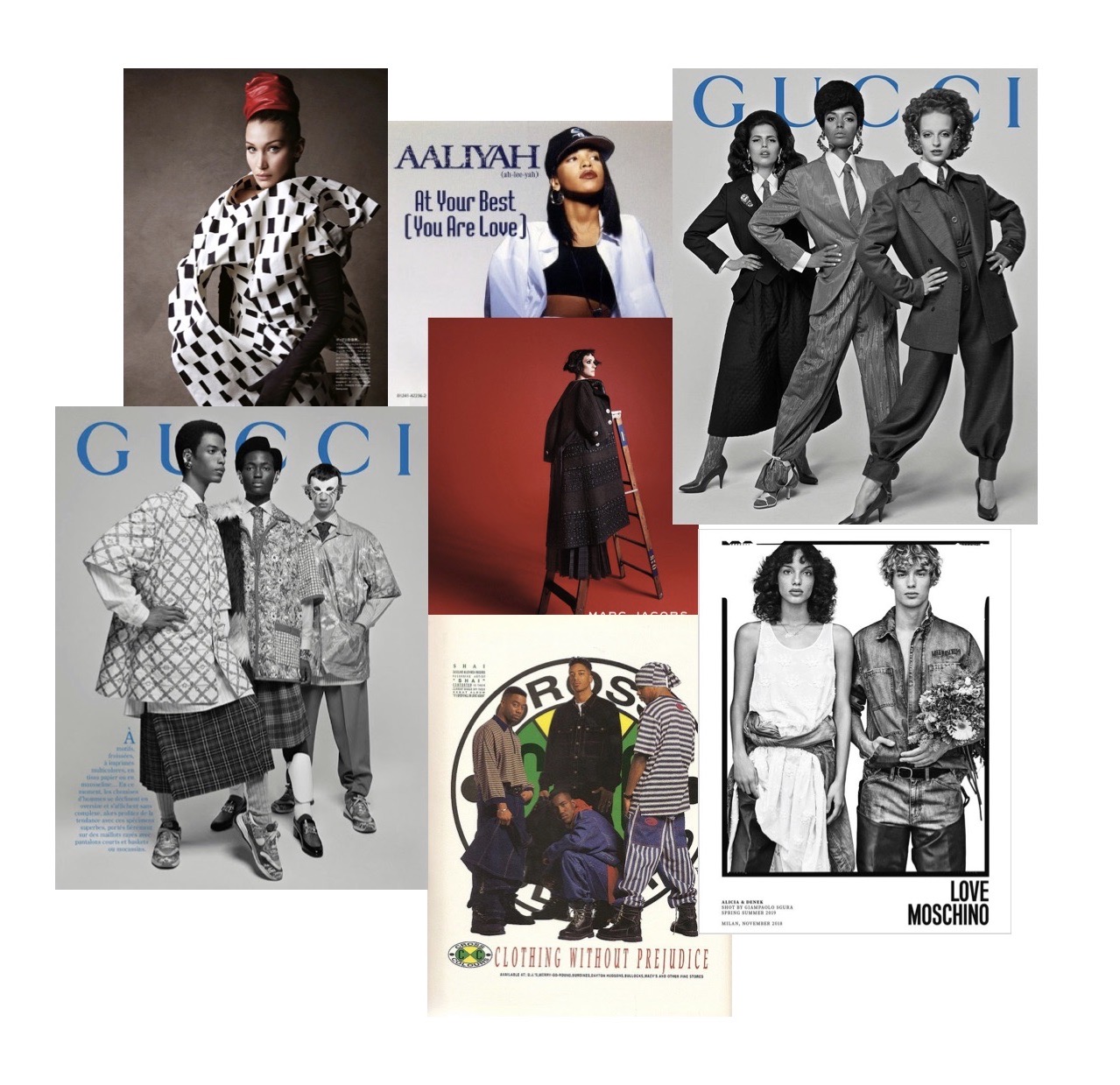 Reaching the ripe age of 21 hasn’t stopped me from looking for ways to feel young. Thinking back to dress up with mama’s clothes and sliding my size 13 feet into the toes of her shoes made me want to feel small and comforted, to go back to a world where I didn’t have such an unendingly busy life. It’s days like this where a jumper whose sleeves hang over my hands the way my mum’s dresses swallowed me up is truly a tonic- it’s the sweet feeling of being swaddled at a time where the outer world feels a lot to face alone.

Since I can remember, I’ve had a complicated relationship with occupying a physical form in a world where there is a ‘right’ and ‘wrong’ way to do that. Oversized clothes shift that public worry of what works for your body shape first and clothes second, by presenting a fashionable way for the contours of your body to be virtually indistinguishable from the layers and folds of fabric. It’s also, to a degree, more inclusive- with modest fashion on the rise, trends are now more open to people whose cultural or religious dress conventions might often contrast with popular styles. However, fashion is profoundly personal, and I’d hate myself if I accidentally propounded the 2009 not-like-the-other-girls, “she wears short skirts I wear t-shirts”, Taylor Swift rhetoric of placing a social prize on the retention of a coy female modesty- I prefer the idea that choice is meant to liberate! Liberation for me just happens to be my clothing functioning as a spare bedroom.

Central to any discussion of oversized fashion today is the roots from which its modern incarnation sprung- early hip hop culture in the 1980s and 90s. From MC Hammers’ blouse trousers letting him Hammer time unencumbered by the restraints of the common pantaloon, to Aaaliyah’s baggy trousers and oversized jackets (which sometimes flaunted her femininity by drawing attention to her waist), to Queen Latifah’s big tees and hoodies in the iconic U.N.I.T.Y video – not to mention the fashion of the most culturally significant acronyms NWA and TLC. These all point to hip hop culture (which both influenced and was influenced by Chicano culture) as a vital root for today’s oversized trends. Recognition of Cross Colours in particular (the first streetwear brand and hip-hop movement) who used their clothing to voice political and social issues faced by African American communities, is vital when appreciating Cross Colours cultural hallmark of how politics is embedded in fashion, down to the very stitch. It’s this oversized clothing trend, which has been recently remoulded into high-fashion palatable for the white and middle class, that has previously seen countless ethnic minorities profiled and, in many cases, worse, because of conventions surrounding their dress.

It’s easy to see how we can use our bodies’ as canvases for the exploration of politics, gender, form, and shape through what we choose to sport- whether the clothes obscure or reveal us. Rei Kawakubo, founder of Comme des Garcons, attaches particular importance to the void and the abstract, focusing on space and nothingness in creating clothes with and without shape- emphasising the value of absence and the glory of shapes and protrusions that serve to reconsider and reinvent the human form in a way that maximises its potential, rather than keeping within conventional moulds. Successful baggy clothing doesn’t have to be confined to designer labels, as one can, through the dimension, depth, and manipulation of form in the drapes and folds of pretty much any oversized garment make – in my eyes – an opulent, gorgeous, and unapologetically abundant creation.

The liberative qualities of oversized clothing have also historically (and presently) meant freedom from the prescribed feminine silhouette. From the famous 1920s lean n mean, gamine flapper dresses to the Annie Halls of the 1970s, tailoring has been used to convey a message of female empowerment, subversion, rejection of the past, or even just a rearrangement of priorities (bringing motion over poise, for example). However, there’s a paradox begging to be addressed. Historically, female empowerment by fashionable means has often relied on a concealment of ‘femininity’ in order for one to be regarded as having authority or reason. These days, though, what I like about oversized fashion is that through unisex clothing brands like Collusion, the idea of a gender binary is comparably void. Playing with shape and form without having to adhere to gendered silhouettes is arguably more comfortable in this arena. There’s a huge case to be made for oversized fashion concerning body image, gender conformity and freedom of choice for many, being a huge plus.

This is not a command for everyone to wear oversized clothing- I say this is a persistent problem concerning fashion. It is the policing of what plus size people can and can’t wear, based on what is most ‘pleasing’ to a public gaze fed by flat tummy teas and fad diets. In an ideal world, clothes wouldn’t be used to hide, but to celebrate- both the clothes and the body. Bottom line is (however shocking it may be): people should be able to wear whatever they want. The ways that fabric clings to it, hangs from it, moves with it- whether it is draped in velvet or barely covered by a whispery mesh, the body and its clothes are simply magical.