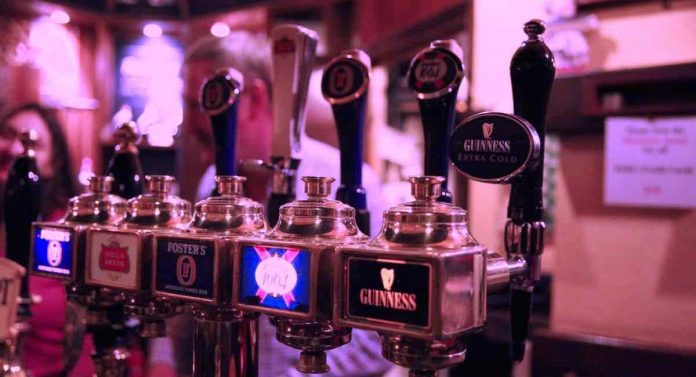 ‘I’d rather be doing anything, anything than this shit’, falls out between hysterical bouts of sobs – my Mum didn’t sign up for this. Sat across the kitchen is a shell of a 17-year-old – clad in a densely-woven, pillar box red polo shirt, smelling, or rather reeking, of roast beef. The thick polyester material of her uniform (I use this term in its loosest meaning) retains such a delicious musk even after multiple washes, and also adds a flattering 2 stone to her form. She’s a waitress, fresh out of a Christmas shift.

During the Cerullos’ state-issued daily dog walk the other day, we happen to pass the greasy palace itself. I turn to my brother­ – and former pot-washing colleague – and ask, ‘how many hours on end would you work in there to get rid of lockdown?’ He pauses, casts his eyes to the middle distance as if to recall a long-suppressed memory, and shivers: ‘we’re not at that point yet.’ ‘Yeah, you’re right. Never again’. Surely these can’t be the words of a couple of young adults who had the joys of working in their picturesque local pub, an intrinsic part of a blissfully pastoral Somerset adolescence?

Don’t get me wrong, I too was fooled by the mysterious lure of ‘the waitress’. They were something to be revered, so nonchalant despite taking stage as the magicians of any meal out I’d ever had. I was commanded by their presence, fascinated by their elegance and ease in commanding a table of 30 in an instant. My cousin had been one, even Graham Norton had been one (I distinctly remember the advice he gave to teens on his Radio 2 show, that ‘everyone should work in service’). My 14-year-old self, CV trembling in hand that brisk autumn morning five years ago, couldn’t wait to join them.

In hindsight, I should’ve smelt something fishy­ – or rather, beefy – upon entering such an establishment. There’s a beautiful metaphor in my CV getting stained with honey-roasted peanut dust and Otter as I passed it nervously over the bar. My future boss barely cast her eyes over the envelope, which, if she had opened it, contained a perfectly-penned smattering of A* predicted GCSE grades and ‘work experience’ as House Languages Captain. Instead she simply fixed her narrowed eyes upon my eyebrowless, frizzy-haired form. In manner of some ale-brewing, cod-frying Yoda, she cackled through a missing tooth, ‘bit shy. I’m gonna work you ‘ard mind you!’ Was this a job offer? ‘Great, oh that’s great, wonderful, oh thank you so much.’ I might have curtseyed on my way out.

I felt a bit of a legend swanning into registration the next morning at school, dropping in the odd bit of career-girl jargon: ‘shift’, ‘pay’, ‘National Insurance Number’, ‘leave’, ‘tax’, ‘apron’ etc. In retrospect I was a bit of a prick about it: ‘Yeah, no Toby’s party sounds really fun but I just need to check I’m not WORKING.’ Yes, the uniform was disgusting, the legality of wage distribution questionable, but that didn’t matter to me.

My first shift was the sweatiest, busiest, most stressful 5 hours of my life. To say I was thrown in at the deep end was an understatement; ‘service’ seemed to make monsters of every member of staff in that place: screaming, throwing and swearing (‘If they don’t think that’s medium rare they can shove it up their fucking arse’) echoed throughout the kitchen, and also the surrounding tables; a woman stopped my crimson, sweating, frizzy form at one point and asked, ‘are you alright?’. Nothing worse than a waitress who can’t handle the heat of the kitchen. I had majorly underestimated this whole charade.

I began to understand Pegg’s chosen setting for Shaun of the Dead. But I’m not a quitter, and at the time was a bit too proud; when asked at school how it was going, I simply replied, ‘Yeah no really good, we’re actually coming up to the Festive Season which is really exciting because we’ve got a new menu.’  Unlike school, the life of the waitress was not something I could intellectualise from the depths of my shy character. In some ways I’m grateful to my waitressing experience: the late shifts, endless weekends spent smelling of batter have provided me with some excellent formal chat fodder. A particular favourite amongst friends has to be ‘The Cheesecake Incident’: a girl is 4 hours deep into an extremely busy shift and is therefore in autopilot customer-is-always-right-do-anything-and-everything-for-the-customer-mode. She cuts a piece of cheesecake that as soon as knife touches pud she knows will be too flimsy, too small. She leaves the kitchen– there’s no turning back. As she moves through the air – an odd but specific posture, a bit like you’re taking a shit, is required to keep the plates you’re carrying steady – the cheesecake wobbles, beginning then refraining to succumb to the wind created by its master’s swift motion through the restaurant. ‘Who ordered the cheesecake?’ The man who claims it is helpfully placed next to the fire; as the waitress’ arse begins to gently bake she lowers the cheesecake to the table, yet as she does, it beautifully topples into the man’s lap, in the manner of a trapeze artist at the Cirque de Soleil. In super-helpful-handy autopilot, she immediately goes to fish the cheesecake from the man’s crotch. ‘It’s alright’, he says, ‘I think I’ve got that.’ It looks like I’m trying to feel him up. Instead of tossing a customer off mid-shift I draw back my hands, muffling a sentence together which reassembles ‘I’ll just go get… another slice of that one… and a napkin so you can… clean up that cheese… on your lap.’ Really well played.

I could recall countless others– the lovely Adam, who, addressing each waitress by their breasts, would plonk himself at the bar every day and drink a bottle of wine as he watched the shift play out, akin to a twatted Chaucer in The Canterbury Tales. There was the time I got a 25p tip from a table of 40 who stayed until 2am (we closed at 12); the time a woman popped a dirty nappy along with the waste contents of her handbag (train tickets, tissues, an old mascara etc.) into her empty desert dish – upon finding the custard (and perhaps faeces)-smeared train tickets, my people-pleasing-16 year old wiped them down and ran out after the customer only to be laughed at: ‘Oh, those were meant for the bin!’

Despite this, my career as a waitress has spanned 5 years and counting. I agree with Graham– I do think everyone should work in service at some point. As odd as it might sound, I valued by boss’ indifference to my academic pursuits – for her, getting Table 6 their starters on time was just as important as one of her staff members leaving early for an Oxford interview. Waitressing has allowed me to put the stress I might feel into perspective; trying to remember 5 different orders whilst pulling pints and maintaining some sort of conversation with the person you’re serving demands a certain mindfulness. I’ve grown to love talking to everyone and anyone; the witty balls needed to assert yourself in a loud kitchen has formed the basis of my chat, far from the bag of nerves which entered those doors all those years ago.

I suppose this is a love letter to the pub, in all its greasy, frantic glory. Much like school can’t teach you the things that working in service can, the peculiar magic of Oxford lies just as much in the relationships it fosters as its stony, bookish physicality. I’ll take as much from my academic pursuits at this university as I will from the memories made over a cold pint.