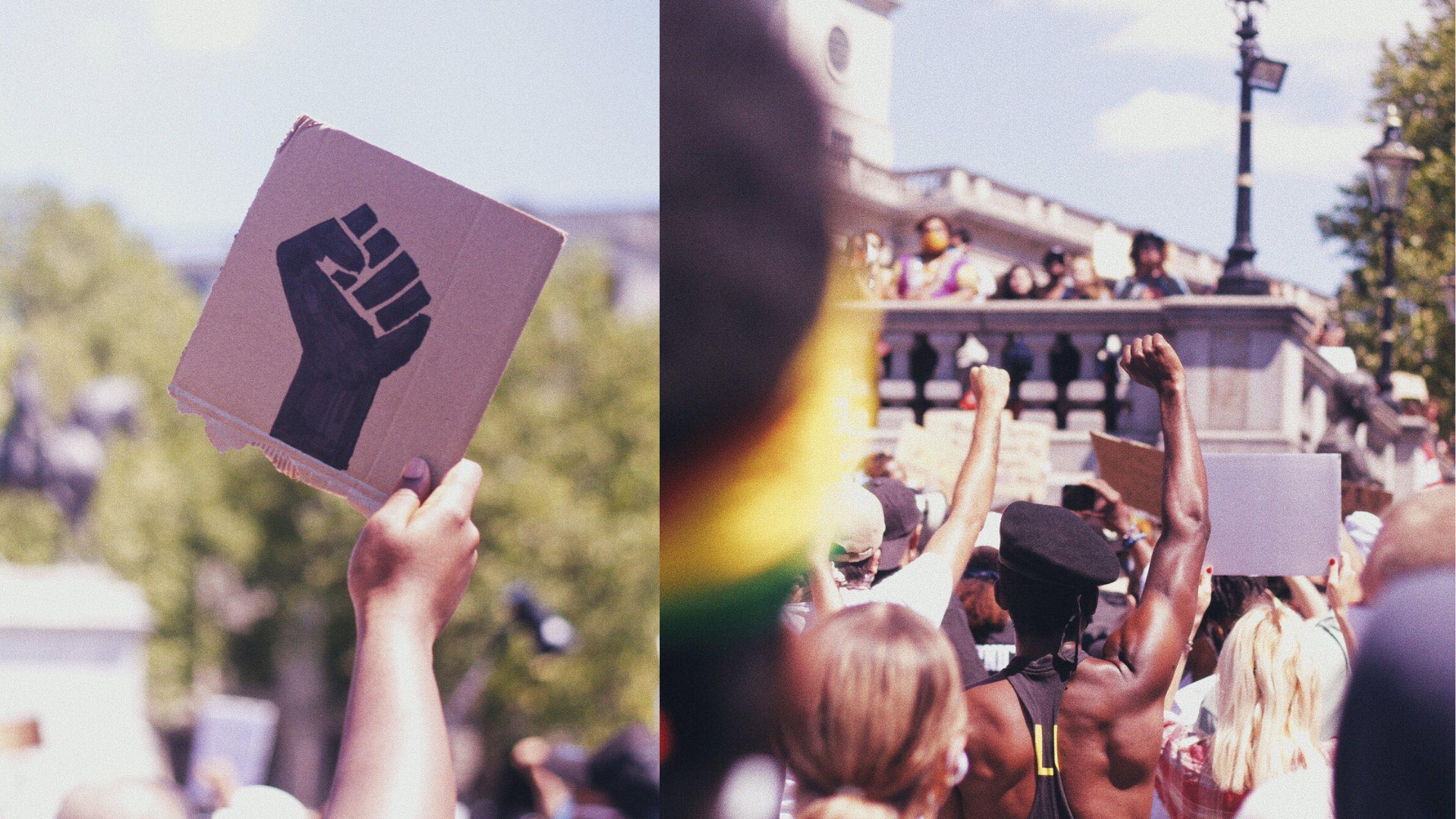 The early 19th century saw the introduction of minstrel shows and their quick and steady spread across the United States and Britain. Minstrel shows consisted of ridiculing black people with comedic intent, as white men wore blackface in the name of performance. They lampooned black people, ridiculing them in order to ensure black people were still, and forever would be, chained. Chained to the mangling stereotypes that live on today as a means of reminding the privileged people of America, and indeed the world, that these ‘animals’ were nothing more than a joke. These ‘jokes’ and ‘games’ were nothing more than performance in the name of art and humour with a clear goal: to perpetuate the notions of an oppressive system that to this day claims the lives of the innocent.

The early 21st century sees the weight of racism, like Sisyphus’ infinitely rolling stone, claim even more black lives. On May 25, 2020, white police officer Derek Chauvin murdered George Floyd, an innocent black man over a ‘false cheque’. Shortly after this horror, Toronto police pushed Regis Korchinski-Paquet, a 29-year-old gymnast, off her balcony to her all-too-soon death. On February 23, 2020, Ahmaud Marquez Arbery, another unarmed, 25-year-old African-American man, was lynched via gunshots by two white men as he was jogging. On April 22 1993, 18-year-old Stephen Lawrence was fatally stabbed as he waited for the bus. The list of victims of modern-day lynching is infinite and continues to claim lives like a perpetual plague.

Whilst these occurrences are only some of the ones most recently brought to light, they do not stand as isolated events. The history of the world and the society that we inhabit today is built off the contributions of black people and the anti-blackness that imprisons us daily. Denying it, like the history books and the curriculums choose to do, will not eliminate the truth, that for some reason, so many non-black people are terrified of admitting they possess and benefit from privilege. And with this privilege comes performance.

As the Minneapolis rebellion takes action and highlights to the world the crimes condoned by the system, and the injustices are replayed time and time again, a wave of performance in the name of ‘solidarity’ surges with greater force than the fires across the Minnesotan city ever could. The Internet is flooded with messages and posts of apparent unity and respect towards black people. Some have been genuinely supportive, helping to amplify the situation and gain significant donations to relevant charities. But while most, at surface-level, seem supportive and genuine in their intentions, the same cannot be said for all the messages.

An example is that of influencer Nikita Dragun. In a recent tweet she seemed to be extending an arm out to black people, a supporting sister in all of these troubles. And yet, even the lightest of digging exposed that her support and heart are as shallow as a paddling pool. Not only is she known to maintain and monetise anti-black sentiment as a ‘culture vulture’ through using natural protective hairstyles and questionable foundation shade choices, but her tweet demonstrated what we already knew: the clout is bigger than the lives and that POC/minority solidarity isn’t real. Her badly copied and pasted tweet – a half-assed attempt to stand up – left more than just a sour taste in my mouth. Not only was the message patronising and a load of over-complicated and artistic fumble and mumble with no real meaning (“I’m not black but I support you”…what am I supposed to do with that?), but Dragun couldn’t even bring herself to copy the whole message leaving a whole chunk of it out. How brave of her to stand up and ‘speak for those who don’t have a voice’, putting her entire Internet career at risk when black people are only being abused, unjustly incarcerated, and murdered day in and day out.

This is, unfortunately, a shared attitude across non-black people and their actions during this. As black people deal with the bricks of trauma which experiencing situations like this brings, they are also the only pioneers of real help and solidarity throughout all of this. They have the facts, the links, the instructions and tips for keeping safe during protests and the contacts to charities and organisations working to lighten the load. And what about our Fake Woke folk who proclaim justice via one silent ‘Like’? They are just that: silent. A deafening silence that reminds us of what they believe to be worth talking about. Black people are just not worth the effort, it seems, until it circulates and is being forced into everyone’s faces.

These are the people that stay quiet or prefer to log out because they’re “uncomfy” when someone says the N word (that someone often being themselves), or when a teacher makes a racist remark as a ‘joke’. These are the ‘siblings’ that will not speak back to their colourist families and the derogatory words they use to refer to black people, or the type of people who will accept Doja Cat because she is a tolerable or acceptable type of black person – not too black, not too loud, not too angry. These are the people that will take the true, well-meaning initiatives of POC and claim them as their own for their own drops of performative glory (I promise you are not as subtle as you think you are). These are the people who claim to campaign for real social reform and justice but choose to reflect an ‘apolitical’ stance so as to not get so involved in the issue and to protect themselves from the labours of carrying black troubles with them.

Even worse are the people who post on social media when black deaths go viral but will make no active effort to apply deep introspection and re-evaluate their privilege and how to use it for good. This is a privilege many cannot afford and frankly, I do not blame you from choosing the easy route. If George Floyd could’ve chosen, I think he too would have preferred an easier way. Nevertheless, choosing to be ‘apolitical’ is a political choice and a vile one at that. With every breath in your lungs you are saying that you consciously side with the oppressor and the perpetrators of these abuses and, simply, that you are perpetuating and actively benefiting from racism.

But some silences are more troubling than others. We’ve reached a point where ignorance and lack of empathy from certain demographics can be rationalised or merely brushed off. However, when the performative activism of the groups that we feel we are part of – friends and people that we trust care for our lives as black people- is unmasked, the fact that they simply do not care is not only evident and irrefutable, but deeply disheartening.

Black people are and do everything like you, and yet, we are nothing to you. Having said that, why should it matter whether you can relate to a black person? Is your sense of humanity so weak and shallow that it can only blanket those that you feel you can directly understand? Are you so apathetic to other people that as soon as they are beyond the bounds of your immediate circle of interests or similarities, they cease to be humans with deserving lives? Are you so pitiable that you justify your picking and choosing of which lives are worth your efforts and your interest? When did the need to spread and gawk at a traumatic video of brutal murder (that is not only dehumanising and disrespectful, but simply cruel for everyone involved) become the only, and somehow acceptable, way of eliciting empathy? How can you call for liberation and justice when you turn a blind eye as to contribute and uphold the pillars of racism in all systems of society? Does your performance not extend that far?

Despite all of this, black people are somehow meant to peacefully and quietly unpack the centuries of trauma that situations like these make us relive whilst enacting our own type of performance. We are made to perform for the Internet, for the political leaders and for everyone involved who won’t even bother to watch. It has become a routine job for black people to pick apart, explain and describe each and every little detail of this trauma in order to be heard; to put on a play for those who refuse to educate themselves on the matter as if Mr. Google isn’t a powerful enough tool. It’s almost as though some people enjoy seeing black people suffering and unpacking like this. As if the shock factor is thrilling more than it is terrifying.

Do not forget that black people do not owe you anything – not in these times or in any time. It should not be the duty of your black peers to educate you on what decent humanity for non-black people should be. It should not be our duty to replay our greatest fears for you because you refuse to see beyond your Fake Woke agenda. Nonetheless, every day it seems that this is the only tool we have left. You, non-black people, should be the ones taking the reins to protect the black people around you.

Do not forget that during these times your black peers are living with an indescribable amount of terror for themselves and for their loved ones. They live in the fear that one breath too loud could make it their last. Do not forget that black people deserve your genuine solidarity and respect and that it is important that this support extends beyond this immediate shock.

Be as loud and as angry when a little black girl is told her hair is unacceptable, or when black trans women, the most vulnerable minority group in the world, are attacked and murdered at disproportionate rates. Be just as vocal and true to us when young black men are denied access to places, events, and the working world. When talented students are disregarded or told they only reach academic peaks for the sake of a quota. When undercover cops cause chaos and young black people are run over and killed for it. How the media’s presentation of all of this, much like the minstrels, serves to show a damaging image, a ridiculed and violent form that fuels the anti-black fires.

No one is as hated or as disregarded as black people. Time and time again we are reminded, in both microaggressions and overt violence, that we aren’t considered worthy enough to live as equals. Anti-blackness is rife within white communities as well as Asian, Arab and Latinx ones. Blackness is relegated to the bottom of hierarchies of desirability and even humanity. And yet, you thrive off of our labour, our thoughts, our art, our cultures and our sweat. It takes real action and violence to be heard; no twisted, self-centred or ignorant myth that you wish to use to convince yourself otherwise will justify your inaction.

It is simple: black people are vulnerable, and anti-blackness is an all-consuming and fatal pandemic.