Alan Bennett’s acclaimed 1991 exploration of George III’s first bout of mental illness and the constitutional crisis it triggered is reborn in this National Theatre and Nottingham Playhouse collaboration. Bennett’s masterpiece portrays a narrative of contradictions and hypocrisy: George III’s treatment at the hands of his doctors having declared Britain’s abhorrence to torture is followed swiftly and painfully by George’s pomp and majesty being reduced to drivelling incoherence and utter desperation. Once again, Bennett has presented us with a seemingly light-hearted foray into British monarchical history which he swiftly undercuts with a sharp and violently truthful exploration into mental health, madness and the problems thereof in its treatment, its reception and its presence within us all.

Mark Gatiss, as George III, takes the stage by storm – not only filling his role but spilling over and enveloping the audience within his own desperate personal struggle. The play opens with the shout of a page and the rolling out of a red carpet to allow the stately and triumphant Gatiss to take centre stage which he does immediately. Throughout, Gatiss portrays the king as a complicated figure desiring care, even in his initial haughtiness there is a loveable nature to him. The ‘what-what’s and reference to himself as ‘Farmer George’ imbue us, as he did his public in the late 18th century, with a cheerful fondness. This remains throughout his descent into pain and confusion. Your heart lurches to watch the powerful and stately king stutter and stammer, his physical ticks, his sharp head twitches, just as obvious as his stumbling over words. His cries against any more are blistering, visceral and uncomfortable. Gatiss truly portrays a man brought to his knees by the lack of understanding or compassion by those and the world that surrounded him.

His quacks are excellently portrayed by amongst others Louise Jameson, comically presenting us with the most ‘cutting edge’ of medical practices and providing some light-hearted and welcome relief. But (as always) Bennett’s humour is shadowed by his more serious message; madness was not and is still not fully understood. Bennett also delves into ideas of indulgence and pandering which are not quite put to bed by the introduction of the magnificent Adrian Scarborough as the domineering Dr Willis whose torture seemingly saves the day. Scarborough oscillates between authoritarianism and malleability at the hands of the politicking around him which all bear down on the king, his doctors and his retainers. The supporting cast are wonderful in their own right. The set serves to underline the gap between sanity and madness, public and privacy, submission and rule. George’s throne is echoed with his restraining chair, sat upon a dais, leather straps on full display. The King’s later performance of King Lear almost comically underlines this relationship but in such a way as to bring tears to your eyes and make your heart ache. The political intrigues continuing amongst the screams of pain seem immaterial and inconsequential compared to Gatiss’ portrayal of George. It helps to underline the sniping culture and selfish aims of those in office. Something that perhaps can be seen in today’s leadership in a world turned quite mad.

The Madness of George III is magnificent and, with Gatiss at the helm, a triumph of the stage which is well worth the watch if you can bear the pain of watching a man’s descent at the hands of those who can only be described as the clowns of this tragedy.  To have waited so long for a resurrection seems criminal but a resurrection without Gatiss and the rest of the cast would have been utterly abominable.

The Madness of George III from NT Live and the Nottingham Playhouse is available on YouTube until 18/6/20. 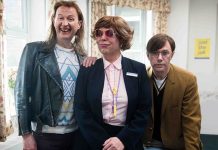