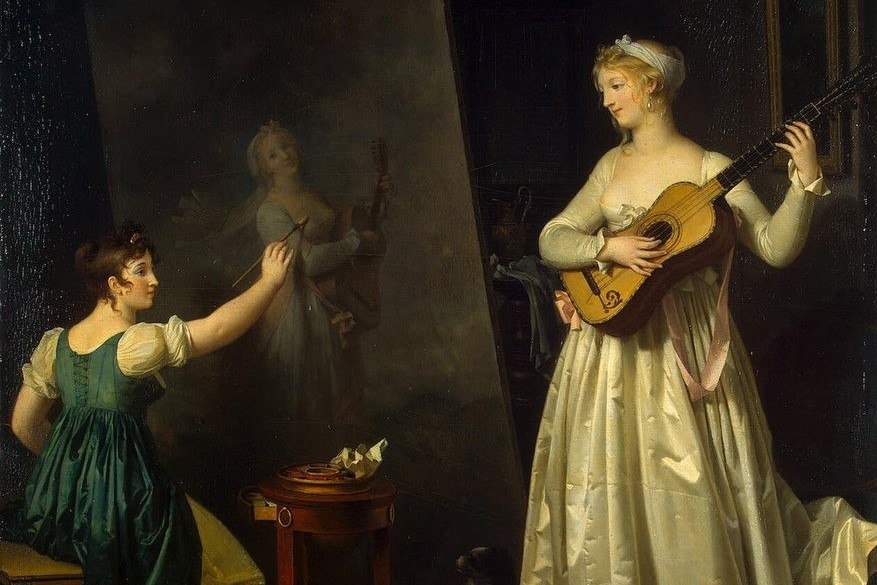 Kate Winslet catches Saoirse Ronan’s eye in the mirror, watching in the light of an oil lamp as she takes her corset off. Later, Ronan looks down at their held hands, petticoat layers concealing their secret. They kiss in an empty courtyard, cheeks flushing, a stolen moment of romance.

These scenes are from the recently released trailer for Ammonite, one of a wealth of lesbian period dramas that have suddenly occupied our screens. From Portrait of a Lady on Fire to The Favourite, filmmakers have discovered a formula that garners both critical acclaim and mainstream reverence, and are keen to make the most of its success. (The latter, for instance, was nominated for ten Oscars, five Golden Globes, won seven BAFTAs, and grossed $95 million at the box office.)

Set in the 18th-19th century, these period films usually follow the love story of two women, roaming the English countryside, the coast or the grounds of an expansive castle. Amidst the luscious backdrops and swathes of silk used for each costume, the dark days of women pillow-fighting for the straight man’s satisfaction seem miles away. After years of shunning and over-sexualisation in films, lesbians are at long last seeing their names in big, shining lights.

At first glance, this development seems only good news. The sapphic community has begged for on-screen representation for decades – studies show that only 18.2% of films from major studios and 28% of TV shows have LGBTQ representation. Even on the rare occasion they do exist, lesbian films are both in the minority here and typically sold based on their supposed “sex appeal”. The cliché lesbian film piles prejudice on top of prejudice on top of “hot girl-on-girl action!”, exasperating oppressive stereotypes. Exploring the romances between women in the past then, whether fictional or historical accounts, allows for the unearthing of an often forgotten or erased truth: a woman’s love for other women is in no way new or strange. This is a fact many need to feel reinforced. Women who are attracted to women have always existed: there have been generations and generations of women just like us, who have loved and been loved just like us.

The retelling of lesbian history through these films is undoubtedly a victory for the LGBTQ community – but as with any victory, there are some casualties. While plenty of antiquated tales have been re-established, significantly fewer contemporary lesbian love stories have gained traction in popular culture. Lesbians exist, but only, it seems, if they have no access to electricity or are burdened by the weight of a crown on their head. While these period dramas have certainly made a start in the right direction, a group as diverse as the LGBTQ community needs equally diverse representation. More must be done.

Yes, I’ll admit I enjoy watching the yearning gazes, the soft touches of the hand and the gentle undoing of corsets as much as the next person, but I can’t say I relate to it all. We may accept and enjoy crumbs, but they are still crumbs. The distance created by time can sometimes feel like a gaping abyss. The genre’s time period instils a solemn nature to the films, silence taking the place of friendship and laughter. In Portrait of a Lady on Fire, the women constantly maintain a certain reticence, never really relaxing and only switching from the French “vous” to the informal “tu” when speaking to each other in the very final scene. While the formality may come with the genre, it is nevertheless alien to many of us today. Suitors are not hosted in stately mansions by family members, people do not meet at grand ballroom dances in powdered wigs, and lesbians are not merely damsels in distress.

Contemporary representation will always be needed, as entertaining as period dramas may be. It can make the difference between young women knowing their attraction is real and valid, and thinking it’s just a myth created for the male gaze. If a sapphic viewer finds themself thinking: “My attraction to women looks nothing like that and never will,” the film their viewing can hardly be considered real representation. It might be good cinema, but it is not the representation we crave. Would it really be so difficult to make a few cringey romcoms about two women falling in love? Or a high-speed car chase led by lesbians? A blockbuster horror film? The severe lack of variation suggests to me that society, for all its celebration of women in period dramas, is too scared to confront the existence of the modern lesbian.

Just as the characters in these films feel distant to young women searching for relatable representation, they are also distanced from today’s still-rampant homophobia. The women in these period dramas are ‘safe’ to watch: they live and love centuries away from us and are still constrained to dainty and the feminine behaviours. The then-revolutionary actions of these women would hardly be considered norms-shattering now; a little handholding here, a kiss on the cheek there – the films make the audience feel comfortably progressive while posing absolutely no threat to the current status quo. Viewers have no need to confront the discrimination raging on around them yet feel rewarded for pretending to do so by watching. The message is that lesbians can be tolerated and accepted as long as they cannot be interacted with or heard, as long as they do not disturb straight familiarity. There are certainly examples, such as The Handmaiden, which unabashedly and excellently combat many such important issues, but these are exceptions, not the overarching theme of the genre.

This is not to say that there isn’t a wide array of diverse, contemporary lesbian films already out there – there is. But it’s certainly telling that these films struggle to rise beyond the dingy corners of independent cinemas or the murky depths of a never-ending Netflix scroll.

If lesbians are reduced to two-dimensional characters, delicate and curious relics from the past, whose lives don’t intersect with today’s issues, can we really say that these films have benefited the LGBTQ community all that much? That these stories bring to light otherwise forgotten roots and histories is, no doubt, a win, but the battle is not yet over – women should be allowed to kiss on screen without petticoats weighing them down. To Saoirse Ronan and Kate Winslet: I see your romantic paradise in 1840s England and raise you a cheesy romcom with at least one phone and a semi-stable internet connection.