In part two of his series, Josh Self discusses the narrative legacy of the American Civil War. 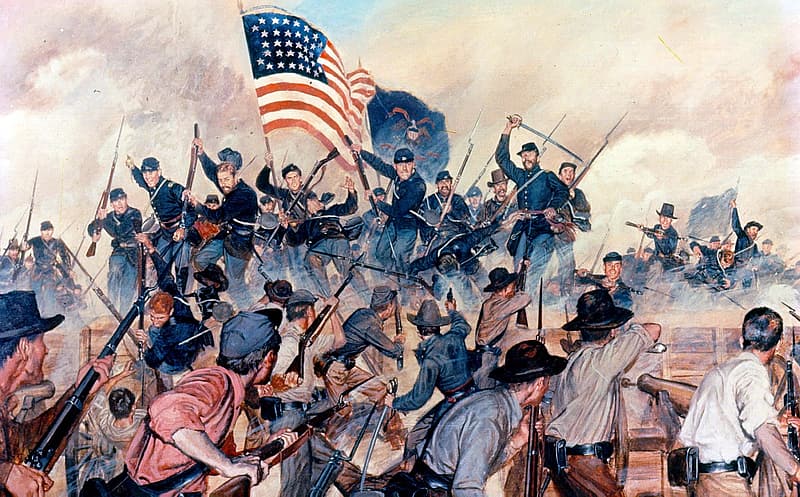 In 1861, 11 southern states seceded from the Union, marking the beginning of the US Civil War. They
did so to prolong and expand the institution of slavery, which had long been in retreat across the
world. It was not uncommon for contemporaries to consider the conflict apocalyptically; indeed,
many Americans began to reevaluate their nations’ long-promised permanence. The historians
among us are nonetheless aware of America’s continued existence. But do we really know how it
still exists? After four years of bloody fighting over the existence of slavery, how did a nation pick
itself up and just—well—continue? Here, I posit that the notion of ‘the end of the American civil
war’ is problematic. When arms were laid down at Appomattox in 1865, the rhetoric and violence of
war hardly ceased. Next came a battle over history, the consequences of which were just as
destructive as the civil war itself.

Following the Civil War’s conclusion in 1865 and the abolition of slavery nationwide, polemicists
rushed to record the rights and wrongs of the previous 4 years. Almost immediately, Edward Pollard
published The Lost Cause (1866). Pollard’s ‘Lost Cause’ theory argued that the war was caused not
by slavery but by an overbearing Union government; that southern armies were never defeated, but
instead overwhelmed by brute force; that the enslaved were happy and loyal to their masters; and
that the southern soldier was brave and virtuous. The ‘Confederacy’ (with its identity as a
slaveocracy diminished) was entered into the annals of American history with these themes attached.
In the years surrounding the Civil War, a bitterly fought tug-of-war over the American historical
memory took place. Opposite sides insisted that their mission was the true expression of the
founding fathers’ hopes and intentions. The Confederacy was said to have fought for the principles
of the constitution, not against them; indeed, George Washington was the centre of the seal adopted
by the Confederacy in 1861. Similarly, in 1896, the Confederate presidential mansion was
dedicated as a museum on George Washington’s birthday; one speaker labelled Washington the
‘first rebel president’. This deployment of America’s usable past provided Confederate Lost
Causism with crucial historical legitimacy.

The Confederates and their ancestors even created their own ‘Washington’, the leading Confederate
military General, Robert E. Lee. A ‘Lee cult’ evolved immediately after the general’s death in 1870
and from this beginning, Lee became the patron saint of the Lost Cause. As a paragon of manly
virtue and duty, Lee soared above politics and became a symbol for the ‘southern way of life’. Lee
henceforth evoked a Southern sense of pride; a soldierly honour; and, above all, a new sense of
racial mastery.

The South saw little challenge to their agenda, the national narrative was that of overwhelming,
exceptional reunion. One Northern paper wrote in 1913 of the ‘peculiar … feeling of reconciliation,
the spirit of nationality, which has developed since the close of hostilities’. Integral to these 3
feelings of reconciliation was Northern acceptance of Lost Cause ideology. For Lost Cause
advocates, therefore, a narrative of defeat had become a narrative of triumph. If it is true that history
can only be written by winners, then it was the white South who won the American civil-war. Lost
Cause ideology henceforth found its home in textbooks, literature and movies—the legacy of which
America is still struggling to escape.

What is important here, however, is not what was remembered, but what was forgotten.
Increasingly, the idea that slavery caused the war became an impediment to the goal of
reconciliation. The African-American presence before, during, and after the war was hence
deemphasised to the point that it was destroyed. As The Christian Recorder observed in 1890, ‘The
poetry of the “Blue and the Gray” [Union and Confederate] is much more acceptable than the song
of the black and the white’. Underneath the celebrated feelings of reconciliation, therefore, existed
the preservation of a new ‘post-slavery’ white-supremacy. Southern states were free to pass a series
of ‘Black Codes’ that made African-Americans, as W.E.B Du Bois put it, “slaves in everything but
name.” Following Lincoln’s assassination in 1865, his vice-president and the man who succeeded
him as president, Andrew Johnson, wrote to the Missouri Governor that “this is a country for white
men, and by God, as long as I am President, it shall be a government for white men.“

Slavery was banished from the war’s causation and written out of American memory. The 1913
reunion at Gettysburg—50 years after the famous battle—provides an appropriate summary. At the
racially segregated event, which also happened to be held on ‘Independence Day’, President
Woodrow Wilson announced: “We have found one another again as brothers and comrades, in arms,
enemies no longer, generous friends rather, our battles long past, the quarrel forgotten—except that
we shall not forget the splendid valour, the manly devotion of the men then arrayed against one
another, now grasping hands and smiling into each other’s eyes.” Perhaps this was moment the
American Civil War really ended—with handshakes, smiles and segregation. Once the 1913 reunion
was over the African-American run paper Washington Bee pointedly asked of the organisers, ‘A
reunion of whom?’. Such a question demonstrates how fundamentally at odds black memories
were with the national reunion.

As America entered the 20th century, with white-supremacy reimagined as ‘Jim Crow’ politics, the
African-American community faced decisions over just how to compete for its place in America’s
collective memory. In 1963, James Baldwin optimistically wrote that ‘the American Negro has the
great advantage of having never believed that collection of myths to which white Americans cling’.
But to deny America’s historical myths is to deny America itself. How should African-Americans,
therefore, approach history? Should they remember their past or America’s invented ones? Should
they simply not look back?

Robert Penn Warren in his Legacy of the Civil War (1961) wrote, ‘somewhere in their bones’, most
Americans have a storehouse of ‘lessons’ drawn from the Civil War. Exactly what those lessons
are, and who determines them, was shaped directly by the decisions made in the decades following
the conflict. In America today the myth of Robert E. Lee is still immensely appealing to both
northerners and southerners; ten U.S. Army bases are still named in honour of Confederate generals;
the Confederate battle flag still flies across America, including in official capacities; statues of
Confederates still litter the American landscape; and 48% of Americans believe Edward Pollard’s
lie that the Confederacy was concerned with ‘states rights’ not slavery. Lost Cause ideology
retains a powerful grip on American popular imagination.

Although African-Americans have ‘the great advantage’ of having never believed these myths, they
have the great disadvantage of being their victim. The attempts to preserve and perpetuate
Confederate culture help explain how America has struggled to disengage itself from its culture
of segregation. Given this, we must extend our understanding of how historical memories are made
and how the dual forces of forgetting and misremembering provide the basis for nationalist
histories. The fight against injustice may or may not involve tearing down statues, but it certainly
involves tearing down what those statues represent—the romanticisation and reverence of distant
men and unknown pasts. In this task, I am reminded of Langston Hughes:

O, let America be America again—
The land that never has been yet—
And yet must be—the land where every man is free.