The act of conscripting American history for contemporary ends is as old as America itself. But today, Americans are more enamoured of their pasts than ever before. In a modern, atomised age, the promise of a shared history directly appeals to the most basic human instincts. Present political discourse is hence saturated with history, its deployment is routine, calculated and, more often than not, rewarding. Many Americans still believe that they are entrusted with humanity’s highest ideals and loftiest aspirations. But who can blame them? They are told as much in every speech.

On July 5th 2020, President Donald Trump delivered his ‘Independence Day’ speech at the foot of Mount Rushmore. Mount Rushmore is itself part of a cultic infrastructure designed to illustrate and reinforce the myth of American ‘exceptionalism’. The monument consists of the faces of four presidents: George Washington, Thomas Jefferson, Abraham Lincoln, and Theodore Roosevelt, who respectively signify the ‘founding, growing, preservation, and development’ of America. Mount Rushmore is, very literally, the ‘American story’ carved into stone; and like the ‘American story’, Rushmore is a monument by white people for white people.

From Rushmore’s very inception, the monument was a symbol of oppression. The faces of Washington, Jefferson, Lincoln and Roosevelt were carved not into just any mountain, but one illegally obtained from Native peoples. In 1980, the US Supreme Court ruled that Mount Rushmore, known to the Lakota Sioux as ‘The Six Grandfathers’, had been unlawfully obtained by the US government. Rather than a ‘shrine of democracy’, therefore, Rushmore mocks any notion of inclusivity. It is telling that Trump believed this location appropriate for his 2020 ‘Independence Day’ speech.

Like the monument behind him, Trump’s speech intended to preserve the ‘virtues’ of former ‘patriots’, but only succeeded in exposing the hollowness of American memory. Although the ‘myth’ of American independence crumbles under Fredrick Douglass’ famous criticism (see my first article), Trump evoked his memory as proof of American exceptionalism. ‘Only America could have produced [Douglass]’, Trump mused, ‘No other place’. At Rushmore, Trump took history into his own hands, at once moulding and mocking figures like Douglass, Harriet Tubman and Martin Luther King Jr. Here, two and a half centuries of myth-making collided to produce a mutant abomination of American history. And the crowd went wild.

The appeal of a mythologised American past has become nearly overwhelming. So usable is America’s past that historian Jill Lepore advises, ‘When in doubt, in American politics, left, right, or center, deploy the Founding Fathers’. Indeed, Americans have invested so much faith in the myth of the ‘founders’ that they are consulted as part of contemporary policy debate. When Congress began debating an overhaul of the health care system in 2009, the ‘Founding Fathers’ were, we are informed, very distressed. ‘The founders are here today’, said John Ridpath of the Ayn Rand Institute, ‘They’re all around us’. In truth, America’s history is hardly history at all.

The founders’ presence is now so pervasive that it transcends politics. Newsweek Magazine coined the phrase ‘founders chic’ to describe the explosion of the ‘fathers’ in American culture. Alongside new biographies, films and musicals (you know the one) charting the virtues of the founders, a strange but significant sub-genre describing the fathers’ culinary impact has taken-off. The highlights of these include:

The founders are so great that their achievements do not stop with ‘America’, but—I guess—with burnt cream and whiskey.

Although appearing inane, these books’ attempts to introduce the long-dead ‘fathers’ into today’s celebrity culture is immensely problematic; this is especially the case considering that these books flirt with and often overtly deal with slavery. At best, the books refuse to discuss the inherently abusive nature of the master-slave relationship, at worst, they legitimise and justify the practice with delicious culinary ends in mind. In The Founding Foodies DeWitt suggests that ‘[the slave James] Hemings lived a charmed life’ and presents a quasi-familial bond between Jefferson and his slaves. Against the backdrop of recent revisionism regarding Jefferson’s relationship with James’ sister Sally, this myth-making proves awkward reading.

With the present rise in myth-making, interest in revisionism has grown in tandem. In 2019, The New York Times launched the ‘1619 Project’, aiming to place ‘the consequences of slavery and the contributions of Black Americans at the very center of [American history]’. Many historians have expressed ‘strong reservations’ about the project, accusing it of replacing one ahistorical ‘meta- narrative’ with another, but critique has come at its most extreme from those who hold their ‘fathers’ closest. Senator Tom Cotton has introduced the ‘Saving American History Act of 2020’ which would defund schools that teach this ‘racially divisive’ curriculum. Defending his bill, Cotton retreated into the comfort of his ‘fathers’, whom he claimed constructed America ‘to put slavery on the course to its ultimate extinction’. In tacit support of Cotton, on 17th September 2020, President Trump announced the establishment of the ‘1776 Commission’ to promote ‘patriotic education’ and ‘the miracle of American history’ in schools. There can be no doubt that the sense of crisis surrounding the Black Lives Matter movement has brought with it a resurgent reverence for the ‘American story’. Similarly, Trump’s election defeat will serve only to inspire America’s myth-makers more.

Simply put, the ‘American story’ is so resilient and long-enduring because it is useful. It silences dissenters and manufactures consent; it destroys and creates in equal measure, invariably distorting all around it. For those silenced by the American story, a new ‘America’ is long overdue, and this ‘America’, envisioned by all of David Walker, Frederick Douglass, W.E.B Dubois, James Baldwin and Martin-Luther-King, is possible. In my final piece on the ‘American Story’, I am, again, reminded of Langston Hughes:

America never was America to me,

And yet I swear this oath— America will be!”

In case you missed it: now read Part 1 and Part 2 of The American Story. 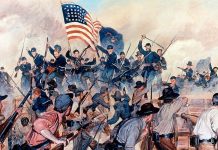