Angela Eichhorst reports on the flooding in Oxford. 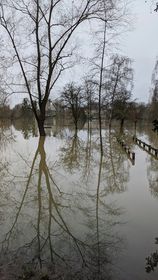 Several colleges face flooding as part of the ongoing weather affecting Oxfordshire this month. Lady Margaret Hall and Magdalen grounds were particularly affected, with pictures of flooded outdoor grounds shared across Twitter and Instagram by students. “We have experienced it before,” says LMH’s men’s welfare officer, Spike Hagan. “Being on the river, LMH is prone to flooding,” says Hagan, who saw the flooding begin on the 25th going into the 26th of January. Hagan says the issue has never been addressed by LMH’s administrative team, but “it hasn’t really affected me, except for being able to visit an LMH institution – the Shack,” where students hang out at night to play scrabble or have a drink.

The water meadow in Magdalen college has also flooded, “but that is basically designed to flood and does very frequently to no one’s detriment” says third year student Lizzie Craig. Flooding hasn’t affected mobility much as “the paths are mostly okay because they’re raised,” says Craig. The picture above shows the flooding at Magdalen College.