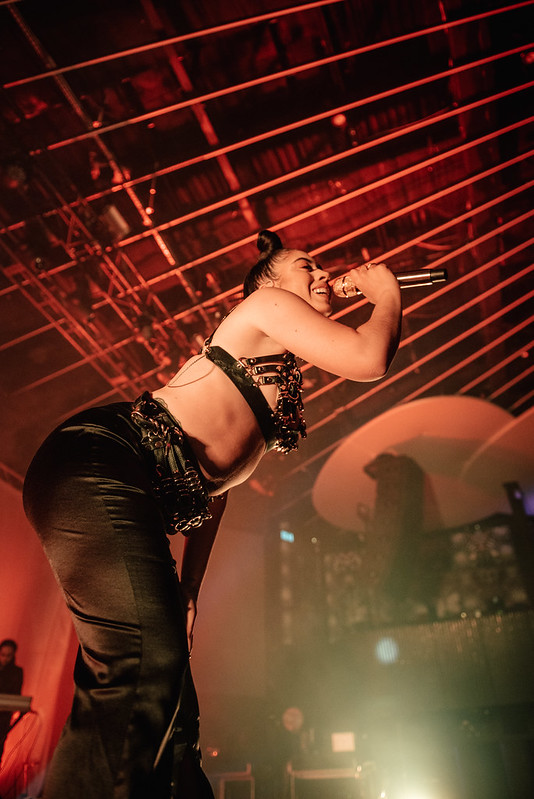 If you’ve been scrolling through TikTok recently, chances are you’ve heard the opening lines of telepatía by Colombian-American singer Kali Uchis. The song features on Uchis’ latest album and her first to be produced in Spanish, Sin Miedo (del Amor y Otros Demonios) – translating as Without Fear (of Love and Other Demons). But what has led to Telepatía’s rise in popularity – and what does the shift to writing in Spanish signify for Uchis?

Kali Uchis, born Karly-Marina Loaiza, made her first splash into the music world in 2012 with her mixtape Drunken Babble – written almost entirely in one night, at age eighteen, from her childhood bedroom. From the beginning, Uchis has been a bastion of entrepreneurial spirit and authenticity – and in her latest album, this is more true than ever. Though Uchis has never hesitated to add Spanish to her music, and has always been proud of her Colombian heritage, I believe the move to an entirely Spanish album reflects a growing confidence in her self-image and her place in the world.

Though songs such as ‘Know What I Want’ and ‘Loner’ in Uchis’ first album Por Vida (2015) reflect her characteristic confidence and enjoyment of solitude, there remains a quiet but lingering uncertainty in other songs like Lottery. Here we see Uchis as a new singer taking tentative steps into the music world, self-consciously asking ‘Will you take this chance on me?’. However, by the time she produces her second album, Isolation (2018), Uchis’ confidence has skyrocketed – and with that comes her first songs in Spanish, and a more confident celebration of her past.

Uchis’ Colombian heritage is close to her heart, and this is one of the many themes of the past that is reflected in Isolation, an album that Uchis claims was written in a ‘subconscious’ manner. Growing up in her working-class immigrant household, Uchis recalled in a 2018 BBC interview how she witnessed her relatives work relentlessly in the US to support families back in Colombia, missing birthdays and graduations: “my entire childhood I watched everyone around me lose their lives trying to make money”. This experience is the motive behind her song ‘Your Teeth in my Neck’ which explores the exploitation of Latin-American immigrants. Here an anti-capitalist Uchis states how ‘Rich man keeps getting richer, taking from the poor’, asking ‘They’d take our worth, they pay us dirt / Is it worth it?’. Another song, Miami, explores Uchis’ childhood wish to escape her situation: ‘I was just a little girl / Had my sights set on a bigger world / Got myself a visa / And started catching flights to where the grass is greener’, but also subsequent feeling of having nowhere to go: ‘I’m always on the run / Now I can’t afford to look back’. Uchis also channels her Colombian heritage more in Isolation than previous albums with her reggaeton Nuestro Planeta, the album’s only Spanish-language song, featuring Colombian performer Reykon.

“The potentially risky decision to produce a Spanish album to a predominantly English-speaking fanbase reflects Uchis’ consistent commitment to be authentic to herself.”

The decision to release a Spanish album with Sin Miedo can then be read as an explosion of confidence from Uchis: a complete ownership of her heritage that features a multitude of genres central to Latin American musical history, from the slow-tempoed bolero to fast-paced reggaeton. The potentially risky decision to produce a Spanish album to a predominantly English-speaking fanbase reflects Uchis’ consistent commitment to be authentic to herself, something she consistently refers to in her music and on her social accounts: “I just want to be the healthiest, most international & loving version of myself”, she tweeted on the 1st February this year.

However, Uchis’ music can transcend the barriers of language because it exudes both a tough self-reliance and a transcendental sense of self love, regardless of the language it is produced in. Described by the BBC as carrying ‘the hard-won determination of a woman who’s had to fight for her place in the world’, it is Uchis’ determination and her commitment to self-growth that resonates with both her English-speaking and Spanish-speaking fans. Sin Miedo is also characterised by its versatility, both in genre and theme, meaning it appeals to a wide range of emotions. From the raunchy te pongo mal and the unapologetic bossiness of ‘¡aqui yo mando!’, to the dreamy ‘aguardiente y limón’ that mixes Edenic imagery with that of a well-known Colombian drink, to a simple yet visceral wish for peace in ‘quiero sentirme bien’, Uchis’ album is aptly named as she produces boldly and without fear. Uchis also utilises spiritual, metaphysical concepts in Sin Miedo in songs like ‘telepatía’, ‘vaya con dios’ and ‘ángel sin cielo’, which I believe is part of ‘telepatía’s’ popularity on TikTok –an app where all things spirituality, witchcraft and manifestation are currently trending. The song’s title, telepathy, is also an ode to the intangible ways we can connect with the people we love. Written during a global pandemic, the idea of connecting even when apart is even more visceral.

Sin Miedo’s closing track, ‘ángel sin cielo’, further harnesses this idea of connecting to others even when alone. Written solo in her bedroom once again, Uchis ends her genre and language-barrier-defying album with a nod towards her roots: both her Colombian roots and the roots of her career, back when she produced an entire mixtape from her bedroom. With hauntingly beautiful vocals, a celestial Uchis softly sings ‘Ángel sin cielo / Hay que hacerlo sin miedo / La vida es una y a nadie le debo’ (‘Angel without heaven / You have to do it without fear / Life is one and I owe no one’). Uchis ends her chart-topping album with a celebration of something she has quietly done from the beginning: celebrated the power of being herself, unapologetically.