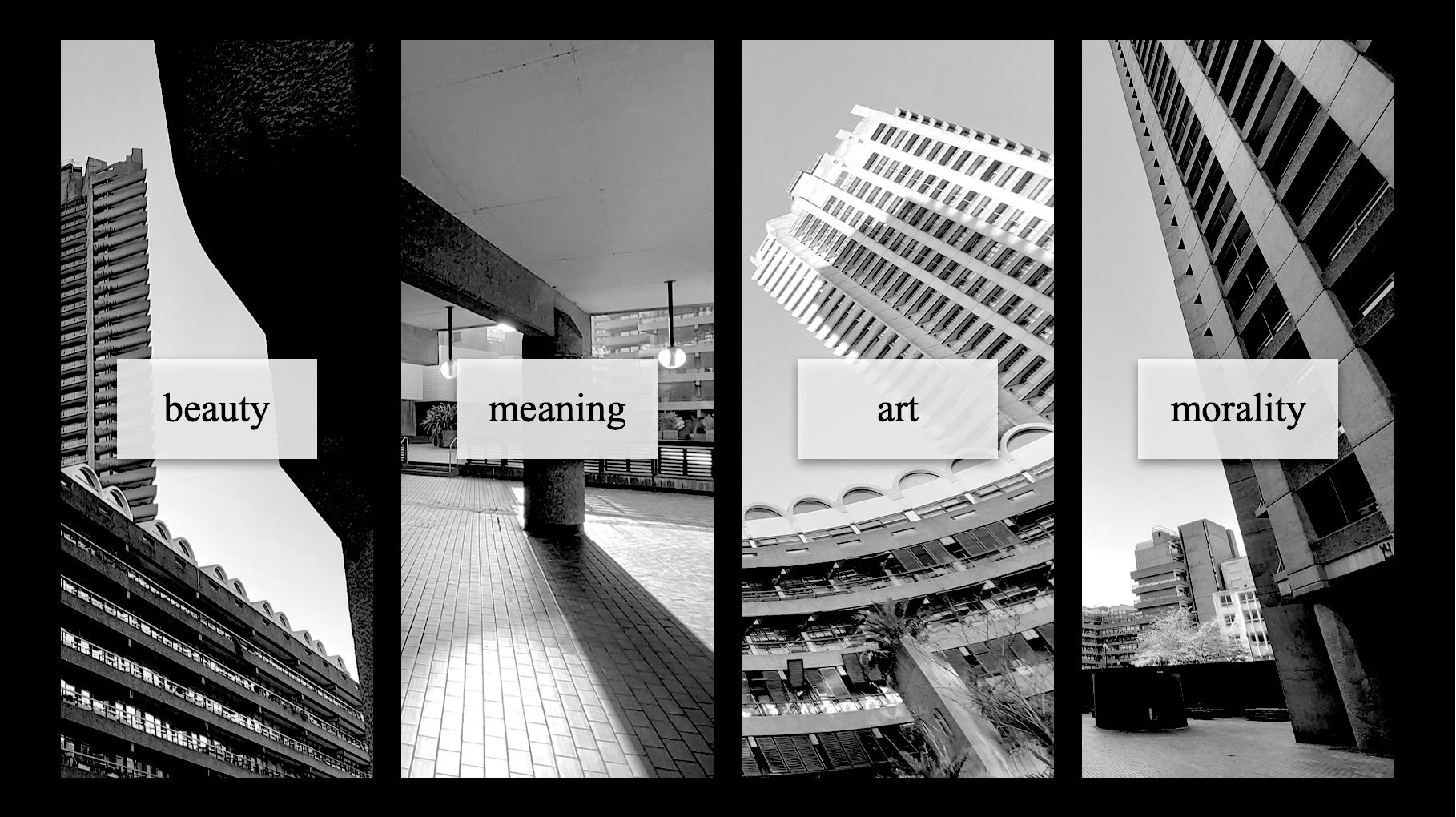 When was the last time something was so beautiful it shocked you?

During the vacation I went to the Barbican Centre one afternoon, as the sun was setting. Having spent the day walking, my feet were nearly numb, but still I kept wandering, the building’s hard-edged, sunlit shapes drawing me further and further in. Only when numbness turned to aching pain did I finally make myself sit down, still gazing at how concrete and light and glittering water intersected throughout the building complex.

The notion that beauty needs no other justification is a captivating one. In an essay about his own artistic principles, the Victorian painter James McNeil Whistler argued that “art should be independent of all clap-trap”—in his mind, art had no responsibility to impart moral lessons, a notion that thinkers such as Oscar Wilde would later champion. I think that they would be pleased with my total commitment to this beautiful experience, and the drug-like intoxication this sight produced.

I have a strange passion for the post-war modernist style of architecture that the Barbican is an example of—strange because the foundation of this beauty is a mire of tangled issues. This style, pioneered by architects such as Le Corbusier, stressed functionality, replacing the chaotic clutter of 19th-century cities with carefully planned expanses of green space and concrete building blocks. Le Corbusier argued that beauty should come from simplicity and functionality, calling excessive decoration “an abominable little perversion”—architecture which functioned well and improved society would be beautiful without the need for adornment.

But there are flaws to this approach. Take anthropologist James Holston’s analysis of Brasília, the capital of Brazil, which was constructed according to modernist architectural theories in a bid to create a more community-centric and egalitarian society.

In his book The Modernist City: An Anthropological Critique of Brasilia, Holston notes that the apartment blocks of the city, conceived of as being where rich and poor alike would live, still featured servants’ elevators and maids’ quarters—ones which were “no bigger than a large closet”. He comments that when he asked an official in the city’s planning commission about why a supposedly egalitarian city would still need these features, the answer he received was “it has to be that way”. The result of this mismatch between an egalitarian ideology and long-held class structures meant that these reforms did not produce concrete change, but merely served to “increase humiliation” for the working class. The picture he paints is of a utopian theory which nevertheless clings on to the unequal ideologies of the past it aims to eradicate.

Even the very proportions that these buildings are based on have come under criticism. Le Corbusier designed his buildings according to a system of measurements called Modulor, based on the idealized form of a six-foot-tall man, which made for grand and elegant buildings. But this sort of abstract theory struggles with the real needs of the public. As this article in The Guardian observes, elegant flights of stairs look good, but are no use to someone pushing a stroller or a disabled person, and underpasses that seem functional in principle could have threatening blind spots that become unsafe to navigate. With the benefit of hindsight, the notion that modernist architecture is driven by functionality seems dubious.

The stridently utopian ideology of modernist architecture seems a strange thing to compare with the aestheticism of Wilde and Whistler that I mentioned earlier. But I find it interesting that even as Le Corbusier and other architects of this generation sought to divorce themselves from historical inequalities and flawed urban designs, these same issues resurfaced in their work. And even though “art for art’s sake” sought to be a revolution against ideology in art, it could be accused of being an exercise in justifying the beliefs of the Victorian upper-class, a way to present aimless indulgence as moral superiority. Such an accusation would oversimplify the nuances and ironies of what Wilde and his cohort believed, but the fact still stands that it is difficult to conceive of art that does not reflect some form of ideology. Even art that claims to be non-ideological, or to have tossed out old beliefs, may still be influenced by unexamined theories.

Let us set aside the notion of non-ideological art for the moment and turn to its polar opposite. The Marxist philosopher Walter Benjamin, writing during the rise of Italian fascism in the 1930s, commented that fascism sought to frame war as being aesthetically beautiful. He explicitly states that the ideology of Mussolini and the fascist-allied Futurist movement is the “consummation” of “art for art’s sake”, arguing that the hedonistic pursuit of beauty was being warped by fascism into a means of justifying all sorts of hideous atrocities. Benjamin believed that the necessary response was for Communism to politicize art, using it to point out the evils of inequality and agitate for revolution.

In this framework, the artist’s moral responsibilities are clear—but what are the responsibilities of the audience? Beauty has a tremendous persuasive power, one that propagandists and advertisers throughout history have taken advantage of. Consider movies like The Birth of a Nation or Gone With The Wind, technical masterpieces which used the storytelling tools of cinema in ways that were highly original for their time. But these stories were also racist fictions which glorified the institution of slavery and the Ku Klux Klan—ideas which were presented to the audience with all the magnificence and glamour that Hollywood magic could muster.

I think that it’d be an utterly irresponsible act of self-deception if I tried to ignore how closely art reflects political issues. Considering this relationship can be difficult, especially when it relates to art that one might like to go on enjoying naively, but it’s also necessary.

But do I then have a responsibility to avert my eyes at the sight of a beautiful building, because of the ideology that it is constructed on? Is beauty something dangerous that we should only engage with as a way to expose and defuse the ideas it hides?

Art may be tied up with ideology, but there’s a difference between a movie and a party political broadcast, and I doubt that anyone but the most puritanical critics (on either extreme of the political spectrum) would want to judge art solely on moral and political grounds. There’s something frightening about the rapturous experience of beauty—it can go against our attempts to write down clear moral rules, making us cheer for things that we might otherwise find repulsive. It falls outside our expectations, forcing us to reconsider our assumptions about the world. This is why art is fascinating and valuable, but also why it’s so challenging to think about.

When considering this matter, I’m reminded of Susan Sontag’s essay “Against Interpretation”, and its argument about what the role of artistic criticism should be. Sontag suggested that critics tended to focus on political or psychological ways of understanding artwork, framing art as a means of delivering complex and intellectual allegories. However, this approach can “usurp [art’s] place”, neglecting the qualities that draw people to it in the first place—she notes that the use of imagery and editing in a movie is just as worthy of study (if not more so) as the philosophical ideas it espouses. Criticism should not bury art under intellectual jargon, Sontag concludes, but help us consider the mechanisms and techniques which make it capable of moving us.

Beauty, by its very nature, can shock and disorient us. That’s what makes art, whether in the form of a building or a book, valuable. I cannot imagine embracing beauty as a goal in itself, not when it can propagate and legitimate monstrous ideologies—and yet focusing solely on ideology would miss the point of art’s complexity. Beauty’s persuasive power is frightening, perhaps dangerous, but that only makes it especially vital to engage with what ideas that beauty communicates, and the nuances of how it does so.

These questions will likely run through my mind whenever I walk through a beautiful building, or admire a painting, or watch a film. It’s a strange source of anxiety—but I can’t help but want to look for the right balance between these positions (if one is even possible), to find the correct way to look at a building.