Why the latest BBC cuts are the most dramatic yet 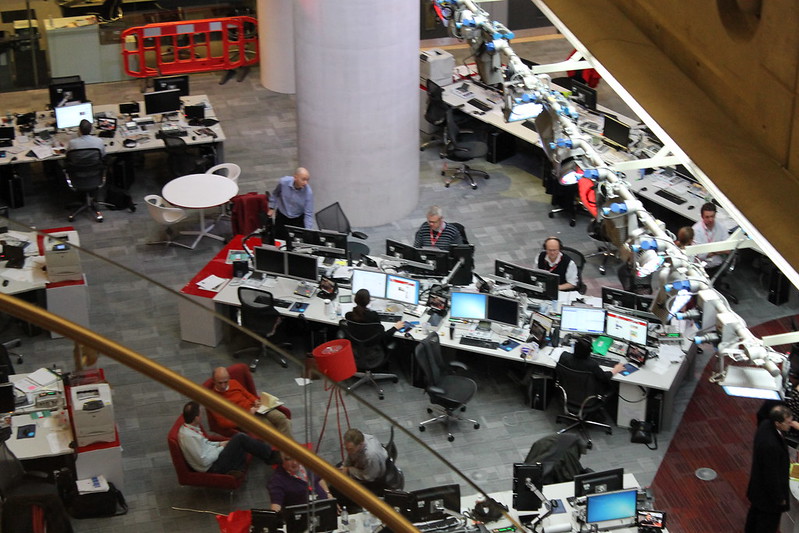 Nadine Dorries, the Secretary of State for Digital, Culture, Media and Sport, has made no secret of her dislike for free and independent media – her bizarre insistence on the privatisation of Channel 4 says all you need to know about that. When not rapping about online safety on TikTok it could even be said to be her favourite pastime. The recent cuts to the BBC, forced by Dorries’ freezing of the licensing fee for the next two years, will see the closure of BBC World News, the moving online and cutting of CBBC and BBC 4 programming, and the slashing of regional programming in numerous areas, including Oxfordshire.  The ramifications may not be obvious at first but they could prove catastrophic for children in this country and people all around the world.

In January this year, just as BBC boss Tim Davie was crying out for more investment in order to keep the BBC relevant, Nadine Dorries announced that the licencing fee would be frozen at £159 for the next two years. With no more government investment offered to make up the deficit, Davie warned at the time that the organisation would be left with “tough choices to make” as it tried to deal with the resulting £500 million budget cut – but few could have foreseen how widespread and dramatic these changes would turn out to be.

Let’s start with CBBC. Founded in 2006 and serving all children over the age of six, the channel has been described as a “lifeline for parents” throughout its time in service.  Never was this clearer than during the COVID-19 pandemic. With schools closed and countless families cut off from education completely by woeful home learning provision, expensive internet bills, and a lack of technology, CBBC’s ‘Bitesize’ service picked up the slack and delivered lessons to millions across the country. CBBC’s Newsround television programme, founded as a BBC One programme in 1972, is a unique daily news bulletin that provides informative and neutral news to children that is suitable for all ages and has won awards around the world for its coverage of global affairs since its foundation. Again all-important during the pandemic, parents have increasingly become reliant on the service to help their children become informed on global affairs safely in the age of fake news and the polarisation of the media.  Newsround is now set to be cut completely. Horrible Histories, the vehicle that has taught millions valuable lessons about history with its trademark catchy songs and hilarious sketches, is also facing the axe.

But the children’s channel doesn’t only serve to inform; it also provides a safety blanket that all parents know offers high-quality entertainment programming backed by positive moral messaging and free of any of the controversy or swearing found on online streaming services such as Netflix and YouTube. These latest cuts will only drive young people to those services that Dorries herself has lamented are slowly taking over the industry.

Another major change is the closure of BBC World News and the dedicated BBC News channel, with the two set to merge into one single service. In a world with increasingly regulated media outlets, from Afghanistan to Russia, the World News service has been hailed as a shining light by those who have emerged from war zones and oppressive regimes worldwide. Often, in areas where the internet and satellite television are near-impossible to access, it is the only trustworthy source of news in the face of government propaganda. It reaches 364 million people every week, broadcasts in more than 40 languages, and even offers free English teaching resources to millions around the world. According to its website, “It is one of the UK’s most important cultural exports – inspiring and illuminating the lives of people across the globe, helping them make sense of the world we live in.” Its merger with the increasingly UK-centric BBC News Channel and subsequent cuts to programming focused on the rest of the world will be devastating to people across the more than 200 countries it broadcasts in. What is more, as the government constantly provides us with warnings about the rise in the power of Russia and China and the risks of information wars from their governments, the move will see Britain throwing away the most valuable vehicle it has for ‘soft power’ in defence of democracy and liberal values.

The cuts don’t end there. In fact, they seem somewhat never-ending…. Next on the chopping block and at the opposite end of the spectrum to World News is further slashing of regional programming. Numerous areas around the country, including Oxfordshire and Cambridgeshire, will see the complete closure of their regional news services, merging with those based in Southampton and Norwich. Local radio programmes will be hugely cut back with programming to be ‘shared’ among areas. Yet again, the most vulnerable will be the most severely hit, with pensioners and those who can’t leave the house by far the most reliant on these channels for information relevant to them.

BBC Four has long been touted for closure but this move to iPlayer is another decision that flies in the face of logic. Its primary audience of older people are those most likely to be without access to the internet and will therefore be left without the service altogether. The educational documentaries that it offers will also be restricted to those with reliable internet access and devices to consume that content on. It should also be noted that the channel still attracts far larger audiences than the youth-targeted BBC Three channel that only moved back onto terrestrial television a few months ago.

And then come cuts to BBC radio.  Radio 5 Live will see its ‘5 Live Sports Extra’ station axed completely and all of the station’s services will move entirely off medium-range radio as part of further cuts to free sports coverage from the national broadcaster. Most significant though is of course the closure of long-wave Radio 4. Routinely listened to by hundreds of thousands, it is a valuable resource for news and shipping forecasts across the country; tuning into the programme is even the official routine protocol for the UK’s submarine fleet to check that the nation is still functioning normally. After losing all of its dedicated programming, from radio dramas to Desert Island Discs, the station will eventually be cut completely.

All in all, these moves will see well over a thousand jobs cut in the next few years alone. Davie says that “This is our moment to build a digital-first BBC. Something genuinely new, a Reithian organisation for the digital age,” and that “we need to evolve faster and embrace the huge shifts in the market around us.” In reality, the idea that the national broadcaster can compete with the internet and streaming giants is the stuff of fantasy – that much is demonstrated by the fact the BBC Three moved online in 2019 before returning to terrestrial television earlier this year. Nonetheless, the BBC occupies a valuable and unique place in British culture; Davie must have seen this himself when,  before he took over as CEO, heled the closure of the 6Music and Asian Network radio stations in 2010 but then was forced to make a  U-turn in the face of public opposition.

The media landscape is changing and there is no doubt that the BBC needs to change with it. It has reaped the rewards of the continued improvement of its iPlayer service in recent years with programmes proving successful all around the world.  In the end though, it must not forget why it exists as a public service broadcaster. What has made it different from the rest of the media and kept it so special and relevant since its foundation is its focus not on profits but on providing a high-quality and valuable service to the country and the world. Make no mistake, these cuts change that.  They risk marking the beginning of the end for the service altogether as it fades from relevance, unable to compete without advertising income and so with a comparatively measly budget, and leaving millions in the lurch as it chases unattainable profits.