Cherwell Town Hall: Anvee Bhutani and Charlie Mackintosh in their own words 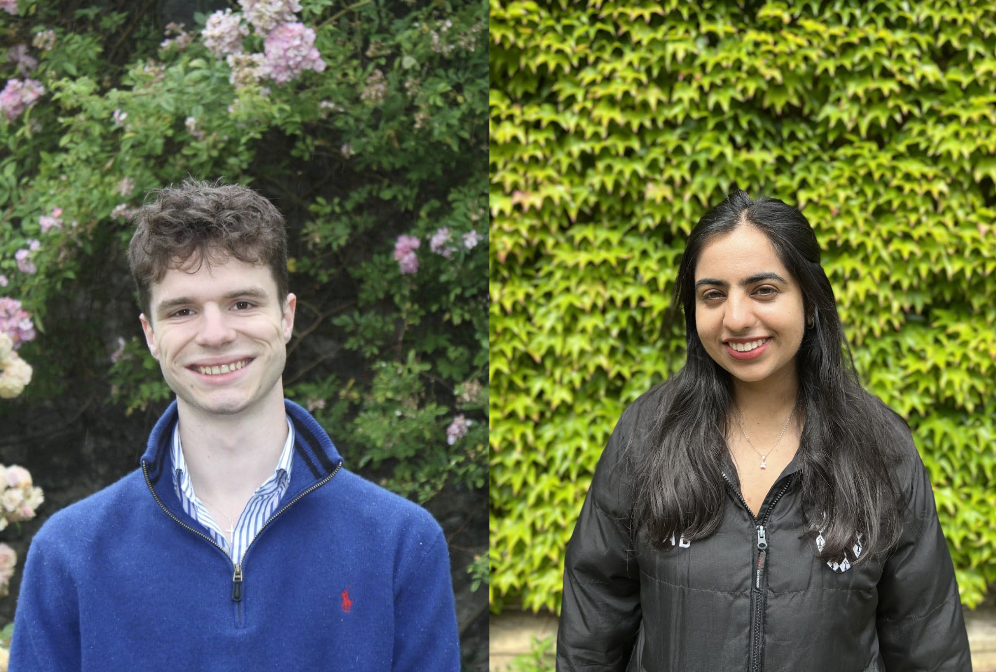 With Union members going to the polls tomorrow, Cherwell speaks with the candidates for the presidency. They were given the opportunity to comment on everything from the highs and lows of their time at the Union to their favourite musical artists. The interviews have been edited and condensed for clarity.

Briefly, describe yourself before Oxford

I’m Charlie. I’m from Worcestershire. My dad’s a teacher, and my mum used to work at the BBC. She’s now a self-employed historian. I go to Oxford on an army scholarship, which means I’ll go to Sandhurst after finishing Oxford, and then serve in the army.

Why did you get involved in the Union?

I did debating at school and went to the Oxford Schools Debating Finals. I’d watch YouTube videos – a classic sort of experience of the Union. I spoke with someone who was involved and realised the Union was something I’d love to get involved with. But I maintained very strongly from what I’ve heard from everyone, I didn’t want to get involved with student elections. I thought they were horrible. I thought they weren’t really for me. So I applied for Appointed [Committee] and really, really enjoyed it.  But I sort of realised beyond committee that like, much as you may hate the electoral side of things, you can’t actually do anything.

Why are you running for president?

Everyone talks about change at the Union in a very short-term manner. The same five pledges are made in every election. That annoys me because if you take a more realistic approach to what you can do, you have the possibility to actually do something. The way you do that is by identifying the barriers to us lowering the membership fee, putting a lift in, and getting a larger budget for access,

What are some highs and lows of the Union experience?

On a personal note, I’ll look back at the photos from the last two years and realise I’m incredibly grateful for the friendships I’ve made. An ex-hack told me that the Union becomes ‘like a second college’, and I’ve found that to be very true. I had my first relationship in the Union, and made some of my best friends here.

On the professional side, my first paper speech was a special moment when I realised how glad I was that I got to do this. My best friend bought membership in the queue so she could come and watch. Also the no confidence debate at the start of the academic year, which was the first debate with full capacity: Jacob Rees-Mogg got booed as he walked in. The atmosphere was electric, and I thought ‘this is what everyone says the Union can be like at its best’.

One thing that’s disappointed me is that the Union has not hosted a panel on the Uyghur genocide. I think it’s an issue that gets nowhere near enough coverage, and the Union has a fantastic opportunity to discuss this matter.

What is a musical artist you can’t get enough of?

If you could invite three speakers, who would you invite?

What is your favourite non-Union event in Oxford?

My college. I named my slate after it. I originally wanted #verb, as I think slate names are incredibly vapid – but my officers vetoed it.

What’s next for Charlie Mackintosh?

I’ll serve in the army, but it’s important to me that I’m able to have a family and provide my kids with an upbringing similar to the one I’ve had. A lot of the jobs that sort of appealed to me, or a lot of my friends are considering doing aren’t remotely compatible with that. I’ll either train as a teacher or go to law school. I’ll probably end up being a  country barrister, or a history teacher in a secondary school somewhere.

If you had one message for voters, what would it be?

It’s a trope, but actions speak louder than words. Student politics becomes very self-obsessed, self-absorbed. But at the end of the day, people in the Union want good speaker events, fun debates, meaningful change, and a space where they can enjoy themselves and study. The best opportunities for that is by having the people who care most about the institution for its own sake, rather than for what it brings to them. And who know the most about it and the best ways to implement that change. And I think that’s me.

Briefly, describe yourself before Oxford

I was born and raised in the United States, near Silicon Valley in California. Oxford was never really on the cards. On an off chance at 3am online I found a guide for Americans applying to Oxford. I’d never thought of it as an attainable thing. My parents emigrated to America from India in the late 90s for better opportunities for themselves, my sister and me.

Why did you get involved in the Union?
It meant a lot to me to be able to get involved with the Union from the start. I did debating at school and watched Union debates online. After joining in first week, I went to debating workshops every Sunday, and went to Thursday debates as a guest.

Why are you running for president?
I’ve been involved in a lot of student campaign groups. The most important things for me are things like workers justice and material issues like the living wage. I thought that the SU would be the best forum through which to enact those changes and affect policies which affect students. The SU and Union presidencies are seen as two hugely important student leadership roles. But they’re actually quite different; as SU President, your job is policy making and to represent students. I got re-involved at the Union because I had friends there. And then in Hilary Term (2022) I ran for Secretary because of the people I was running alongside.

What are some highs and lows of the Union experience?

Interviewing Zhou Fengsuo was a big highlight. Such a cool guy. I’d say interviewing Chomsky, as well. That was a bit of a life highlight. I align with Chomsky on a lot of things politically; the guy has opinions and he’s not afraid to show them. Someone like that, with a backbone and strong voice, I really admire.

There was also a woman who made accessibility requests to people at the Union because her wheelchair needs to be accommodated. Her emails were bounced around, and nobody got back to her. This term she was finally invited in for a meeting and several people spoke to her. I witnessed it happen, and it was horrible. She’s a paying member of the society. Those kinds of moments leave a bitter taste in my mouth.

What is a musical artist you can’t get enough of?

Kendrick Lamar. He released an album last month in May after years of hiatus. I literally haven’t listened to anything like it since. He’s a lyrical genius. He’s a poet. He’s an artist. He’s everything!

If you could invite three speakers, who would you invite?

What is your favourite non-Union event in Oxford?

I love May Day. Maybe it’s because I go to Magdalen. I stayed up for the past two May Days. The novelty of ‘mundane’ Oxford experiences like going to formals with my friends still hasn’t worn off. In the past year I’ve gone to formals at several colleges. Sure, at Oxford it’s normal and day-to-day. But I think it’s kind of cool.

What’s next for Anvee Bhutani?

At the moment, I think journalism is where I see myself. I enjoy the hustle and bustle of politics, and spectating and commentating on it. Student journalism has been a very fruitful experience, and it’s something I deeply miss.

If you had one message for voters, what would it be?

Pick someone who’s done it before, knows what they’re doing, and knows the job. Anyone can create a good termcard. I’ve done it for five terms. Not everyone can make leadership and governance decisions.