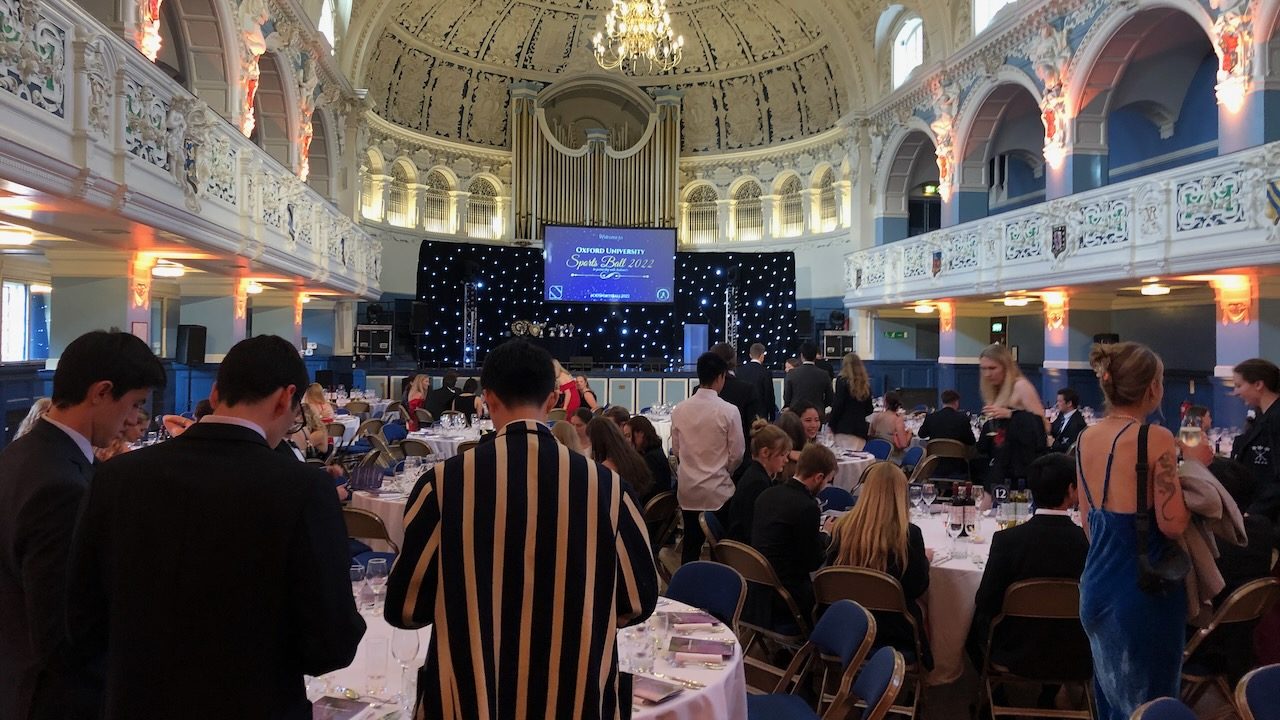 A night of glitz and glamour at the Oxford City Town Hall saw the winners of the Oxford University Sports Awards announced. Nick Cevetta and Grace Molloy took home the biggest prizes, winning Sportsman and Sportswoman of the year respectively.

This year marked a return to an in-person event and hundreds packed into the beautifully decorated main room in the City Hall for a sit-down three-course meal, with the winners being announced periodically throughout.  Afterwards, the celebrations continued in style with live music and dancing as everyone came together to toast a superb year of university sport.

Jaidan Reeder was the first name to win on the night, taking home the cup for Student Coach of the Year for his wide-ranging work with the various rugby league teams that have come on leaps and bounds this campaign.  Coach of the Year was awarded to Hector Worsley for his re-energising of the university polo set-up and Georgi Pramatarov received one of the biggest cheers of the night when crowned Teammate of the Year.  Despite missing the entire season through injury, Pramatarov remained a key part of the squad and a special video from his teammates announcing the winner demonstrated just how highly valued he is in the basketball set-up.

Alice Garner’s exceptional athletics achievements on the national stage won her Fresher of the Year – the first of the second batch of trophies to be handed out.  After that, it was on to the much loved Stewart Humble, who won Most Oustanding Contribution to Sport.  His dedication has seen the side manage to kick on at a league level and also secure a permanent pitch on University Parks.  After that the Millipedes were crowned team of the year – the Women’s Second’s Athletics team have enjoyed an incredibly successful year.

The Blues team of the Year was the first of the biggest prizes to be announced with the hockey men’s Blues given the trophy after they beat Cambridge 3-1 in their Varisty match this year and enjoyed huge success in the league.  After the announcement of Civetta and Molloy as the two Sportspeople of the Year for their achievements in rugby union and orienteering, football, and cross country respectively, Oxford University Rugby League was crowned Club of the Year.  The roof nearly went soaring off the hall at this point.

All in all, a great night was had by all and the decadent celebrations were a fitting way to celebrate the achievements of not just the winners but all those shortlisted for such prestigious prizes.