Oliver Hall reveals all from this chain restaurant on Friars Entry. 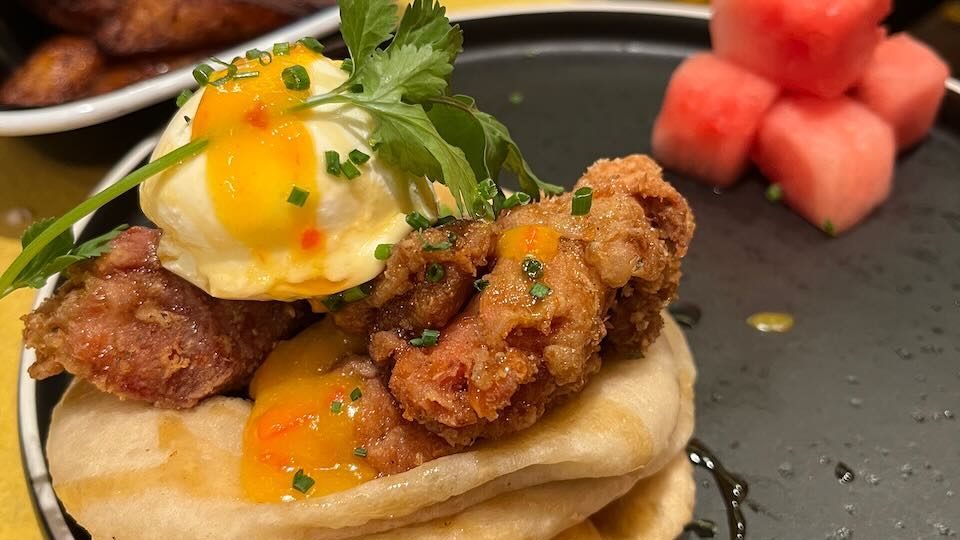 Character is something hard to foster and maintain in a restaurant that is part of a chain, especially one that now numbers 48 in the UK — the fact that Turtle Bay manages to achieve that alongside great quality food is perhaps its biggest achievement. It brings a Caribbean ‘vibe’ to central Oxford and is genuinely unique in the city in its food, style, and atmosphere.

That Caribbean character doesn’t come through by accident either. Managers David and Csenge tell me that it is the result of careful design and planning that comes right from the top of the organisation. Founder Ajith insists that the open bar is the first thing customers see when they enter every restaurant, likewise with the open kitchen and its grills. These are placed in the service window, front and centre for everyone to see them used for all of the Roti dishes.

The menu itself is truly eclectic, drawing on all areas of the Caribbean with an eye to authenticity tailored to the UK market. During our visit we were able to sample a wide range of dishes from all parts of the menu; stretching from the famous bottomless brunch, to currys, jerk pits, buddha bowls, soul food, and burgers. The one thing that was the same across all areas was the power of the flavours. Almost without fail, everything we ate was punching full of a brilliant mix of spice, heat, and freshness.

Bottomless brunch is definitely what has made the restaurant most well-known and after trying the Honey Bunny Yardbird I can see why. The dish is a Caribbean take on American-style chicken and pancakes and consists of three soft and fluffy roti pancakes, topped with brilliantly succulent fried chicken, cream cheese, and maple syrup. Served with watermelon for another tropical spin, the combination of flavours works eerily well and I was left going back time and time again for more.

Among the starters, the crispy squid and the ‘Trini doubles’ stood out. The squid are thin and only very lightly battered — a welcome change from the pub-style ‘calamari’ that you often get in the UK. They are drizzled with coconut milk and chilli sauce — two sauces that combine brilliantly. The Trini doubles are intriguing — two roti with curried chickpeas, cucumber relish, and coconut. They have a deep backstory but are definitely plainer tasting than some other things on offer.

When most people think of Caribbean cuisine, jerk chicken is what jumps out. Turtle Bay’s is seasoned with thyme, which is a nice touch, but the chicken breast itself was less juicy than in some of the other dishes. The slaw that came alongside was a good balance of creamy and fresh but not overdoing it whilst the side salad stared with beetroot, tomatoes, and a truly unique but delicious coconut-infused dressing.

Fish fry features as a nod to Barbados and consists of more of that brilliant squid and a chunky piece of skin on salmon alongside fries. The squid were just as good as before and the skin of the salmon was irresistible but the meat itself was slightly overdone and lacking in flavour as a result. The spicy mac and cheese is a good accompaniment, bringing a welcome chilli kick to a dish that most don’t bother innovating on.

Another signature here is the curried goat and boy does this one live up to the hype. Cooked for five hours in a delicious sauce, the meat falls apart as a result and is packed full of hearty flavour and warmth.

Elsewhere, the buddha bowls present a fresher and lighter alternative to soul food. Having said that, you certainly won’t be left feeling hungry with each one including brown rice. These dishes are real eye-catchers, made up of lettuce, watermelon, pineapple, cucumber, tomatoes, mushrooms, squash, beetroot, avocado, and more before getting finished off with your protein of choice. It’s almost impossible to get a complete bite but, if you make the effort, the combination of flavours is well worth it! Burgers are also on offer but if you are to make the trip I’d definitely advise sticking to the classics.

Drinks are of course where Turtle Bay has really made its name. Open all the way through from breakfast to midnight, the restaurant morphs into a late-night location after nine with a second happy hour and great ‘late-night-eats’ deals. The music amps up and the result is an atmosphere tailor-made for cocktails and rum sharers!

Speaking to staff, it is clear that they are more keen now than ever before to draw students in before going out to clubs and house parties. They are currently offering all students a free £10 to use after 9 PM and, together with the attraction of 4 cocktails and 2 small plates or sides for just £24.50, Turtle Bay makes a great spot to settle in for the evening or stop off at before a night out.

Overall, the remarkable thing about Turtle Bay is how it manages to cater to so many different customers and markets successfully. From breakfast, to brunch, to lunch, to dinner and beyond, the food is unique and flavourful throughout. If you are looking for a totally different experience from anything else on offer in the city right now, this is the place to go.