And suddenly there came a sound from heaven as of a rushing mighty wind, and it filled all the house where they were sitting. And there appeared unto them cloven tongues like as of fire, and it sat upon each of them. And they were all filled with the Holy Ghost, and began to speak with other tongues, as the Spirit gave them utterance.

Religious experiences are definitely real, even if God might not be. This is the Pentecost when the Holy Spirit comes down and fills up the disciples, inspires them with some incredible, beautiful, burning religious experience and makes them sway from side to side like gospel singers in ecstasy.

There are as many interpretations of ways of generating religious experiences and of meditation and prayer as there are yoga teachers and church leaders. To Sikhs, meditation is the act of calming and opening the mind to allow the blissful presence of God into the mind. To many Hindus, it’s the act of removing the constructed, obstructing ego to allow each person to see and blissfully feel the unity of the divine inside – the soul – and the divine outside – all other souls, God.

Indian religions – including Buddhism – lean towards religious relativism in the way that Abrahamic religions tend towards unique claims on truth. The famous story of the blind men and the elephant stems from South Asia and is common to many traditions. The way I was told it when I was little, the king of the land gathered seven blind wise men and told them that they were to describe what the creature was. Each is led to a different part: the hard smooth tusks, the thin whippy tail, one of its broad, wrinkly sides and so on. Each reports back to the king accordingly, that the elephant is long and sharp like a tooth, or ropey and hairy and snake-like, or massive and flat and uniform. But the wise men are not, in fact, all that wise, and are ensnared by ego: they fall into a huge argument, and don’t recognise that each one just had a different angle on the truth.

The story is usually used to talk about God, or sometimes about religion in general – it might be influenced by the general leaning in Indian thought towards denying the existence of the self and teaching methods to realise this, and by the arguable tendency to place experience of the divine before theory about the divine.

I think it can tell us a lot about the practical side of things, too. Humans can feel intense calmness, bliss, compassion that goes past what we expect in everyday life, and they can feel the experience of worship and devotion. I am, to be frank, taking ideas wholesale from one branch of Buddhist Modernism, from the writings of Theravadin scholars like K. Sri Dhammananda and Nyanaponika Thera. These feelings can be mixed up in all different ways and sometimes fall under the umbrella, then, of religious experience.

Watch a non-theistic Buddhist monk quietly chanting mantras, eyes slightly rolled up under their lids and body moving softly from side to side in their absorption in the devotion and the sounds. Look at gospel singers dancing and really, really praising God. Or people of any faith in sincere, intense prayer, heads bent over their clasped hands and chests slightly heaving, or people of no faith meditating on concepts that bring joy, like being immersed in the excitement of each moment of being alive, or unqualified gentle self-love.

The scholarly parts of each of these traditions try to describe this experience in all sorts of ways, combining it with other concepts in their attempts to understand the world – but the core feelings, the qualitative experiences of being ‘near God’ or ‘immersed in meditation’ or whatever you want to call it, are the same. Atheists, non-theists, monotheists and polytheists of all sorts can all have powerful, wild, often psychologically beneficial ‘religious’ experiences, and it’s this experience that some people call God, and others meditation, or ‘samadhi’ (absorption), or prayer, or ‘devotional psychological flow’ or absolutely anything else.

To bring this right back to swaying, where we started, I think you can extend this beyond the territories we see, by our perfectly reasonable conventions, as the religious ones. The disciples at the Pentecost were clearly in some sort of ‘divinely’ inspired religious ecstasy. ISKCON devotees – better known as Hare Krishnas – sit and rock from side to side or use dance and chanting and drums and the power of loud group worship to drive themselves into a similar state of bliss, seeing it as filling themselves up with the awareness of the universal Lord, who runs through everything like the string through rosary beads. You might equally describe it as toss-ing yourself headlong into primal dwelling in the present moment, abandoning rationality through rhythm and dance and the power of the group to allow the individual chattering mind to slip away, leaving space for the thrill of moving and living and the bliss and ecstasy that comes with it.

Swaying, ecstatic, ‘orgiastic’ worship is found all over the place, too – sometimes fuelled by tambourines and vegetarian cooking as with the Hare Krishnas, sometime by stronger intoxicants, such as the Bacchic rites. And when you are literally mindlessly drunk or otherwise unsober in whichever club you’ve gone to, and something you really, really like comes on, tell me you don’t sometimes – for a second – lose your sense of self. Tell me that when you’re dancing at your most wild and most excited and happy, you aren’t, partly, dancing for the joy of dancing without needing to think, celebrating that you can find joy, finding some kind of everyday glory in your experience of that moment. This might be wildly wrong, but I think that there’s just as much experience of God in Plush as there is in any church. 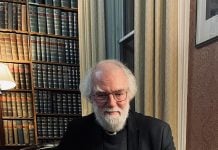