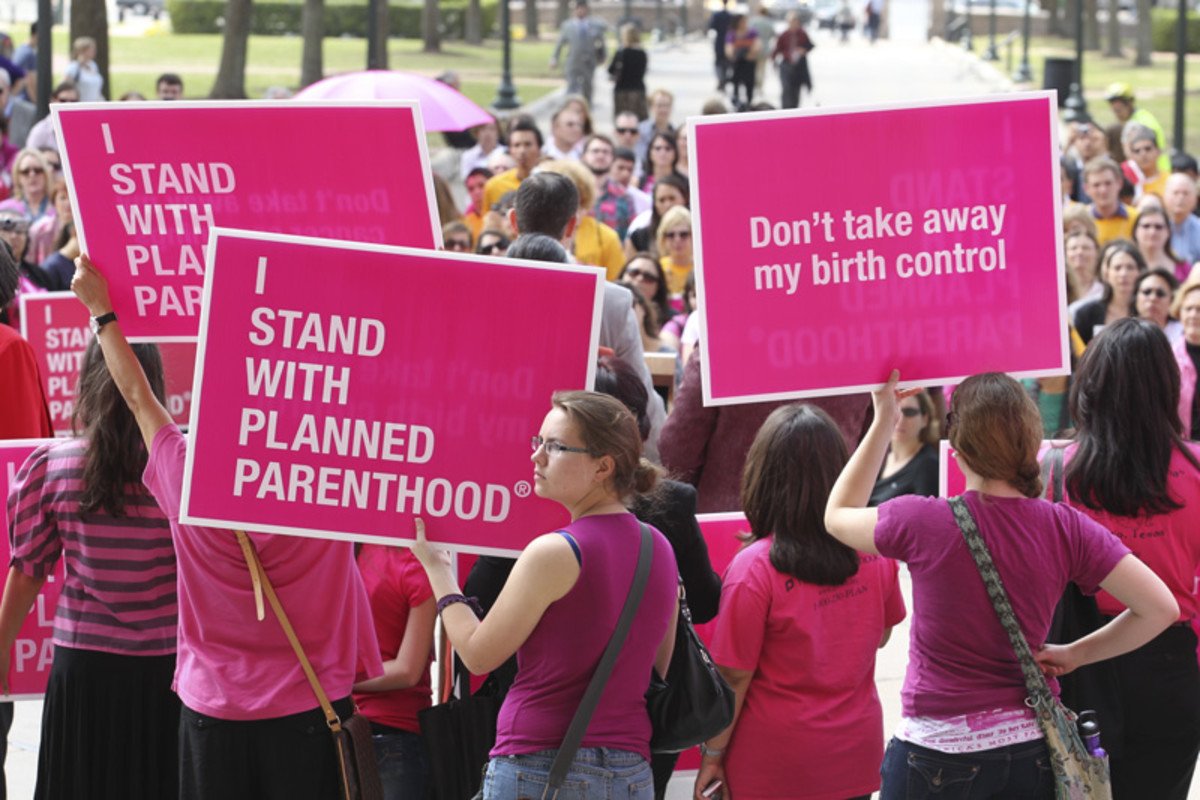 It is a sad state of affairs that women are having to tackle the same issues in their art today as they were 30 odd years ago in the United States. In 1989, Barbara Kruger produced her potent poster in support of women’s reproductive freedoms—‘Untitled (Your Body is a Battleground)’—for the Women’s March on Washington DC that April. The rally took place amidst wider national demonstrations protesting new anti-abortion legislation that undermined the 1973 Roe v. Wade ruling (legalising abortion at a federal level in the US, up to the third trimester). Though tied to this specific moment, the image’s scarlet slogan still rings through resonantly today.

Three decades on, legislation has regressed again and artists like Zoe Buckman, Katrina Majkut, and Niki Johnson are still challenging male-led legislation on women’s reproductive health more overtly than ever in their respective works. With Trump’s executive order to reinstate the Mexico City Policy that terminated federal funding to international groups providing abortions and his explicit pro-life comments in mind, the conversations these works initiate are now more important than ever.

The artists explicitly grapple with choice and ownership of our bodies from the driving seat, and their works put up a visual fight, forming part of the wave of activism now all the more alive in the States, that is presenting a formidable front to the President. Reactionary art of a similar nature has taken the country by storm since the election, typifying the force art possesses when it collides with activism.

Zoe Buckman has recently occupied one of these shows in Project for Empty Space’s new area for political protest art—‘Grab Back: Feminist Incubator Space’—established as a direct result of the ‘travesty of the election’. Her solo-exhibition entitled Imprison Her Soft Hand displays numerous works from her collection ‘Mostly It’s Just Uncomfortable’, which engages unabashedly with reproductive rights and resilience.

Inspired by the changes to Planned Parenthood, the pastel-coloured, powder-coated gynaecological instruments that form part of the series spark discussion about women’s ownership of their bodies, as the artist has reclaimed ownership over these sterile objects by repurposing them in a more friendly and feminine manner. Concurrently, the baby pink speculums and pale blue forceps detract from the cold harsh metal of the objects and equally harsh attitudes surrounding abortion practises. Utilising these objects as (slightly) more welcoming sculptures, Buckman hopes to change negative perceptions of the often life-saving procedures they perform.

Gynaecological instruments are unsurprisingly a common theme in art fighting anti-abortion legislation today, and are similarly depicted in Katrina Majkut’s work. In her series ‘In Control’, the artist artfully cross-stitches images of contraceptives, STI medications, and surgical tools. Much like Buckman, Majkut’s work initiates conversation about ownership and takes back control over women’s reproductive health. Needlework is a traditionally feminine art—her choice of medium stridently highlights the importance of choice, and that men have no place in legislating on women’s reproductive health.

Also part of Buckman’s collection is an antique examination chair—‘The Oxford Chair’—reupholstered in vintage lingerie. Accompanied by a sound piece fusing together clips from the artist at the boxing gym and giving birth to her daughter, it binds femininity with resilience, serving as a powerful symbol of female strength. Similarly, bubble-gum pink boxing gloves, mint green bindings and red metallic mouth-guards cast in resin are intermixed and juxtaposed with the surgical objects. They combine the typically masculine and feminine, and serve as a reminder that far from being passive, women are in control of their bodies, and will come out fighting for their rights.

Resistance is another prevailing theme in much of the activist art attacking anti-abortion legislation. In a commanding nude, Niki Johnson encapsulates the idea that even when torn down, women will rise-up again. ‘Hills and Valleys’, the feminine form in shades of emerald and white, is constructed from Planned Parenthood signs that were collected from the organization’s closed offices in Wisconsin. As it was a hefty task, the artist sent out a request on Facebook for volunteers to help in the work’s production. Created as a group effort, the nude exalts the value we place on women’s reproductive rights collectively and is a symbol of empowerment in the wake of State cuts.

Women’s bodies are still very much a battleground for reproductive rights, but when activism and art collide so forcefully like this, one can be hopeful that this will not always be so. Whether it be Buckman’s pink speculums or Majkut’s embroidered condoms, these works all confront us with the fact that our reproductive health is our choice alone. Putting up a fight, they show no legislation will stop women from claiming back what is theirs. As PES’ new gallery’s name so brilliantly tells, “Grab them by the pussy” Mr Trump, and they’ll grab back.