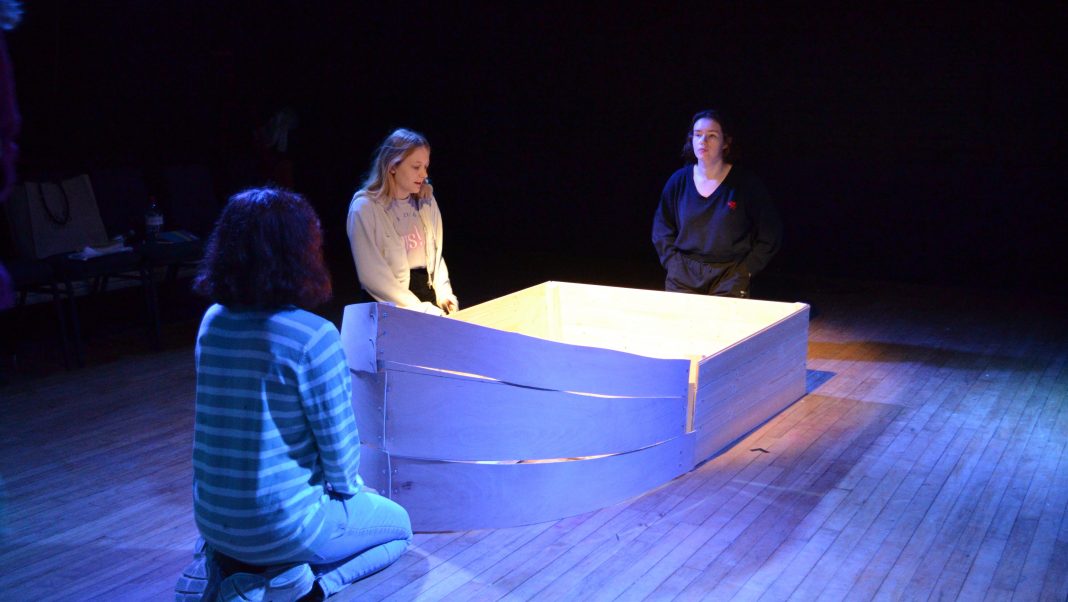 ‘I wanted to put my body into these words’

Emily Berry’s 2017 Stranger, Baby, is one of the most adored contemporary poetry collections to emerge in recent years. There is thus something quite remarkable in Maya Little’s restaging of the collection as a play, a devoted love letter to Emily Berry’s meditations on loss, mourning, and the sea.

Stranger, Baby, opens with the line ‘I stood at the dangerous shore’, and it is from the very first word that Little’s adaptation complicates the original text. Three actors stand on stage, another yet to enter. Exactly who represents this poetic ‘I’, is dissected throughout the adaptation, questioning how we stage the poet’s voice alongside alternate influences. In Berry’s poetry, these influences include her mother, Sigmund Freud, as well as disparate versions of the self, but no actor clearly represents one singular voice. What was one voice becomes four, with the language of the collection brutally dislocated and lines being torn away from actors who rarely get to finish words without interruption.

While the acting and use of lighting are impressive throughout the show, it is sometimes the use of objects on stage that cannily articulates Berry’s collection most movingly. The mirror, for example, is one of the craftiest props of the show. Even though the poetic voice has already been strained through the presence of four actors on stage, we see each character doubled through the mirror. Not only that but the audience can see their own reflections staring back at them as if they are included in this image of the self. After months of rehearsal, the mirror is blemished with fingerprints, highlighted by harsh stage lights, but it serves a metaphorical purpose, too: ‘Never look at yourself in the mirror when you’re crying / I did not follow her advice.’ We can see how many times the poetic voice has failed her mother’s instruction. What we see in the mirror is the reflection of how many impossible selves it takes to grieve.

Another notable object onstage is the wooden boat. The text of Stranger, Baby is distinguished for its continual references to water, with Berry’s poems drenched with tears and brimmed with memories of mermaids, tidal-waves, and rivers. One of the most affecting moments of the performance is when Abigail Casson, potentially the stand-out member of an admirable ensemble, is doused with a cup of water, but while the characters repeatedly speak of the sea, we see such a small presence of water on stage. A boat without water figures as a coffin and a bed, but never really as a boat. Little finds new ways of reading absence and presence into Stranger, Baby, and such clever staging is striking.

For audience members who are unfamiliar with the poetry collection, the play potentially dangers on being too abstract, too conceptual, too niche. Yet for someone who has read Stranger, Baby, or someone who has been touched by the story of grief, this adaptation is a poignant revision of a modern classic. It might even encourage an audience unfamiliar with Berry to pick up her work. The text is no less rich and eerie when performed on stage, as the dramatic adaptation of Stranger, Baby is a veneration of the gorgeous polyphony of Berry’s poetics, and a most heartfelt invitation to pick up more poetry.