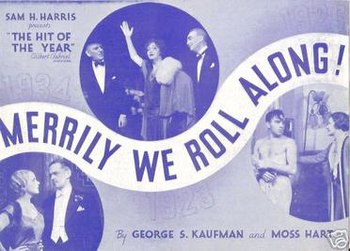 Merrily We Roll Along begins with a bang – the peak of Franklin Shepard’s career as a Hollywood producer while he relaxes (and then enters crisis mode) on a yacht, the smash of a glass by Mary who once was a brilliant novelist and now drinks with jaded glares at the naïve stars of the future, and the emotional crash brought on by a sycophant mentioning the success of Charley in New York. Charley, Mary and Franklin were once the closest of friends, dazzled by the possibilities of the future but torn apart by its realities. Merrily We Roll Alongsteps backwards, tracing their friendship from the show’s beginning – in 1976 – to 1957, when they meet to gaze at Sputnik.

For a musical covering almost two decades, the costume department has achieved a remarkable feat. Recognisable fashion ‘moments’ are highlighted – a headband here, a beehive, padded shoulder or big earring there. This combines with inventive notations on the set (‘1976’ is emblazoned on a sun umbrella) to makes tracking the reversed chronology simple.

What’s most significant in Merrily We Roll Along, though, is the acting; it’s the chemistry and camaraderie of the trio that makes the musical work. Franklin (Emilio Campa) is believable both as smug success and naïve newcomer; his interactions with his son are especially touching. Charley (Joe Winter) has incredible physicality and expressiveness, particularly in “Franklin Shepard, Inc.” but balances the comedy with delicately touching moments of pathos. Mary (Maddy Page) is wonderfully nuanced, with a presence that draws the eye every time she’s on stage. As friends on a rooftop, staring into the sky while carrying their hopes for the future, the three are full of possibility, bouncing off one another. By the end of their friendship, Mary and Franklin are using their words as sledgehammers while Charley is notably absent, silenced by the rift between them.

The ensemble is cohesive and synergistic, especially as ‘The Blob’ – a raucous mass which satirises American theatrical culture. They’re energetic and enthusiastic, pulling the audience back through time, taking the initiative to solve minor inconveniences with props. In particular, Ellie Cooper and Darcy Dixon stand out amongst the group.

The sound engineering leaves something to be desired – the squeak of microphone interference and a lack of proper dynamics occasionally meant significant moments were missed, though I’m sure this will be resolved in future performances. However, the use of lip-syncing for the radio broadcasts is inventive and excellently performed.

As a student, the message of Merrily We Roll Along becomes personal, showing the limits and risks of ambition for success at any cost. Write a bestseller, you might never do it again. Compose a musical and you might become a sell-out. Peel under the surface of apparent glamour or success and the cracks – and failures – start to show. In spite of this serious message, Merrily We Roll Along is hilariously performed, sure to cheer you from any essay crisis or disastrous tutorial. Gussie (brilliantly played by Grace Albery) asks Franklin to ensure a musical is “fast, loud and funny”. Merrily We Roll Alongcertainly fulfils those requirements.