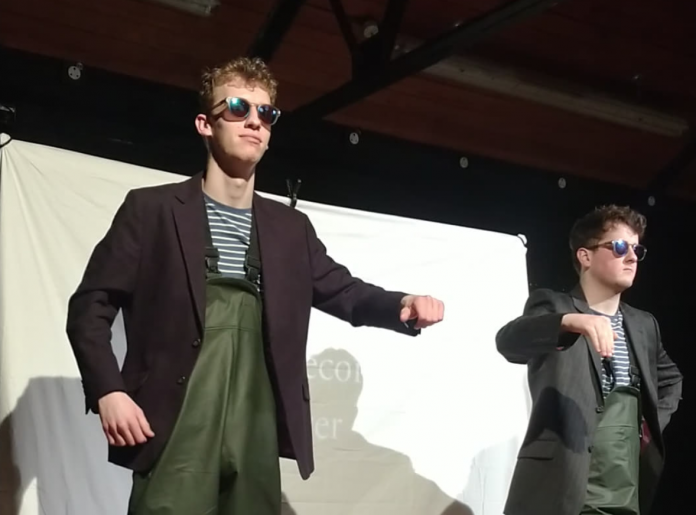 Planning a holiday soon? Why not visit the prosperous, democratic and perpetually joyful nation of Orgislavia? They’ve hosted the Olympics for hundreds of years and I would visit myself but journalists have a rather nasty habit of disappearing… Luckily, Ünkel (Tommy Hurst) and Gårf (Matt Kenyon) are currently in the BT Studio with ÜnkelGårf on a grand state-sanctioned international tour, ready to introduce the world to Orgislavian culture through the art of mime. The two may be (slightly) more familiar to you as the duo behind Beef Comedy, part of the Oxford Revue. Their chemistry is fantastic. They bounce off each other – sometimes literally – like rubber balls. Speaking of balls, ÜnkelGårf is full of innuendo which is about as subtle as a sledgehammer (but hilarious). There’s fetish gear and salacious physical comedy – what a combination. There’s also twists and turns aplenty in this dark character-based comedy which are darted over, immediately moving onto the next moment of shock.

World-building is pivotal here; Hurst and Kenyon immerse us in a feverishly chaotic yet believable universe. Somehow, the realities and lies of Orgislavian life seem realistic. Perhaps it’s a worrying reflection of political developments which plunge us further into uncertainty, making this world appear more and more possible. Perhaps it’s instead the minimal set which adds weight to this suspension of disbelief, although the sheets used as a make-shift projector screen occasionally contribute to distortion of the projected film. The films themselves, though, are artfully scattered throughout the narrative. With contributions from Frankie Taylor, Angus Moore and Ali Muminoglu, these are snappily witty and a much-needed break for Hurst and Kenyon, who are constantly in motion when the lights are on them. It exhausts me just to watch.

The two of them are electric, throwing themselves around in order to showcase their best mimes. They toy with the boundaries of physical comedy and then throw them out the window. Kavana Crossley’s sound design adds to the comic effect. The show begins with a musical sequence only made possible through a fantastic soundtrack and precise timing. Hurst is cynical and direct as Ünkel while also brotherly; Kenyon, as Gårf, is gullibly playful. Both Gårf and Ünkel develop throughout the show; they perform on a double-level as mimes and deeper performers. For a show that’s less than an hour, ÜnkelGårf takes the audience on a long journey.

Agnes Pethers previously directed Hamlet at the O’Reilly Theatre. Despite this shift in production scale, Pethers appears unfazed to direct in such an intimate space. It’s used skilfully – Hurst and Kenyon step out into the audience, pulling faces at certain members but also remain aware of the constrictions of the staging. It’s a delicate balancing act but one that pays off well.

Witty, dark and frantic, ÜnkelGårf is a delight and hilarity to behold. Freedom of the press be damned; if ÜnkelGårf reflects the fun of life in Orgislavia, then I’m on the next plane out.