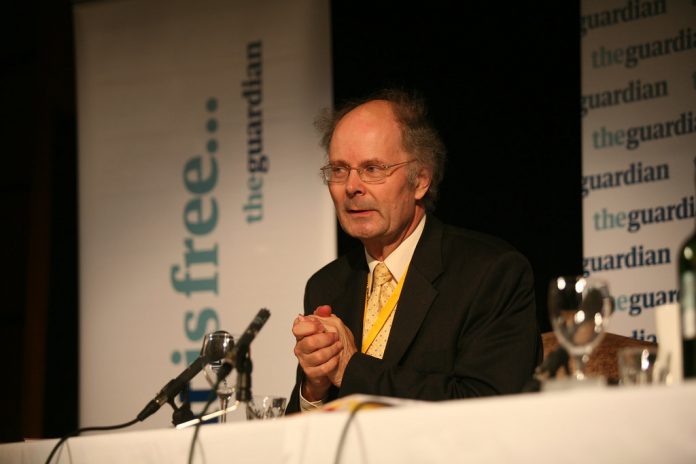 Remind me never to do an interview again. Not that speaking to Sir John Curtice – Professor of Politics at the University of Strathclyde, Britain’s leading psephologist, BBC election analyst and all-round nice guy – wasn’t deeply enjoyable. I’m an election-nerd, he’s the doyen of elections so there’s no way our chat would not be enlightening. But whilst I’m very marginally enlightened in psephology (the science of elections, for the uninitiated) I’m deeply unenlightened technologically. Failing microphones, bad signal and Skype mishaps almost conspired to prevent our interview. Fortunately, Sir John had a saint’s patience, and once Eduroam pitied me, I settled down to chat with a man who has forgotten more about elections than most PPE students will ever know.

Professor Sir John Curtice is most well-known as the BBC’s go-to election analyst. Like a psephological Rachel Riley, he crunches the numbers, works out the swing and tells Huw Edwards what the hell is going on. He’s been a reassuring presence on our screens, and a popular one. Despite his insistence to the New Statesman (Cherwell’s less highbrow older brother) that he “didn’t want to be a media celebrity”, Sir John’s polling wisdom and Professor Branestawm looks has meant he’s acquired a big social media following, including Twitter’s remarkable page “Is John Curtice on TV?”. His fame is well-earnt though; through exit polls and quality analysis, he’s successfully predicted general elections for BBC viewers since 2005. With his interest and involvement in elections going back much further.

“My first political memory is the death of Hugh Gaitskell and the subsequent Labour party leadership election. I followed the 1964 election, particularly the day after when it was quite close and we weren’t sure whether they were going to get a majority.” Nail-biting election results aren’t a recent development then. Before long the future Sir John was at Magdalen doing PPE, revealing “I was clear it was the politics I was most interested in.” From there to graduate studies at Nuffield and an eventual PhD which was on the Liberal Party. It was here Sir John was first pulled into the election-telly nexus. At Nuffield he was taught by David Butler, “the telly Don of his age”, as Sir John put it, and his 1970s equivalent, essentially. It was through Butler’s ubiquitous television appearances that Sir John became involved in the glamourous world of BBC election analysis. His job was “to sit behind [David] in the BBC studio in 1979. My primary job was to sit with a programmable calculator and be able to calculate the swing very quickly, should the BBC computer system go down,” fortunately, “it did in rehearsals but actually didn’t do so on the night.” His first job, “was looking at what’s going on and trying to provide the occasional piece of advice. Most of which he largely ignored, but there we go.”

It was characteristic of Sir John to play down his undoubted brainbox status and play up his luck. But his first big break at the BBC came from his own initiative. With a colleague at Nuffield, he persuaded the BBC to let him give an instant analysis of the 1981 London Council elections using the Oxford university computer. Leaving aside that it was the University’s sole computer, what Sir John was doing was ground-breaking for British television. It might sound old-hat now, but “instant analysis for television was at the cutting edge of what you could do with digital technology” then. After that symbolic entrance, Sir John has “been involved on the production sides of BBC elections for the last 40 years,” he states, “the rest is history.”

Indeed it was, as Sir John has had a front-row seat at every election since Mrs Thatcher swept to power in 1979. So with all that experience, I asked Sir John if he could provide any historical comparisons for last year’s remarkable election result. How similar was the Tory smashing of the so-called “Red Wall” which was erected in Blair’s landslide of 1997, where, as with Johnson’s capture of traditionally Labour seats like Workington in 2019, Blair (“Call me Tony”) took seats like Enfield Southgate which were supposed to be as solidly Tory as a strongly-worded Port and Policy speech…

Sir John was sceptical, revealing “it’s certainly true that in 1997 Labour won constituencies it would not usually be expected to pick up. One example is Scarborough. I remember a Channel 4 news thing going off to Scarborough and the interviewer saying that according to the opinion polls the Labour Party could win Scarborough. It seemed incredible but Labour dually won Scarborough. I think what happened in 2019 is probably more analogous to what happened in Scotland in 2015.”

That was the year the SNP swept 56 of Scotland’s 59 Westminster constituencies, overturning decades of Labour dominance. “The point about some of the seats the Labour party lost in 2019 is that they had become more marginal relatively recently,” he said, “in many ways 2019 is the end of the story because these were seats were moving away from Labour under Tony Blair and Gordon Brown. They moved further after Brexit. The loss of Leave voters by the Labour party is partly the story in these seats.” Comparing to the Scottish story in 2015 he echoed, “the analogy, of course, is that the 2014 Scottish independence referendum destroyed Labour’s longstanding electoral basis in Scotland. Sure, I think in 1997 in terms of seats, but in terms of the consequences from a referendum then 2015 in Scotland is probably the closest analogy.”

I asked, what was it that’s been driving voters away from Labour? and “therein lies the long tell.” Sir John started by unpacking Labour’s experience in Scotland. Rather than shooting the nationalist fox, New Labour’s devolution settlement meant what “we discovered fairly rapidly was that if you provide an environment in which the question is who can best run Scotland as opposed to who would be best to send to Westminster then voters gave a different answer.” As Labour stumbled, the SNP built up support, winning a majority at the 2011 Scottish Parliament elections. This got them the thing they most wanted (asides from a Braveheart sequel), an independence referendum. John continued, “the problem for Labour, once we got into the independence referendum, was twofold. One is that independence is not simply a left/right issue. Labour is a party that exists to articulate arguments about inequality and the role the state should play in dealing with inequality. It struggles when you’re asking questions about constitutions.”

It was, of course, time for that dreaded B-word, and just why so many former Labour voters backed Leave in 2016 and Johnson in 2019. John revealed that “academic research essentially says Labour’s problem among working-class voters is the combination of Blairism and Corbynism” and thus we can see, “on the one hand abstentionism amongst working-class voters goes up. Basically, New Labour was perceived to be close to the centre. Labour became seen much less as being working class in its image. So rebranding as New Labour means you start losing voters in these constituencies.” The other factor was Brexit, which caused Labour to lose ground with these voters somewhat in 2017, but especially in 2019. This was because “Brexit is again not a left-right issue. It’s an issue that divides social liberals against social conservatives. Left-wingers were just as likely to vote for Brexit as right-wingers once you define it as the role of the government dealing with inequality in the economy.” That was the crux of it, he says, “it’s an issue that splits the Labour coalition. As we saw in 2019 they tried to sit on both sides of the fence but ended up falling off.”

I was intrigued by the social liberals versus social conservatives point he raised. Remembering I was writing for Cherwell and not auditioning to be a paler, more English and less talented Andrew Neil, I asked if he thought the impact of more people going to university than ever before both explained the instinctive social liberalism of young Brits and their greater likelihood to back Labour and Remain. He revealed, “it’s old versus young and it is university educated versus those who with little in the way of education or qualifications. These things are related, but… independently.” He goes on that, “there’s what I call enculturation. Younger people have been brought up in a society and educational system in which they’ve been socialized into the idea that the UK is a multicultural, multiethnic country.” He states that “the second cultural thing is that the experience of university tends to make people more liberal. So there’s a cultural thing going on, but there’s also a real interest difference.” Sir John explains how younger people with university qualifications are more likely to migrate than those older voters, and that was “reflected in the Brexit referendum”.

Is it as simple as that? Are we stuck with the inter-generational conflict in Britain? Sir John laughs, well “that’s the $64,000 question about Brexit and immigration: to what extent are these issues going to continue to dominate our politics. It’s something to which we don’t know the answer.” He explains how getting Brexit done doesn’t mean the future’s all bright for the Conservatives. The strong identification of voters with Leave and Remain means that these polarities might take a long time to shift. But as they skew older, the Tories can’t rely on Leavers forever. “At the moment everybody’s going around saying ‘Oh God, Labour’s in a terrible state’. Let’s think about what the future looks like for the Conservative Party. Unless Conservatives can make ground in your generation and those not so much older than you then they are going to be in trouble.”

I asked, surely, despite all the anxiety, this must have been a great decade to be studying elections? “Yeah, especially a psephologist in Scotland. It’s an extraordinary political time.” Sir John started to get philosophical (as well as psephological) at this point, pondering “it’s fascinating that much of the debate about Scottish independence and about Brexit are about relatively familiar themes. They’re both about sovereignty, about identity, about whether you’re better off on your own or in combination with somebody else economically. The major difference is that Brexit was about immigration and the Scottish referendum wasn’t, but there’s a credible similarity in these arguments. They are intense arguments that cause very high levels of political debate. And to that extent, yes. Of my six and a half decades, certainly, the last decade has been the most interesting.”

With that Sir John was off. Whatever the next decade holds politically – another four elections, another Scottish Independence referendum or a second EU Referendum, having Professor Curtice presiding over the results will be a reassuring constant in the sea of political lunacy. Long may he continue.