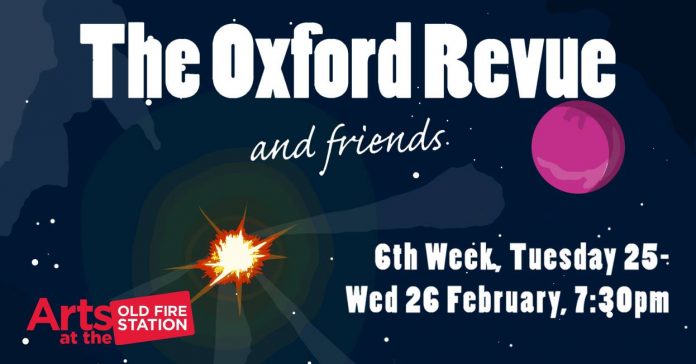 To keep an audience laughing consistently at amateur comedy sketches for over two hours is the impressive achievement of the cast of ‘Oxford Revue and Friends’, which was shown at the Old Fire Station Oxford from the 25th to the 26thof February 2020.

Described in the sales pitch as ‘an eclectic mix of satire, silliness, and strange characters’, numerous skits pushed audience-members to lean over to their neighbours and whisper ‘what?’ – thankfully in hilarity, rather than with disdain.

Whilst the Bristol Revunions and the Durham Revue did not feature on the opening night, splitting the time between three remaining acts resulted in a good grasp on the central conceits of each team’s performance. And I use the term ‘team’ here to reflect the sense of good-natured competition which accompanied the comedy of the evening (and ultimately conceded the supremacy of the UCL Graters).

Given the announcement of Joël Stanley as compeer and ‘a black man at that’ in pre-show advertisements, I feared that he may gain laughs in the manner of a young Lenny Henry by ‘getting in first’ with self-deprecating jokes (as described in the BBC documentary ‘Imagine’). However, his endearingly nervy and energetic introductions did just the opposite, reminding audience-members that watching awkward, experimental theatre with your parents, going on disastrous first dates, and avoiding dodgy-looking people on dark streets are universally implicating experiences. Asking rhetorically what it was about himself that the audience should already have noticed, Joël dealt admirably with the response that his bare feet were the most notable aspect of his appearance, despite being caught off-guard by the interjection.

The Tuesday-night performance included the UCL Graters, the Cambridge Footlights, and the Oxford Revues. The UCL graters provided a fluid series of twelve, highly-varied sketches and switched quickly and convincingly between a multiplicity of character-roles. Of-the-three, their work contained what I felt to be the most impactful satirical jibes, which were directed at figures ranging from the ignorant boss unaware of work-place discrimination, to the fascination of documentary hosts with atypical relationships. Highlights include a sketch about a slug, an X-factor-style sob-story about living life with the permanent companionship of a backup dancer, and John and Edward from South London lamenting their lack of Gucci sliders and chastising their bitch-of-a-mum who refuses to give them a lift home from the marshes (that’s peak bro indeed).

The Cambridge Footlights had fun on stage and their excitement was infectious. However, opening with a gag about UCAS applications very much set the scene. A focus upon satirising student-life in front of students who already do a good job of ripping each-other to shreds with similar, although less nuanced, jokes was perhaps treading too-familiar ground. However, the character of the girl who insists that she’s ‘not like other girls’ because she likes the Beatles was well-done, as was a sketch on a loved-up couple looking to escape university accommodation and set-up-camp together.

After a slow start, the Oxford Revues impressed with their dark re-workings of childhood classics and their use of a porous fourth wall through which they poked fun at the very act of student acting; wrong lines, awkward framing devices, an otherwise stressful life – they brought attention to all. Sketches on Disney’s Pluto ruled by a tyrannical Mickey Mouse, hobbit-Frodo trading in a gold ring for some new trainers, and Oompa Loompas summoning union-action against Willy Wonka were carefully thought-through and delivered.

There were too many Michael Jackson jokes, granted, but to Alison Hall, who called out the student journalists of the audience, this review is intended to be better than luke-warm!